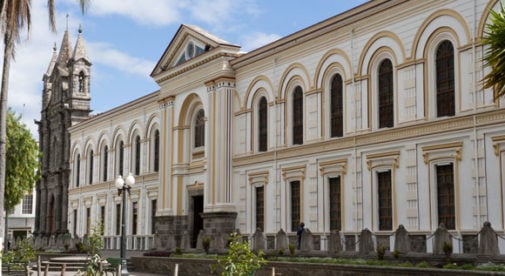 There’s a small city in Ecuador that you might never have heard of. But if you’re looking for a retirement destination, it’s got a lot to offer.

Called Ibarra, it’s Ecuador’s northernmost mountain city. You’re not alone if it’s unfamiliar to you. Though I, and several hundred other expats, live just 30 minutes away in the small town of Cotacachi, Ibarra gets too little attention considering how attractive it is as an expat destination.

Why doesn’t it get the recognition it deserves, you ask? Well, it’s partly because Ibarra lost much of its original colonial architecture to an earthquake over 100 years ago. Not that you’d notice much—the buildings that replaced the wrecked ones are a pretty good replica of colonial style.

The main reason though, is that its few expats have kept their town a well-guarded secret.

That secret is beginning to leak out as more and more people discover its offerings. First, the city itself is spread through a valley that is lower than the one in which Cotacachi sits. That makes Ibarra noticeably warmer than similar highland destinations yet still not hot.

The city proper is alive with activity and in recent years has been making a concerted effort to stay current. A new modern shopping mall attracts consumers with upscale clothing stores, sporting goods outlets, dining options, and a large new movie theater—all at the affordable prices Ecuador is known for. An old airstrip has been converted into a park that is home to reflecting pools, jogging trails, and artistic sculptures.

But, if you’re not a lover of all things metropolitan, you can simply head to the outskirts of the city where you’ll find fincas (farms) of all kinds or old haciendas with stables and plenty of acreage to explore. Plant nurseries are abundant and the owners are always anxious to help suggest decorative or fruit-producing trees for your own home. And just up the mountainside, near Yachay where the newly established mega-University is housed, are thermal springs set in one of the world’s most scenic and lush settings.

You’ll find some very affordable property here, too. Rental properties vary, depending on size, location, and furnishings, but you can expect to pay between $300 and $600 a month for a comfortable place.

Buying is very affordable, too. On a recent trip, I found a newly built townhouse, with mountain views and over 2,300 square feet of living space, for $125,000. I also found 5,000-square-foot lots near the thermal springs starting in price at $8,500.

I’m uncovering this little-known gem piece by piece. And, each time I visit Ibarra, I’m surprised at what I find. Sometimes I stumble across a new restaurant like the Canadian-inspired Caribou Bar and Grill with its carnivorous fare. Other times I find a specialty store like the Hong Kong Market where I can load up on fresh vegetables, wonton wrappers, and artisan chopsticks. And sometimes I stumble across a section of the city I didn’t know existed.

That’s how it went down a few days ago when I found myself near Parque de la Familia (Family Park), a several-block stretch of sports-centered activities. At first glance, it appeared to be just another well-groomed green space with a playground for the kiddies. But, as I continued walking through I found tennis courts where a father and son were practicing their serves. A little farther on, I came across a basketball court with teens deep into a friendly game. This was under the shadow of a huge multi-faceted rock climbing wall. And just past that was a large dirt BMX bicycle track where heavily padded youngsters were finessing their jumps.

I’m not sure what I’ll find the next time I hop a bus to Ecuador’s “White City,” but I do know there are plenty more secrets waiting to be discovered. And when I find them I’ll be sure to let you in on the news because in my book what good is a treasure if there’s no one to share it with?