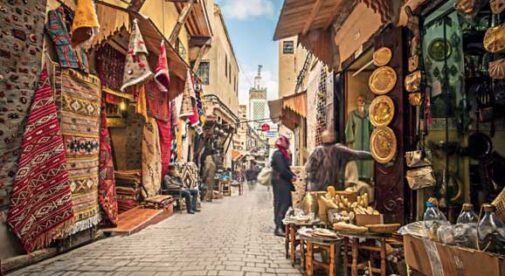 When considering a place to retire overseas, Morocco doesn’t usually spring to mind. After all, this northern African nation is often imagined as a dangerous, poverty-stricken desert kingdom, where women’s rights are suppressed, and religious and social tolerance simply doesn’t exist. And living there without speaking Arabic would surely be, well…inconceivable.

But Beverley and I heard that modern life in Morocco is very different from these long-held stereotypes. Apparently, many adventurous expats have chosen to embrace life in a country with a remarkably diverse landscape—from dry deserts, lush cedar forests and cool mountains, to coastal towns and sunny beaches, all at an incredibly affordable cost of living. They claim it’s safe, the government stable, the infrastructure modern…and that English, French, Spanish, and Arabic are all widely spoken here.

So, Beverley and I took a leap of faith across the Strait of Gibraltar to get some answers, separate fact from fiction, and investigate Morocco’s potential as a viable, and rewarding, retirement destination.

When we arrived in Fez, Morocco’s third largest city and former capital, it was 48 F, overcast, and pouring rain. It was the first time our boots had hit the ground in Africa—and, feeling the damp chill in our bones, we felt deceived by our grade school teachers. (The world’s second largest continent is not always as hot as Hades!)

Our cabbie was Mohat, a friendly, bearded, 60-something Moroccan man, cloaked in a white Kafkan (a traditional Moroccan ankle-length robe), reminiscent of a character from an Indiana Jones film. He drove like one too.

The cab ride was frenetic, with the driver whizzing in and out of traffic, cutting across busy lanes in congested roundabouts, and aggressively playing chicken with daring pedestrians. We weren’t in Kansas anymore!

When we were dropped at the end of an alley just outside the ancient Medina, we were shocked by our medieval-looking surroundings. Men pulled hand carts overflowing with oranges and olives, spilling them over the narrow, bumpy streets, amongst decrepit buildings. Donkeys hauled sacks of grains as cars honked and tried to squeeze around them, while robed men carried chickens, dangling at their sides—all amidst the noisy chaos at food kiosks that resembled NYC newsstands. It looked like a project in east Chicago about 150 years ago!

After scanning the scene with obvious concern, Beverley nervously asked, “Is it safe to get out here?”

Wondering if the taxi driver had made some sort of grave error, I wasn’t sure how to answer. After all, this was supposed to be a four-star “dar”!

Could the stereotypes be true after all?

As soon as we stepped from the cab, we were immediately approached by a well-dressed man claiming to be a paid representative of the government’s “welcoming department”. This was our first encounter with a “tout”—a faux guide—who offers “free” assistance or directions with the expectation of a tip, or the purchase of a tour, as gratitude. They can smell newcomers from blocks away and are very adept at scamming tourists. Although he followed us all the way to the dingy door of our traditional Moroccan accommodation, this tout got nothing.

Thankfully, what awaited us behind that dingy door was a very pleasant surprise.

We were greeted by the pleasant host, Mohammed, who led us to the authentic Andalusian-styled interior courtyard, surrounded by shaded alcoves. The antique mahogany reception desk in the bright courtyard was surrounded by round, linen-covered tables—their three-armed candle holders inviting us for a romantic evening supper.

Our guest suite locked only from the outside, which was a bit unnerving—even more so when Mohammed assured us not to worry, that the unit was very safe, “because he was always watching it”. (Cue the James Bond theme.)

The following morning, Beverley and I strolled through the rustic, white-washed neighborhoods around Fez’s Kasbah, where scenes from the upcoming Indiana Jones 5 movie were filmed just a couple of weeks before. Men riding donkeys, and carrying chickens and roosters down the street, didn’t help to dispel any stereotypes. Nor did our subsequent visit to souks of the ancient Medina.

The Medina of Fez has not changed much over the last thousand years. It’s a maze of skinny, meandering, car-free alleys and lanes, lined on both sides by pushy vendors selling all manner of goods—fruit, meat, pastries, leather goods, carpets, health products, argan oil, clothing…if you can think of it, it’s probably here. It’s a shopper’s dream, but good negotiation skills are paramount— these guys will take you for more than a donkey ride if you don’t know how to play the game properly. I bought a stylish leather laptop bag made from dromedary (one-humped camel) hide for $50 (the original asking price was $120!)

I knew I had to dig deeper if I was to peel back Morocco’s ancient veneer. And since every great explorer needs the help of a local guide, I found one capable of revealing the true Morocco to me.

His name is Karl Mangialardi, a transplant from Pennsylvania who’s lived in Fez for eight years and has scoured its every nook and cranny. He knows all the hidden gems of both the ancient and modern city—where the expats love to hang out, and where only the most adventurous of them dare to roam. Turns out there’s a lot more than what first met my eye.

I was about to enjoy a real revelation.

10 Things I Need in My “Overseas Paradise”

A First Step Overseas on the Cobblestones of Lisbon