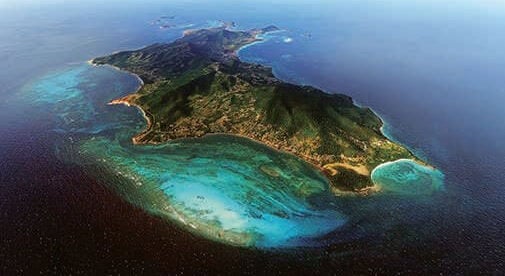 As we’ve vacationed on various Caribbean islands over the years, it’s become a standing joke that my husband, Desmond, will always say of these lesser offerings: “Nice, but they’re no Grenadian beaches.”

I’ve come to appreciate that he has a point.

In Grenada, the water is crystal clear, warm, and calm. The beaches are wide with white sand, and lined with palm trees that provide the perfect shade. Isn’t that the exact picture you have of a Caribbean beach? Truth is, it’s less common than you’d think. Mass tourism in the region makes it hard to find those unspoiled spots—cruise ships and all-inclusives can be fun, but they’re a different vibe. I prefer my quiet island.

I love to snorkel, and even the less-visited coral reefs here are teeming with sea life. On my daily swim, I will see turtles, stingrays, and all sorts of colorful fish. Swimming above the coral reefs is one of the most magical experiences.

I moved to Grenada in October 2021. Why here? I wish I could say that I thoroughly researched all my options for living as a digital nomad and then, through a careful process of elimination, picked this off-the-beaten-track island of 110,000 people.

The real answer is far less practical but far more romantic. While I was living in New York City, I dated a Grenadian for eight years. We’re now married. His plan was always to move back home in retirement, which he did last year. I continue to be domiciled in the U.S. (I rent in St. Petersburg, Florida for when I need to be back Stateside) but I spend as much of the time as I can in Grenada.

Our plan was that we would start building a house. I would also buy a condo where we could live for however long the house takes (which could be a while). Afterward, the condo will be an investment property.

Grenada is still off the radar for many Caribbean vacationers. Close to South America, it’s an almost five-hour plane ride from New York (one of a few U.S. cities, including Miami, with direct flights here). That’s just far enough away to slip past the average U.S. tourist. If anything, there are probably more British visitors and retirees here than from the U.S.

Having visited other, more popular Caribbean islands over the years, I appreciate Grenada because it’s still relatively unspoiled. Though there’s been a flurry of new high-end resorts built over the last few years, Grenada avoids the Vegas Strip-like feel of somewhere like Aruba, or the security concerns of somewhere like Jamaica.

Grenada has been a democratic, independent country since 1974. Crime is very low here and mainly consists of some domestic violence and petty thefts. There’s no need to employ any kind of security here. Some people do keep a guard dog, but I think their biggest worry is that someone will steal bananas off their trees.

While the local patois can be strong and sometimes hard to understand, particularly outside of the central parish of St. George’s, Grenada is an English-speaking country. Locals are incredibly friendly, warm people who have been very welcoming to me, both when I came as a tourist in the past, and also now that I live here. The U.S.-accredited medical and veterinary school St. George’s University (SGU) is the largest employer on the island.

Because Grenada is out of the main hurricane path, having only been hit four times in the last 100 years, it’s considered a safe haven for yachts. Owners will often drop anchor here for the entire winter. Because of this, there are a number of marinas and services for the yachting crowd.

These are also very convenient for non-yachting expats. For example, there are two French butchers located at different marinas. They each have an incredible array of fresh meats and baked goods, imported French cheeses, charcuterie, and wine. While overall prices for food and alcohol are viewed as expensive here, I lived in New York City for more than 30 years. I don’t find the prices at either of these stores much more than I’d expect to pay in New York, and both places offer free delivery.

Almost everything in Grenada has to be imported, though, and this can increase prices on some commodities. Certainly, the cost of cars and gas is higher than in the U.S., for example. But locally sourced food and island-produced drinks like rum can be extremely reasonable.

An evening at my favorite beach bar that includes quite a few glasses of rum, and some fish tacos, usually comes to about $50 per person, including tip.

The more a restaurant or bar caters to tourists, the more expensive it’s likely to be. But one of my favorite restaurants is Dexter’s. A talented chef, Dexter runs this hidden restaurant out of his house. A five-course, locally sourced, fixed-menu meal with a choice of main course and unlimited wine and beer can be as low as $35 a person.

Check out The 5 Best Caribbean Islands to Live On… and 2 to Avoid here.

While Grenada isn’t big, it’s hilly. This really isn’t a place to walk everywhere. Taxis will cost about $15 for the average ride, and there are public buses serving the main routes. It’s also possible to arrange long-term car rentals for about $60 a day.

While it is possible to get visas to live and work here, an increasingly popular option is the Citizenship by Investment (CBI) initiative. There are two main options: a $150,000 donation to Grenada’s National Transformation Fund, or a real estate investment of $220,000 with an additional $50,000 government fee. Grenada’s CBI plan is generally viewed as one of the best in the region, providing various benefits to its second passport holders.

A furnished beachside condo for around $200k.

As you’d expect, housing costs vary enormously depending on how close a property is to St. George’s—the principal town—and whether the property is beachfront. However, if you’re prepared to live in a less sought-after part of the island (which is only 15 miles long, after all), it’s very possible to buy a three- or four-bedroom, single-family house for around $220,000.

Alternatively, there are some condominium options. I’m buying quite a high-end two-bedroom condo in St. George’s. It’s in a beautiful new beachfront development with a gym and swimming pools, where the primary usage will be vacation/ investment properties. I’d say that, at $700,000, I’m paying on the higher side of the middle of the range. However, if you’re prepared to buy a studio apartment, or something older with fewer facilities, it’s very possible to get a furnished beachfront condo for around $200,000. Even these come with terraces, air conditioning (at least in the bedroom), and often have fantastic views.

Compared to the U.S., where average property taxes are 1.1% of the value, they’re a very reasonable 0% to 0.5% in Grenada, depending upon the property, type of land, and valuation.

One of my concerns when planning my move here was the state of the healthcare system. It’s a little run-down. I’ve worked around this in a variety of ways. Firstly, I’ve kept my U.S. health and dental insurance, and plan to fly back for regular checkups and any major care. I then bought Medivac insurance for myself and my husband. For $30 a month, our insurers will guarantee to airlift us out of Grenada (or anywhere else in the world) and take us to a hospital in Miami, Florida.

Finally, I took out a health insurance package through a private hospital to deal with my prescriptions and any minor issues. For a very reasonable monthly amount, I can enjoy a range of preventative care options, get my prescriptions filled, and deal with everyday medical issues that come up. Dental care is so cheap here that I’ll pay for that out of pocket if problems arise.

While I’ve made some lovely local friends here, it’s also been nice to meet other expats. As well as the SGU faculty and the yacht crowd, there’s also a decentsized population of Britons and Americans who have made Grenada their home. Some of these people retired here. Others bought local businesses and integrated themselves into daily Grenadian life with second careers such as hotelier, restaurateur, and dive shop owner.

Time and again, I hear similar stories of people who came here for vacation and felt there was something special about this island. They fell in love with Grenada and found their way here permanently.

What is the Grenadian magic? Yes, the weather is perfect; rainy enough that the island is green and lush, but not so rainy that it’s particularly humid. Then there are the already-mentioned perfect beaches. But the same can be said of a lot of islands in the region. And yet, there really is something special about Grenada.

I’ve been to Caribbean islands where the local culture seemed to have been tidied up and hidden away in favor of a more homogenous “tourist look.” But in Grenada, local culture and heritage are everywhere. Fish is a staple of the Grenadian diet, and it’s common to see fishermen unloading and selling their catch at the main port in St George’s, or boats pulling up at the beach so that chefs can run out and buy fish just pulled out of the sea.

Grenada is a poor country, but it carries its poverty lightly compared to other places in the world. Families are usually very big and used to living in close quarters, so homelessness is rare; there’s always someone prepared to provide a bed. Likewise, begging is unusual. No one ever needs to go hungry here. Breadfruit, mangos, avocados, and so much more can be plucked off trees everywhere.

Grenadians are proud of their history, and of their unique linguistic blend of English peppered with French, Spanish, and African words.

And they’re rightly very proud of their food, which has fascinating roots going back to Grenada’s slave culture and which showcases the island’s produce and seafood bounty. The national dish is a one-pot meat and coconut milk stew called Oil Down, which is tastier than its name implies. This is a dish for a crowd and one that you can often find Grenadians cooking over a fire during a weekend beach party. And you can always find roadside vendors selling roti—a chickpea flatbread with a tasty curry filling, often goat.

If you want a sanitized island destination where every hedge is perfectly trimmed and you can live in a comfortable resort-like bubble, this isn’t the island for you. But if you want to live in a place that wears its rich history and culture proudly…but that also warmly welcomes you to partake, then consider sharing the magic of Grenada with me.