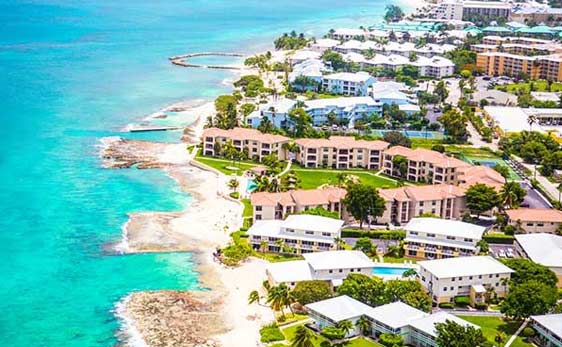 This picturesque little island in the shape of a dragonfly makes a dream-like triangle with its neighborly islands of Cuba and Jamaica. Grand Cayman is actually the largest of three Cayman Islands, an autonomous British Overseas Territory in the Caribbean. The island is also home to the country’s capital George Town, one of the largest economic centers in this part of the world. Museums, galleries and other cultural highlights, such as The Cayman Islands National Museum, Pure Art Gallery, and Heroes Square are all located in George Town. Grand Cayman island is also known as a “financial haven for offshore bank accounts for many international corporations and elites.

To make matters more interesting, the island is also rich in natural attractions and luxury resorts. It is a popular tourist destination and a magnet for researchers of the unique flora and fauna. Not lacking in the cultural department either, it has a large number of both private and government-run schools and universities. Grand Cayman is divided into six districts and the official language is English.

How to get (and stay) there

Since being in a relatively close proximity to other major Caribbean islands, the Cayman Islands are easily reachable both by plane and boat. Large cruisers frequently operate around the island and there are three cruise terminals in George Town, the largest port in the region. Owen Roberts International Airport is the main airport for all Cayman Islands and it operates both inter-Caribbean and international flights. The island has under 500 miles of paved highway and is thus very easy to get around with a taxi or a car.

Grand Cayman is also a popular destination for seasonal workers since there is a limited local workforce on the island. Work permits are granted by the government after a thorough check of a criminal background and medical control. The only major obstacle in applying for a work permit in the Cayman Islands is that you have to get a job on the island before the application process starts.

The island’s unique floral surrounding is considered one of the greatest Caribbean treasures. The majority of amazing island plants can be seen at the Queen Elizabeth II Botanic Park in the North Side District. There you will find many distinct species such as wild banana orchid, ghost orchid, thatch palm tree, various fruits, and many other natural wonders. Cayman Crystal Cave, on the other hand, is a treasure of its own kind. Set in the midst of the tropical forest, this lovely natural wonderland can tell the whole history of the island in an entirely new way.

And then there is the amazing Stingray City, a name used to describe the entire area in the shallow waters of the northern part of the island. The series of shallow sandbars are considered one of the most popular tourist attractions in the entire Caribbean, mainly because the visitors are allowed to interact with seawater animals. Snorkeling and diving with stingrays and starfish are favorite activities among tourists and other adventurers. Naturally, there is several companies on the island that organize excursions of this kind.

Numerous rum distilleries spread across the island also present important tourist hotspots. The Cayman Islands are known for their high-quality rum and most locals are proud of this heritage. And when it comes to drinking games, don’t even try to keep up with them.

How expensive is life on Grand Cayman?

Grand Cayman might be a financial haven for people living abroad, but life here is far from divine. A special currency is used on the island—it is called Caymanian Dollar and it translates to $1.22. The cost of living in the Cayman Islands is a third more expensive than in the United Emirates, which basically means it is way over 100% more expensive than in most European countries and the United States.

Although food and essentials are relatively affordable, rental prices are typically exorbitant. Rent can be anywhere between $1,300 and a whopping $3,300 per month, based on the apartment location and its features. Utilities and other monthly costs are also pretty expensive, including internet, and especially entertainment and eating out. Luckily, the Caymans’ average salaries are compatible with high prices, but sharing apartments with roommates is a common way of living for younger people here.

As is the case with many other small countries of the region, the Grand Cayman offers a plethora of delights, but they come at a pretty steep price. The island is not for those with a lighter wallet, but there’s no denying its numerous charms.