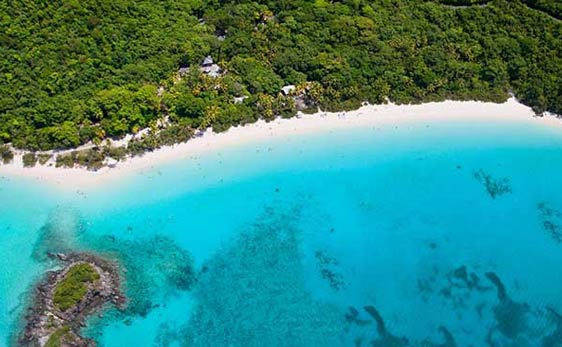 A Tropical Kind of American Dream

For many, this Caribbean Paradise that resides under the U.S. flag presents the dream getaway location. Some would argue that even the great Christopher Columbus himself thought so, since he was the one who named the islands after Saint Ursula and her virgin followers on his second grand voyage back in 1493. Blessed with the tropical climate and wonderful scenery, American Virgin Islands (as many commonly call them) are suitable for laidback holidays and exploring.

Today, they are considered an unincorporated and organized territory of the United States, while their history is marked by turbulent political overturns, most notably in the early 20th century, when Denmark sold the islands to the United States. It is safe to say that the country has, politically speaking, never truly recovered from the trade. Most of its inhabitants are of Afro-Caribbean descent.

Contrary to its turbulent past, inhabitants of the U.S. Virgin Islands nowadays live calmly and rely heavily on tourism and, to a lesser extent, on trade. The archipelago consists of several tiny islets and three major islands of Saint Thomas, Saint Croix, and Saint John. The territory capital is Charlotte Amalie, a town on Saint Thomas.

Where are the U.S. Virgin Islands?

Geographically, the Islands are a part of the Virgin Islands archipelago, which they form together with the Former British colony of the same name. They are located just south of the British islands and are also considered a part of the Lesser Antilles. The closest independent country is Puerto Rico and just like in the many countries in this region, U.S. Virgin Islands suffered significant damage after Hurricane Irma devastated the archipelago in 2017. Luckily, most of the landmarks and national parks reopened in early 2018.

The islands have two international airports, the Henry E. Rohlsen airport on Saint Croix and Cyril E. King International Airport, which serves both the island of Saint Thomas and Saint John. Both airports host inter-country flights as well, since not all major airlines connect all islands. Besides this, tourists frequently visit U.S. Virgin Islands by boats and large cruise ships. The best way to get around the islands is by car, yet it is also important to note that this is the only United States jurisdiction in which cars are driven on the left side of the road—just like on the neighboring British Virgin Islands.

Things to do on the U.S. Virgin Islands

Virgin Islands of the United States are considered some of the greenest islands in the Virgin archipelago. Almost everywhere you look there is wonderful greenery, hills, and bays. Therefore, most of the popular tourist activities are set outdoors, including all kinds of watersports, cruises, sailings, day trips, and hiking tours.

There are many historic sites and landmarks spread across all three major islands. First, there are two little gems called Blackbeard’s Castle and Bluebeard’s Tower. Then there is St. Thomas Synagogue, a rarity of its own kind, as well as the precious landmark called 99 Steps (although there are actually 103 steps). This narrow step street is made of ballast bricks from the ships of the Old World. If you’re into quirkily-named attractions, be sure not to miss hiking trails like Little Lameshur, Cinnamon Trail, as well as the famous Drunk Bay Trail.

The islands are also filled with important historic sites—probably more than any other group of islands in the Virgin archipelago. Among those well-worth visiting are St. George Village Botanical Garden, Annaberg Sugar Plantation, Salt River Bay National Historical Eco-Park, and Fort Christiansvaern.

The cost of living on the U.S. Virgin Islands

American Virgin Islands (particularly the island of Saint Thomas) are considered the most expensive place to live in the Caribbean besides their British counterparts, Bahamas and Saint Martin. Luckily, other islands in the group are less invasive on the monthly budget. For instance, living here is a bit cheaper than living on the U.S. East Coast, but also way more expensive than in the middle of the North American continent. For instance, the average rent for a medium-sized apartment starts around $600, but the rent for a bigger apartment in an attractive location can be closer to $1,700.

Utilities are relatively cheap, as well as other necessities, except public transport which is quite expensive. On the other hand, having fun on the U.S. Virgin Islands could be considered almost luxurious, just like in most tourism-based countries.

A fantastic holiday destination that never fails to deliver on natural wonders, the U.S. Virgin Islands can also provide an idyllic resort for a long-term stay, but it can be quite costly and lacking in other aspects of social life.