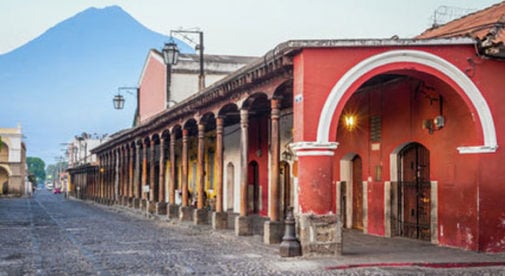 It’s the “slap, slap” sound of contentment: Women making tortillas by hand as I sip a Gallo beer and look out over the water. I can hear a marimba and see children splashing happily on the sun-kissed lakeshore. Several old women in native dress are passing by, carrying large parcels on their heads…hands free.

The most populous country in Central America, Guatemala is home to the Mayan people.

You’ll find Mayans next door in Belize and Mexico, too, but at least 50% of Guatemala’s population are Mayans speaking over a dozen different languages.

It’s largely thanks to these folks that Guatemala has such a rich and unique culture. And it’s this culture that entices many of the expats who have made their homes here. “I love how different it is, and I want it to stay that way, too,” says Jean Johnson who lives in the colonial city of Antigua. “It’s like traveling into some epic or bygone landscape,” says Portland-native John Kin, of traveling around the highlands.

Guatemala is a place of exotic traditions…ancient Mayan gods mix with Catholicism here. You’ll find some local saints are honored with cigars and strong liquor. On the cobbled streets of the country’s preserved 16th-century towns, and in the covered markets, you’ll meet women wearing hand-woven huiples—a loose fitting tunic—each a different pattern depending on their community.

Despite feeling far away from the U.S., Guatemala is just a two-hour flight from Miami. Along with this proximity are other practical reasons expats come here. The clement and forgiving climate is a major plus. In the southern highlands where most people live, temperatures average 70 F year-round and humidity is low. No need for air conditioning.

That means your own maid and gardener ($3 an hour each), regular massages (around $10), dining out on cuisine from around the world (around $20 for a three-course meal), and local vendors delivering fresh produce to your door.

You’ll also find that good quality health care is affordable and available. In Guatemala City, Zone 10 is full of private clinics. Expats tell of five-star treatment in private rooms fully equipped with creature comforts and food so good you feel obliged to visit the kitchens and thank the chefs.

For all that though, Guatemala is still a poor country. A 36-year-long civil war that ended in 1996 left the country in a bad way and first-time visitors—including myself—ask about safety. Well, every expat I spoke to was tired of the question and no one had experienced any crime. For my own part, I walked the streets alone at night without any trouble.

Efforts are underway to boost the economy through tourism and there are a lot of attractions on offer. The world’s most impressive Mayan archaeological sites lie buried deep in the country’s northern and western subtropical jungles. Black-sand beaches on the Pacific coast are gaining a reputation among surfers, and the cheapest Spanish classes in Latin America attract keen students of all ages.

On the subject of language, the Spanish here is among the clearest and most pleasing to the ear I’ve come across anywhere. People greet each other with a polite chivalry that sounds like it’s straight from the pages of Don Quixote.

If you want to bask in unspoiled colonial romance and explore a rich and intact native culture, Guatemala should be on your shortlist. There are adventurous expats on both the Caribbean and Pacific coasts, and in other places around the country, but you’ll find most folks live in the old capital Antigua, an hour or so from Guatemala City, or tucked into communities on the shores of Lake Atitlan in the highlands. If you are interested in Guatemala as a part-time or full-time retreat, these are the two places to explore…