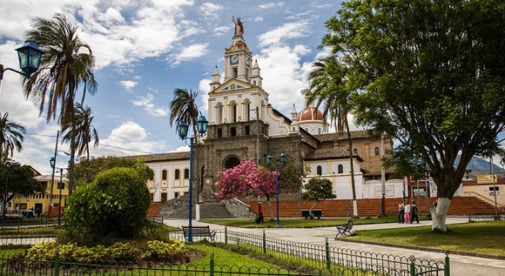 “We have horses, pigs, geese, dogs, and one chicken,” says Deb Swansburg. Caring for so many animals may not sound like a relaxing retirement to everyone, but for Deb it’s the perfect life.

Deb spent the last 20 years in New Mexico and she always dreamed of living on her own ranch. She just never expected that her dream would come to fruition near the little town of Cotacachi, Ecuador. But that is exactly where Deb, along with her husband David Meade, are spending their retirement today and they’re keeping busy by managing a small farm.

“We arrived in Ecuador a year ago,” Deb says. “And two-and-a-half months after arriving we stumbled into the good fortune to live on this farm.” For just $350 per month the couple rents a semi-furnished, two-bedroom home on nearly three acres of land. In exchange for the low rent they keep an eye on things and help manage the other two on-site residences when the landlord is unavailable. And they have permission to raise as many animals as they like while there.

Farming is not a part of their history as Deb was a public school teacher for many years and also a lawyer. Dave had a background in advertising and he also helped with Deb’s law practice. So much of what they are now doing is new to them. But in Ecuador they can afford to experiment and with help from the local friends they’re learning the ropes of farm life.

Ecuador was not originally in their long-term plan, but life doesn’t always go as expected. Deb was experiencing severe burnout while working within the U.S. education system. The economy in New Mexico, like much of the country, took a big hit beginning in 2008. And that carefree ranch life was looking like it would never happen.

“I was on Facebook one day and all of a sudden an ad popped on the side that said ‘Are you thinking about retiring? You could go to Ecuador.’ And I thought, no way. So I started researching with International Living, Wikipedia, blogs…I was spending one to two hours every single day researching Ecuador,” says Deb.

Through their research the couple found that they wouldn’t need to give up their retirement dreams, they only needed to adjust them a little. “I found that we could live really comfortably in Ecuador and I didn’t need to be under stress anymore,” Deb says.

In addition to their ever-growing list of animals, Dave oversaw the construction of a large greenhouse on the property where they live. Now, they grow tomatoes, lettuce, cabbage, broccoli, cucumbers, peppers, beans, onions, and even New Mexico chilies. “It produces way more than we can eat,” says Dave. “In fact, it produces way more than the three houses here can eat.”

With their farming dreams firmly under control, the couple takes time to explore whenever they can with day trips to the Intag Valley, Mindo, nearby hot springs, and a train tour is in the works. They’re also planning a multi-day trip to explore the southern part of the country in the near future.

Cotacachi is a great place to be according to Deb. “It’s got a great climate, affordability, and great beauty in the environment. It’s a nice change from 20 years spent in the desert.”