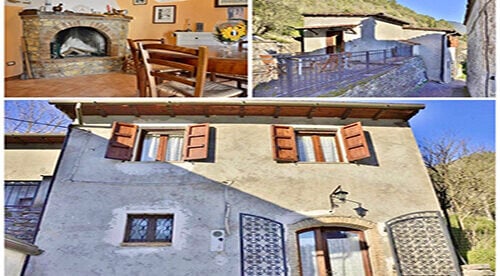 As I’ve been telling you over the past few days, this month is “Mission Italy” for my team.

On Friday, two of my scouts are catching a flight to Rome, before spreading out into the central Italian regions of Abruzzo, Umbria, Tuscany, and Emilia-Romagna, and then finishing in the Renaissance cities of Florence and Venice.

Their mission is to find overlooked properties in blue-chip cities…bargain historic boltholes in Italy’s stunning medieval hill towns…deep value rural villas and estates…and even some village homes for €1.

In preparation for the trip they’ve been sending me some promising real estate listings that might be worth further investigation once they’ve boots on the ground.

So, today, I want to give you a small glimpse of some of what they’ve found…

If you’re looking for a tranquil getaway in close proximity to a city, this bargain two-bedroom home in Umbria might be for you.

It’s situated in the Valnerina, a narrow and winding valley that takes its name from the river Nera. In the foothills of the Sibillini mountains, the area is dotted with small fortified hamlets and castles, and close to the city of Terni.

The house is just four minutes’ drive from the village of Arrone. The well-preserved medieval village is built as a fortress on a rocky hill rising above the bank of the Nera and is part of “I borghi più belli d’Italia” (Italy’s most beautiful villages) network.

Throughout the village you’ll find stone houses, old doorways, winding alleys, and ancient monuments, including the Church of Santa Maria Assunta, which dates back to the 4th century and even features paintings from Caravaggio’s school inside.

Again in Umbria, just outside the walled medieval village of Montone—in another of Italy’s “I borghi più belli d’Italia“—is this large, four-floor farmhouse listed at just €90,000 ($106,319).

The interior is in need of renovation, but what I like about these big homes is the potential to divide up the space. At over 3,350 square feet, you could easily accommodate an apartment for yourself and a separate unit to rent out.

You’re also just 40 minutes from Perugia, a grossly underappreciated hilltop city, with a prestigious university that dates from the 14th century, countless Etruscan and Roman monuments, and vibrant city atmosphere, packed with chic bars and restaurants in its historic center.

Increase your budget and you can find something very special.

In the region of Emilia-Romagna, close to the town of Brisighella, and surrounded by vineyards and tower-topped hills, is this large manor house with panoramic views. Indeed, the structure was originally a watch tower, built to observe the Lamone Valley.

For the best profit plays however, my recommendation is to focus your attention on the blue-chip cities—Rome, Florence, and Venice—where the right property can be both your part-time base and create income for you when you’re not using it.

In my report, Own a Profit-Making Home in Historic Italy, I lay out how the play works and where to look for deals that can bank gross yields as high as 15%.

Getting boots on the ground is critical. And that’s why my guys will be there come Friday.

Stay tuned for their reports in the coming weeks.

The World’s Best Places to Retire in 2021