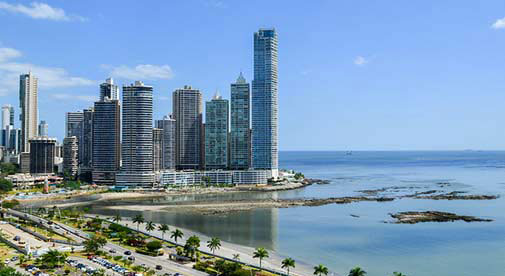 Panama City—a cosmopolitan capital on the Bay of Panama—has long stood as a testament to this region’s vast potential. Its gleaming skyline is composed of international banks, upscale hotels, and swank commercial and residential towers. Ethnic restaurants and supermarkets are filled with good things to eat from all over the world. Cars of every make and model zip along an impressive network of roads. For first-time visitors, the word that invariably comes to mind is “modern.”

Though so much of it looks shiny and new, this city is actually the grand dame of the Americas. On August 15, 2019, La ciudad de Panamá—the Pacific Coast’s oldest conquistador settlement—celebrated its 500th anniversary. (That makes it older than even St. Augustine, Florida, the first such settlement in the continental U.S., est. 1565.)*

The government—along with a long list of organizations—helped keep the big birthday celebration going all year long. A fund and a special office were also set up, with assistance from the United Nations Development Programme (UNDP) to help promote and pay for special events.

There were plenty of standout moments. The Union of Iberoamerican Capitals named Panama City the “Ibero-American Cultural Capital” of the year. And the 500th anniversary was the theme of the annual Panama Jazz Festival, held January 14-19. The festival’s main concert featured a special 500th anniversary composition, commissioned by then Panama City mayor José Blandón.

Soon after the jazzfest, over a quarter of a million people flooded here from all over the world for World Youth Day (WYD) activities that included a visit from the Catholic pope. Panama City residents opened up their homes to lodge young visitors from every country imaginable.

The local news showed us videos of excited kids arriving from everywhere: Austria, Argentina, Canada, Cambodia, Costa Rica, Cuba, Guatemala, Italy, Malawi, Mexico, Nicaragua, The Philippines, Poland, The U.S., Zambia…you name it. They sang, paraded with flags, and shared their cultures. It was probably the biggest, most international event ever held in this city, long known for its international diversity.

The eighth annual Panama IFF, the city’s much-lauded international film festival, was also specially themed. Held in April, the festival premiered an impressive line-up of films from Panama, other Latin American countries, and even from as far afield as Japan. The film Panama Radio, produced with the help of the special anniversary fund, took audiences back in time. In the film two women reminisce about working at a record shop in the 1960s, when the city became a hub for salsa artists.

In August the city’s annual international book fair followed suit, highlighting the city’s history with a talk on migration, refugees, and Afro-descendant diasporas. Other events included outdoor concerts, a city-wide scavenger hunt, a film exhibit called Imagining The City, a historical photo exhibit at the National Library, and so much more, from a festival of lights to a bike race.

There were also a host of special publications to commemorate the special birthday. The National Library released a new General History of Panama by Dr. Alfredo Castillero Calvo, a Fulbright Scholar and president of the Historians College of Panama. A new children’s book celebrates the achievements of Panamanian women, among them scientists, composers, politicians, authors, pilots, activists, doctors, athletes…80 women in all.

My favorite of the many wonderful things to come out of this anniversary has to be the mural project, “Mural 500.” That’s because it helped make this incredible city even more beautiful by matching artists with city sectors in need of a little love. You’ll see the results in upscale sectors like Bella Vista and San Francisco as well as historically low-income areas like Chorrillo and Santa Ana.

The great thing about the murals is that they truly represent the city… rich and poor, new and old…every aspect of it. Community councils met with artists to agree on themes and ensure the artwork was a reflection of their barrios. Featured artists include two of my favorites: Rolo de Sedas, known for his lovable, cartoonish depictions of Panamanian women, and Martanoemí Noriega, who captured the essence of Afro-Panamanian history in her Santa Ana murals.

You can visit https://ciudadpanama500.org/mural-500/ to see a list of the 26 participating artists and samples of their colorful paintings. (Choose ver más or “see more” for images of the artists at work.) Over the past year, I’ve been perked up by simply driving around Panama City—affectionately referred to as PTY by residents. Blank walls, columns under highways, and various buildings have been transformed from eye sores to eye-catching works of art.