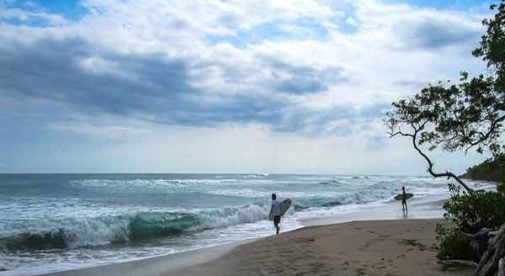 Playa Negra’s town (officially the pueblo of Los Pargos—but hardly anyone calls it that) on Costa Rica’s northwest Pacific coast is not typically on most people’s radar when they make plans to explore Costa Rica. It barely shows up as a dot on a map, and the journey along rutted dirt roads keeps away some of the less ambitious travelers—who often prefer paved routes leading to the more touristy destinations on the coast.

But for those who like the charm of a small, peaceful fishing village and some perfect surfing breaks, Playa Negra is an excellent pin to add to your map. Here the pace flows with nature—the hypnotic sounds of the ocean, the howler monkeys, and singing frogs. The beach itself, although called Negra (meaning black in Spanish), is not actually black. It’s more of deep brownish-tan with black volcanic streaks in it. 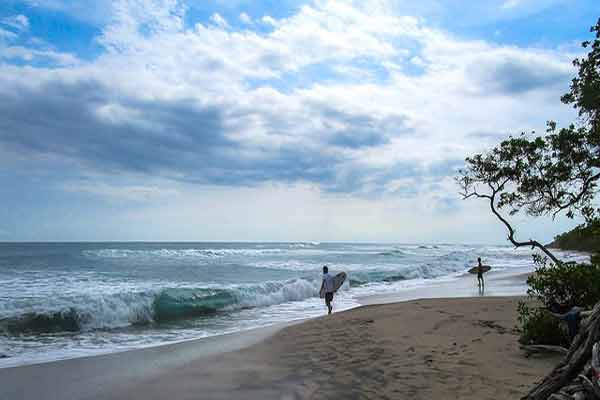 Surfers preparing to hit the water at Playa Negra.

Surfers know the main peak in Playa Negra is considered the best reef break in all of Costa Rica and has a fast, long right that gets quite hollow with plenty of chances to pull into the “green room” (consider that surfer-speak for near-perfect conditions). The beach has little development (a couple of beach hotels) and the water is wonderfully clean and clear. While surfing you can spot parrotfish, sea turtles, and colorful reef fish creating a one-with-nature experience. When the tide is low, tide pools form between sand and reef, making it perfect for swimming and lazing around.

At first glimpse, it appears as if nothing even exists in Negra besides a quiet surfer’s beach. However, there is a friendly expat community with folks from all over the world calling the Los Pargos neighborhood home—population well under 500. Houses hide behind trees and many residents get around the dirt roads on bikes, motorcycles, or horses.

If you crave a little taste of civilization, Negra has a few shops, a skate park, a few small grocery stores, a yoga studio, a mini spa, and even a couple of art galleries. If you are a foodie, Negra will not disappoint, with international cuisine abounding—from wood-fired pizza to Tex-Mex, Peruvian to French. A former owner of a 5-star U.S. restaurant, originally from France, owns Villa Deevena, serving elegant French-Asian Rim inspired dishes and an extensive wine list. There are also plenty of local Costa Rican restaurateurs who add fusion and flair to their cuisine, making eating in Negra a gastronomical adventure.

Local expats all agree they love Negra for the beaches, the lack of consumerism, the year-round consistent temperatures (ranging from the upper 70s F to the lower 90s F), and lack of rain compared to the southern zone and the Central Valley. Playa Negra is private and quiet, making it a truly safe community in which to raise a family or retire. It is also more affordable than the more developed towns along the coast.

With its close proximity to the bustling town of Tamarindo and the municipality city of Santa Cruz, Playa Negra offers the best of both worlds. Enjoying a peaceful beach life surrounded by nature, yet a short drive (45 minutes) to major shopping, clinics, and commerce, it is a place where you can wear your board shorts or your Sunday best and be treated the same.

Nine Great Things to do in Montezuma, Costa Rica

Should We Retire in Panama or Costa Rica?