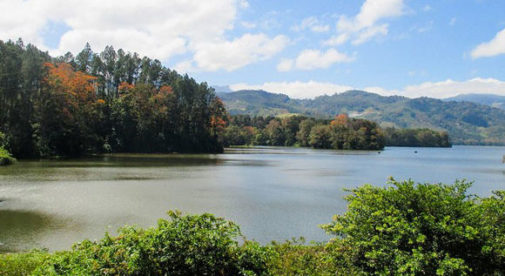 As I drive east out of San Jose and its suburbs, the gridlock, gleaming shopping malls, and dense urban development of Costa Rica’s capital slowly melt away. Within 30 minutes I’ve found myself in the countryside, following a winding road that hugs a mountainside as it descends into the valley below.

I’m in the Orosí Valley, and it’s an area unlike any I’ve visited in Costa Rica before, even other parts of the wider Central Valley.

The pace of life is slow. Heavily-laden farm trucks (vintage Toyota Land Cruisers are very common) groan up the steep roads. The valley floor and hillsides are covered in pasture and fields, and dotted with homes, some reached by precarious dirt tracks.

This is traditional Costa Rica. A real farming region, a breadbasket of the country with coffee, chayote (kind of like a squash), and other crops. This agricultural heritage goes back centuries. It’s an area steeped in history too. When the Spanish first colonized Costa Rica many of the settlers came to the Orosí Valley, where rich volcanic soil (from the nearby Irazu and Turrialba volcanoes) and abundant rainfall made for perfect growing conditions.

It remains like the frontier in many ways, at least compared to other more expat-oriented parts of Costa Rica. You get village life…where you greet people on the street with a hearty “Buenos Dias!” and you don’t just know your neighbors, you can count on them to lend a hand if you need it. You share the wealth when you have ripe avocadoes on your tree or your chickens lay eggs. Local shopkeepers welcome you warmly when you walk in the door. There’s even a twice weekly delivery of milk (although you can, of course, get it at the local supermarket if you prefer).

The slow pace, the small-town hospitality, the ideal growing conditions for hobby farms…it’s what has drawn the small number of expats who live in this area. There aren’t many. It’s mostly stayed under-the-radar, unknown and undiscovered by tourists except for mostly Europeans, who trek in the surrounding cloud forest. But that’s just the way foreign residents like it.

The pioneering expats who’ve taken up residence enjoy the Tico culture, the lower cost of living, and the ability to live a more rural existence. To that end, many of them live on farms, or at least out in the countryside, with views of the surrounding mountains and fields.

There aren’t many real estate agents active in this area, with not many listings found online. Boots-on-the-ground searching and networking is still key here. A two-bedroom home with mountain and lake views is available for $155,000. A country cabin with three bedrooms, on a third of an acre in a rural mountain area, is listed at $78,000.

There’s a lake too. The man-made Lake Cachi was one of the country’s first hydroelectric projects. But it’s a bucolic scene, with pine trees lining the shore. And lake-view restaurants offering a relaxing place to watch the water while enjoying a good meal—around $5 a plate for filling local fare like rice; beans; meat, chicken, or fish; and salad.

Another benefit of life in the Orosí Valley is that due to the high elevation, around 4,000 feet, the average temperatures are quite cool (it never gets above the low 80s F and hits the 60s F at night) and there can be some coldish days. So, although it seems strange to say this in tropical Costa Rica, if you plan to visit this area be sure to bring a sweater.