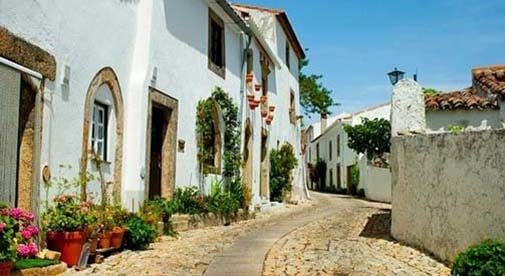 Marvão is one of Portugal's secret hill towns, where the air is pure, the food hearty, and the real estate often very cheap...

Kids are playing ball in a small court in the mighty fortress town of Marvão.

If they miskick, it’s a long way down to fetch it; they say this is the highest village in Portugal.

It’s a real eagle’s nest. You can see for miles across the country here, and into Spain too.

To get to Marvão you drive up a winding road past olive groves and through an amazing beech forest. Then you ditch the car and walk through imposing medieval gates to get lost amid the winding cobblestone lanes and whitewashed houses.

It’s a stunningly preserved place, and, unlike a lot of hill towns in Europe, it feels really well-maintained and lived in…there are small gardens, a little park and playground…

There are plenty of Portuguese day-trippers and a few French and Spanish tourists, but I haven’t seen any English-speaking foreigners anywhere around. It feels very “undiscovered.”

I came to Marvão on a whim and a hunch. I looked at the map and saw some mountains. Then I got in the rental car. It’s less than three hours from Lisbon…just a four-hour drive from Lagos, in Portugal’s Western Algarve where I started from…

But, I came the long way, stopping in medieval towns, amid meadows, and exploring real estate all over rural Portugal…I recommend you do the same, take a few days and savor a road trip.

Portugal is a pleasure to drive in with excellent highways and courteous drivers.

On a granite crag on the Spanish border, Marvão is the highest village in Portugal.

The mighty battlements are from the great age of chivalry when armor-clad Templar knights defended these borderlands. But it is a much older place, once a stronghold of the Lusitanians before the Romans conquered them. Hannibal’s Carthaginians plundered their way through here…in fact, in the valley beneath Marvão is an entire Roman city which you can explore on foot. It’s called Ammaia.

And Marvão is just one of the attractive hill towns dotted along the Portuguese border with Spain. At the heart of the Serra de São Mamede National Park, you are surrounded by walking trails through pine and beech forests. Olive groves are everywhere. It’s a part of the world perfect for escaping and relaxing.

I came across a very interesting property—a four-bedroom house of 2,153-square-feet inside the town’s thick medieval walls. It’s white-washed and shady inside, to protect from the Alentejo summer heat, and a red rose climbs around the entrance. There’s a backyard and a terrace, and it’s all yours for a mere €100,000 ($110,636).

Or, for €90,000 ($99,602) you can own a villa with just under four acres, close to town. There’s a vegetable garden and fruit trees, also cork and olive trees, two fresh-water springs, and public water is connected to the land.

It gets hot here in the summer and water is all-important if you want to get your hands in the soil and have a hobby farm. That thought certainly excites me…you’ll find olive trees around here that are thousands of years old…the local wine is exceptional and you could find a small vineyard to try your hand at wine-making.

Where things get interesting is with what my boss Ronan McMahon calls “the miracle of leverage.”

Your monthly repayments are just €364.

Put it another way, for a mere $403, you own a historic homestead in a stunning mountain national park in one of the world’s friendliest, easiest, and safest countries.

And there are lots of opportunities around here like this…

Castelo de Vide is a much bigger town than Marvão, about a 20-minute drive away.

It’s got more going on, stores, cafés, restaurants…and similarly awesome mountain views. Around here I came across houses in need of renovation for as little as €10,000 ($11,068).

Castelo de Vide has a castle, like all these fortress towns on the border.

Among the white-washed houses of the old citadel I stopped to drink from a fountain. Flowers spilled from baskets and I could spy secret gardens through wrought-iron gates.

One of the most appealing in-town homes I came across was a three-bedroom, with a garden, in good condition, for €95,000. It’s close to the castle and comes with parking—which could be handy when renting as most tourists who make it here drive. I’d be tempted by the idea of buying here if I could get the bank to pay the lion’s share at those low rates of 1%.

Then I could rent short-term when I wasn’t using it. From what I’ve seen, rental rates are low, but this place feels like a secret waiting to be discovered. Of course, it might never be, but I could easily spend a lot of time here. Plus, the cost of living is incredibly low.

Tourism in this region is fairly undeveloped. Yet tourism is on a tear in other parts of Portugal. Numbers have risen for eight years… Feels like there could be “a pocket money play.” Perhaps, with the right marketing, a short-term rental could be made to work.

If I were going that route, top of my list is a historic three-bedroom house just inside the walls of the castle itself in Castelo de Vide. From a cursory inspection it seems in good condition. (I’m not interested in taking on a lot of renovation work.) It has some lovely traditional features like wooden ceilings. The asking price is €120,000 ($132,763). I would use the location of the house as a selling point…like I say, it’s right inside the castle wall.

If you’re budget is bigger and you are interested in applying for Portugal’s Golden Visa, then…

For €500,000 you can own something spectacular, a country estate with a swimming pool…completely modernized house, and land with your own olives, orchards, and outbuildings…

And these mountains, the Serra de São Mamede, feel like the perfect “get away from it all” escape. You are smack bang in a national park…surrounded by natural beauty.

There are various ways to be eligible for the Golden Visa. Investing in real estate is the main one.

I looked, and you can buy a large, five-bedroom estate house with a swimming pool and a 74-acre farm for €560,000. It’s already divided into seven apartments with a license to operate as a hotel.

Of course, you can own for less than that and, as the Golden Visa allows you to purchase more than one property, you could own your farm in the hills and a beach condo somewhere else in Portugal. For €230,000 I found a three-bedroom farmhouse with a pool and over an acre of fruit trees and olives. It’s got a guest studio that currently rents on Airbnb for €70 a night and has good reviews. Plus, you’re just a short walk up the hill to the center of Castelo de Vide.

They say if you drink from the Mealhada fountain in the town you’re destined to return to Castelo de Vide and get married there. Whatever about getting married, I’m definitely going back.