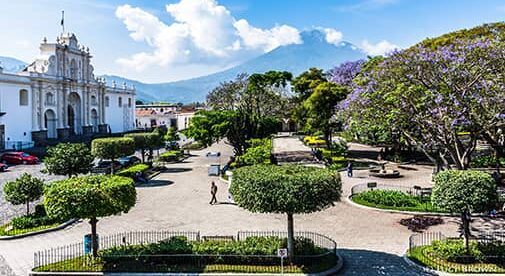 Guatemala is often overshadowed by Mexico its expansive neighbor to the north. However, it could be an alternative for adventurous spirits looking for rich experiences and a slower pace of life with fewer restrictions in a not so faraway land.

Home to the highest mountain and the deepest lake in Central America, it’s a small country full of vibrant colors, contrasts, and stunning natural beauty. The people, culture, traditional costumes, languages (although Spanish is the official language), celebrations, cuisine, and history of Guatemala are as diverse as the landscapes.

Once you fall in love with “The Land of Eternal Spring” it’s hard to let it go, so, as a long-term expat, here are my top 5 reasons to consider Guatemala.

Another draw for folks looking to make Guatemala their part-time or full-time home is the proximity to the U.S. and the availability of direct flights from Guatemala City.

Guatemala observes Central Standard Time (CST) all year with no Daylight-Saving Time clock changes. Currently, (although depending on the U.S. Daylight-Saving Time) Dallas is in the same time zone while Miami has one hour and Los Angeles has a two-hour time difference. Flights from Guatemala City to Miami are just over two hours, Dallas about three and a half hours, and Los Angeles just over five hours.

This convenience and ease of travel have resulted in a large American expat community in the country. No long-haul flights are needed and no jet lag at the other end so many American expats make frequent, easy trips (pre-pandemic) back home.

Also, as there’s very little time difference it’s easy to keep in contact with family, as well as work remotely or run a business that requires frequent communication with the U.S. during working hours.

2. The Land of Eternal Spring

Guatemala has been nicknamed “The Land of Eternal Spring” for its clement year-round temperatures in much of the country at a higher elevation. It’s a big reason many expats have chosen to make it their home to escape the long, dark, cold winters up north and overseas.

Due to the proximity to the equator, daylight hours range between approximately 11 and a half to 13 hours. Sunrise fluctuates between about 5.30 a.m. to 6.30 a.m. and sunset between 5.30 p.m. to 6.30 p.m. There’s very little change throughout the year, so there are no short days but there aren’t any long summer evenings either.

The capital Guatemala City as well as two popular expat hubs, the UNESCO World Heritage Site of Antigua in the Central Highlands and the majestic Lake Atitlan in the Western Highlands, lie at just over 5,000 feet. In these areas, average annual daytime temperatures are around 60 F to 75 F. March through early June are the warmer months. December through early March, although warm during the day, can have cooler spells with early morning temperatures sometimes dipping to a chilly 50 F. The rainy season runs May through October while the rest of the year stays mostly dry.

However, if spring-like temperatures don’t entice then the lowland and coastal areas have a hotter more humid, tropical climate. Average annual temperatures are around 80 F soaring to about 100 F during March and April.

Although compared to Southeast Asia, Guatemala isn’t cheap, it’s definitely affordable and the cost of living is relatively inexpensive compared to the U.S. Imported goods are pricier, but you can live comfortably buying local products and fresh in-season produce from the mercado.

Rent varies widely depending on location, quality, and facilities. I’ve just seen a basic one-bedroom furnished apartment near the center of Antigua renting for about $425 per month not including utilities. However, $600 upwards will get you something much nicer especially on the outskirts or in nearby villages.

A steak tartare in a French bistro costs about $18.60 and a glass of wine upwards of around $5.80. However, a budget menu del dia lunch at a basic comedor is about $2 in the market or $3 at a nicer eatery. A local beer or a cup of quality locally grown coffee cost less than $2 each.

A private taxi from Antigua to the airport in Guatemala City (about a one-hour drive depending on traffic) is about $28 although many opt for the cheaper $19 Uber or a shared minivan between $10 to $15.

One of the biggest reasons many expats relocate to Guatemala is the people. After a visit there many, including myself, feel so welcome that they decide to make their stay more permanent. Now, some of my closest lifelong friends are Guatemaltecos as well as expats living in Guatemala.

The warm, friendly Guatemaltecos, nicknamed Chapines, are a mix of indigenous people and European descendants of mainly Spanish origin. This makes for a diverse, colorful, and vibrant culture with a constant flurry of activities, events, traditions, and celebrations.

Intricately handwoven textiles are an important part of Guatemalan Maya culture. People, mainly women but depending on the area, from each indigenous community can be identified by their unique traditional handwoven costume. Worn as daily attire, the streets and markets are like a living museum of color and design.

The expat community is also very welcoming and diverse. Many adventurous folks from all backgrounds relocate from the U.S. and Canada as well as Europe and elsewhere. Expect to have an eclectic mix of friends with friendship groups of international expats intermingled with Guatemaltecos. There’s always something to do and someone to practice your Spanish with, learn about local traditions, and enrich your life in a new land.

Guatemala is famous for its natural beauty and ruins. It has the highest mountain (Volcán Tajumulco at 13,786 feet) and the deepest lake (Lake Atitlán believed to have a maximum depth of about 1,120 feet) in Central America.

I’m obviously not the only one smitten by Guatemala’s charm, warmth, and beauty judging from the number of expats who’ve decided to make The Land of Eternal Spring their part-time dalliance or forever home.

Guatemala Beaches: In Search of Better Beaches on Guatemala’s Trio of Lakes