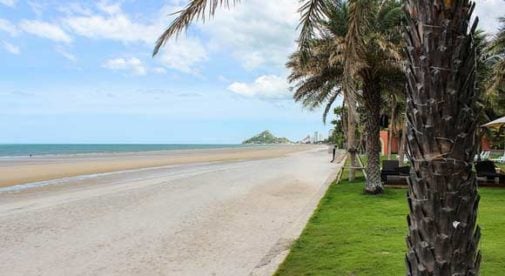 It’s difficult to beat the beauty of Thailand’s white-sand beaches, often with a backdrop of jungle-topped mountains in the distance. Living on, or near, the expansive coast of this tropical paradise could be your dream retirement. Although more expensive than living in less well-traveled areas, the cost of living can still be surprisingly inexpensive for a life of year-round warm weather and spectacular scenery.

Phuket has been the go-to island for several generations of adventurous tourists. Today you will find a large number of expats calling it home. This “Pearl of the Andaman” is surrounded by clear, warm waters and there is a constant gentle breeze. The average year-round temperature is in the low 80s with small increases or decreases in summer and winter respectively.

Thailand’s largest island provides a variety of lifestyles, from the club-hopping, action-filled nights in Patong to the easygoing lifestyle of less well-known areas of the island. And with Phuket hosting the second-busiest airport in the country, you are always within easy range of many local and international destinations, often without passing through Bangkok.

Phuket’s expats are spread from one end of the island to the other. Whatever your budget, there’s something for everybody. Small studio condos with amazing seaviews can be rented near Bangtao Beach in Laguna for as little as $500 per month. More spacious one- and two-bedroom apartments that are still only minutes from white sandy beaches will more likely be at least $800 per month. Like most parts of the country, you are likely to find good deals by putting the word out to the local residents once you have arrived.

Mix With Royalty in Hua Hin 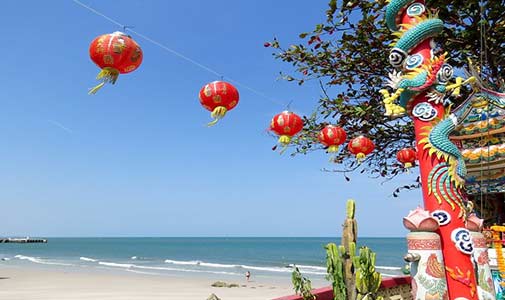 For a quieter, more relaxed environment where the nightlife and other forms of entertainment are more genteel, the smaller seaside city of Hua Hin is the place to settle. Historically a holiday resort town for local Thais escaping the heat and congestion of Bangkok, this small city of 50,000 people is becoming more popular with expats.

The five-mile long sandy beach is lined with restaurants and shops. At last count, the city had nine golf courses nearby, with green fees ranging from $60 to $100. Add in the popular weekend Cicada Market with its outdoor food court, huge art market, and live music performances and you have a recipe for a great lifestyle. And with the King and Queen more or less permanent residents, Hua Hin is an extremely safe place to live with the additional security provided by the Royal Police.

Beachfront rentals in town are similar to those elsewhere in Thailand. You will pay $500 per month for a studio condo and few hundred more for a one- or two-bedroom home within a short walk to the beach. However, move back away from the water a bit or a few miles north or south and the prices will drop. It is still possible to find three-bedroom houses for under $700 per month. For more Thai style homes, you can pay $500 or less.

Koh Samui (Samui Island) is Thailand’s second largest island and has attracted both budget travelers and wealthier holidaymakers for years. Now it is just as common to find expats living on the island for several months a year and full-time.

From simple bungalows on the beach to exquisite villas nestled into the hillsides overlooking the ocean below, Samui offers a wide variety of lifestyles. Most rental prices are on a par with Phuket but it is still possible to find lower budget long-term properties by cruising the island and searching for rental signs. Talking to locals often leads you to incredible deals.

Chaweng Beach is the overdeveloped, wild and crazy part of the island with its busy and endless strip of international restaurants, noisy bars, and countless tourist shops. But head northeast to Bhoput and its timeless Fisherman’s Village and life seems to slow down a bit. A few miles further west in the small village of Maenam, you can still find affordable rental homes only a 10-minute walk from quiet and uncrowded Maenam Beach.

Samui is a small island and only takes an hour or two to drive around, but it’s dotted with a dozen or so picturesque beaches. Healthcare on the island meets international standards and you are rarely more than a half-hour drive from either of the two modern hospitals. English cinemas, Western supermarkets, great international restaurants, and seaside pubs ensure that you will never be missing anything from home.

If you are looking for a relatively inexpensive lifestyle on a tropical beach, Thailand may be calling your name.