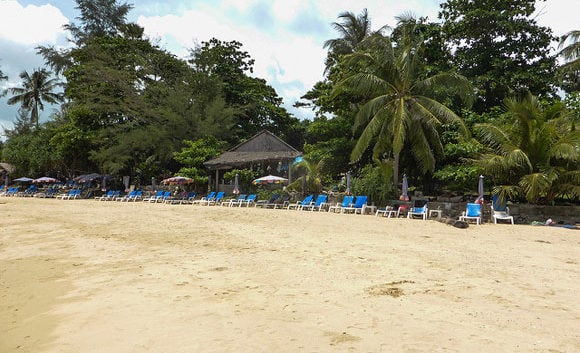 Life in Phuket, Thailand can be pretty easy. Overall, it’s a well-trodden island that has been welcoming tourists for decades. But that doesn’t mean you can’t find a quiet little slice of paradise to call your own. Phuket has all of the infrastructure needed to make moving there an easy transition.

It’s Thailand’s largest island, with a population of almost 600,000, with 115,000 expats from around the globe having made it their home. It is in the clear waters of the Andaman Sea and only a one-and-a-half-hour flight from Bangkok, if you are itching for a weekend in the big city. Since Phuket has an international airport, traveling to any of the nearby countries is a breeze. There are even a few direct flights to far-flung places like Germany and Australia.

It’s easy to drive around the island, with 220 square miles to explore. From tip to tip it’s around 30 miles in length and 13 miles wide, making day trips around the island easy. Turn off the main road and you might find yourself in a small cove with a near-empty beach. On the other hand, pick one of the more popular beaches, and you’ll find yourself having cocktails and making new friends. It’s the kind of island that is big enough to explore and get off the beaten path, while living in an area with all the major amenities you need.

A couple can live well on $2,800 a month pretty much anywhere on Phuket, although it’s easy to spend more if you only shop at the international grocery stores and buy imported goods. Shop at the daily farmers’ markets and you’ll save money by buying local produce and the freshest ingredients. You’ll likely have to shop at the grocery stores to get your imported cheeses and Serrano ham, but for daily life, the local markets are the best.

The low cost of living on the island allows for the added bonuses that aren’t so affordable in the U.S. A full-time helper who will clean and cook costs $350 a month, or if you just need someone hourly, it costs $4.75. A general doctor’s visit is usually under $10, and a dental cleaning is $12, which leaves plenty of money for a traditional Thai massage ($8), where they bend you into a pretzel.

Of course, there is more to do here that just go to the stunning beaches. There are modern movie theaters showing the latest blockbusters for $3.50, and massive cosmopolitan malls with big brand names as well as local boutiques. Or if wildlife is more your thing, the Gibbon Rehabilitation Project is where you can visit and even volunteer your time to work with the little furry primates. Take a stroll through any number of the national parks on the island and see spectacular waterfalls or turtles being hatched. There are also over 10 golf courses, ranging from the award winning, to the beachfront courses, to those suitable for every level of golfer.

For any health issues, you won’t have to leave the island; Bangkok Hospital is a network of internationally recognized, JCI accredited hospitals, and there is a branch in Phuket Town. Many of the doctors speak English so communicating won’t be a problem.

One of the many benefits of moving to Phuket is that while it’s tropical and exotic, it’s an easy life. There is a reason why expats have been moving there for decades; there’s no serious culture shock and all the amenities you might need for modern living are at your doorstep. It is a dream lifestyle, on a beautiful island, at affordable prices.

Ask the expats on Phuket and they will tell you…despite a few complaints about expensive taxis, overdevelopment, and the monsoon weather…Phuket is the best place for expats to live, in the best country for expats to live. Many even say that retiring in Thailand is the best decision they have ever made. And as you look out over the sparkling, turquoise waters of the Andaman Sea, from any point on Phuket’s picturesque coastline, it is difficult to argue with them.

Thailand’s largest island is still considered paradise by expats and tourists alike. With jungle-topped mountains and white-sand beaches surrounded by warm and clear waters, it has been aptly named the “Pearl of the Andaman”. While it is not unusual for temperatures to reach the 90s F, the ever-present breeze tends to keep the averages closer to 80 F.

Phuket offers an easygoing lifestyle, or a club-hopping, center-of-the-action one, depending on your preference. For instance, you can go for a swim and a relaxing lunch on quiet Naithon Beach, or you can join the buzz in the bar-lined Patong area, where music throbs and cabaret shows continue into the night. And with Thailand’s second-busiest international airport, you can easily catch a flight to a range of destinations, without transiting through Bangkok.

As in other locations around the country, expats are drawn to the comfortable, convenient lifestyle. A wide range of restaurants serve a huge selection of Western and Asian food. Phuket is especially famous for having some of the best seafood in the country at very affordable prices. There are few amenities that are lacking. Imported foods, great shopping, spectacular golf courses, sailing…it’s all here. And top-notch medical care is available at a fraction of the cost of back home.

With a little homework, you can still find deals in some of the more popular beach areas, such as Patong and Kata. Certainly, it is easier to find a more affordable lifestyle on some of the other parts of the island. Phuket Town and Thalang are two areas recommended to those on a strict budget and who want a more authentic, less tourist-driven living experience.

Talk to Locals for the Best Deals

There is not really a close-knit group of foreigners on the island; expats are spread from one end of Phuket to the other. But whatever your budget, there’s something for everybody. Although small studios with amazing sea views can be found for as little as $500 per month, you will probably pay more than $800 for a larger living space. As in other parts of Thailand, you are likely to find good deals by putting the word out to the local residents once you have arrived. Sometimes the best solution is to explore the area by foot or vehicle and look for private rental signs.

Bob Barnett moved to Rawai on the southeast coast of Phuket a couple of years ago. Phuket City is only a short distance to the north, and easily accessible by car or scooter. He pays about $600 per month for a Thai shophouse. He operates a small internet café and car rental business on the ground floor and lives in the apartment upstairs. Nai Han beach, one of the best beaches on Phuket, is only a few minutes’ drive away.

Bob figures you can still live on Phuket for $1,500 to $2,000 per month. “As always, it depends how you live. If you eat like a local and drive a scooter rather than a car, you can still live very cheaply. On the whole, everything can be affordable. A lot of the retired people here live in relatively inexpensive apartments,” Bob says.