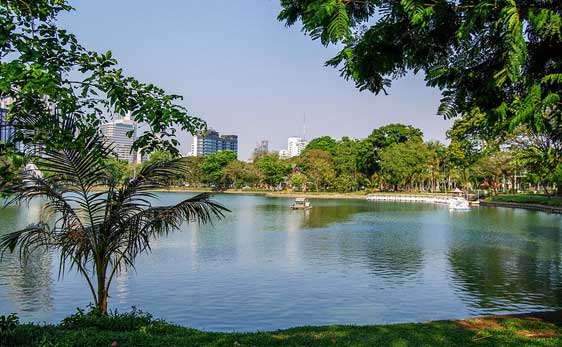 An Insider’s Guide to Bangkok, Thailand

Bangkok” is in fact a nickname. Something like “Philly,” “L.A.”, or “Jersey.” A complex city of contrasts, the Thai capital’s true name reflects its multi-faceted nature: Krung Thep Mahanakhon Amon Rattanakosin. Well, that’s the shortened version. The full ceremonial title has another 15 words.

The city’s modern, luxury buildings loom over maze-like markets that seem little changed in hundreds of years. It’s a foodie favorite not only for its outstanding local cuisine but also for the selection of international fare now found in cafés and bistros all over the city. Known for decades as a backpacker hub, where cut-price flea-pit hostels played host to an international crowd of sunburned gap year students, Bangkok today has luxury and boutique hotels to rival any city in the world.

The last time any meaningful records could be kept (i.e., before COVID), it was the world’s most-visited city. Most of those visitors follow an enjoyable, if predictable, route, visiting the Grand Palace, various Buddhist monasteries, and flopping, happily exhausted, into the welcome cushions of a street-side cocktail bar on the ever-colorful Khao San Road. That’s a good starter, but the city has far more to offer those who dig a little deeper.

My perfect weekend would start early Saturday morning, waking up in a nice riverside hotel for a swim in a pool with a view out on the Chao Praya River. Of all the cities in the world, Bangkok might have the best value for money hotels. If there is a place to splurge a little, it’s here. My choice is the Praya Palazzo for its colonial-era feel. Moderately priced among much more expensive options, the place is lush in vegetation and style.

First stop, a couple hours of wakeboarding at one of Bangkok’s four cable wake parks. Bangkok may be the best cable boarding destination in the world. The premise of cable boarding is that, instead of being towed by a boat, boardriders are pulled along by cables attached to an overhead gantry, a little like a tow-along ski lift. Each of the parks has its own high points, but in general all are priced far below the international standard and offer cafés and comfortable seating areas. Zanook Wake Park is the most central, in the southwest of the city. It’s about a mile from the Rang Pho Skytrain station, and you can pick up a cab or motorcycle taxi for the last stretch.

Heading back into the city, traffic will be tied up, so avoid it by heading to a canal boat stop just up the Bang Bon road. Bangkok was once known as the Venice of Asia for its extensive network of canals. For years the boats were looked down upon, but are starting to come back into their own as both younger commuters and tourists alike realize they are the cheapest, fastest, most convenient way to get around. Better again, is that they wind through lesser-known districts and parts of old Bangkok that aren’t on any tour.

It seems like it’s always time to eat in Thailand.

My choice of hitting the mall for lunch might make tourists gasp, but bear with me. One of the upsides of Bangkok’s many spectacular malls are their food courts. The best of them is Food Loft at the Central Chidlom mall (across from Chit Lom station), which blends a wide selection of choices with strict standards of quality. I might choose a classic Thai lunch of grilled chicken (gai yang) or catfish (pla praduk tod) with papaya salad (som tom) and sticky rice (kao neo). On the street, this might run you about $3. Here, it’s about twice that, but I prefer the indoor approach.

From the glass and steel city center, take a step back in time to head up the Chao Praya river to Koh Krit—an island originally inhabited by the Mon people and known for its ceramics and traditional sweets. Koh Krit is a laidback refuge from the modern crush of the city. Rent a bike to cruise along the motor-free roads and sample traditional desserts like kanom ban bin (coconut cakes) and kay saya fug tong (pumpkin custard) sold from bamboo shopfronts for around $1 a portion.

As the sun begins to set, wander over to Chitbeer on the east side of the island. It’s a tiny craft beer bar built in the home of one of Bangkok’s leading craft brewing advocates. Visitors can choose from a list of home-made beer perfected by the proprietor, who wears many hats (including being a colonel in the Thai army).

It’s time to eat again, and my choice is a dinner cruise. Dinner cruises were once the stuff of package tours and drunken wedding parties, but there are now a number of specialty offerings, from haute cuisine for big bucks to burgers and booze cruises. Either way, they all present magnificent views of this megacity lit up in the night like a sparkling jewel.

The perfect first day ends with a drink at a rooftop bar. Many top-end hotels have them. At 83 floors high, Baiyoke Sky Bar is probably the city’s best known. Or try the sky bar at Labua, made famous by the Hangover movie series. Either way, the views are as spectacular as from the river, but with the benefit of a bird’s eye perspective you get a feel of how immense Bangkok truly is.

Day two starts early for a two-hour massage at the birthplace and original school of Thai Massage: Wat Pho. As the resting place of the country’s largest reclining Buddha, the temple complex gets crowded and broiling hot, so the earlier you go, the better. Thai massage is not a gentle rubbing but a more vigorous exercise that combines acupressure and stretching. It can be slightly painful for the uninitiated, just be sure to communicate with your practitioner.

After a good kneading and stretching, and while it’s still cool enough, walk over to the river for another canal boat ride, this time to the Jim Thompson house. This landmarked “house on the canal,” as it was known by friends in Thompson’s lifetime, is the best place to see art in the city.

Thompson became famous for his Thai silk company, but his house is an expression of his love of traditional architecture. Melding four houses from different parts of the country, Thompson created a walkthrough study of space and angles in hardwood. He filled it with magnificent pieces of sculpture and painting from around Southeast Asia, paired with furniture and fittings from Europe.

Time for some lunch, and if Pad Thai sounds good, then there is only one place to eat it. Thipsami has the reputation of being the original Pad Thai, serving it since just after World War II. Noodles are fried in shrimp oil with a variety of ingredients, from deep sea prawns to mango slices, and then wrapped in a light omelet. For lunch it’s possible to get in, eat, and leave in less than an hour. In the evening, lines stretch around the block for both seating and take out alike.

Not too far off by taxi is Chatuchak weekend market—a huge rambling market heading towards the outskirts of the city, where sellers offer everything from exotic animals to cheap food. You can have a suit tailored, get a haircut, and buy an antique car all in one place. I’m not much of a shopper but I am a sucker for antique furniture and the like, so I roam the fringes where dealers put out junk car parts, old tools, and sometimes colonial-era teak chairs cheek by jowl. It’s hot, crowded, loud, and haggling is definitely required.

It’ll be about the height of the day’s heat by now and there is no better place to shelter from the late afternoon doldrums than a movie theater. I like to go to the Scala when I can. This old deco-style theater, that can hold a 1,000, was built in 1969, based on the Teatro alla Scala, Milan’s opera house. The theater normally plays independent and international films, and is right in the heart of Chinatown. Entry is about $5.

It seems like it’s always time to eat in Thailand, maybe because there is hot food on sale everywhere. As night comes on after the movie, head for Art Box, where artisans and craftspeople sell handmade goods alongside food trucks offering dishes from all over the world in a large empty space right off of Sukhumvit Road. After making the rounds to order food, stop at the craft beer booth to order a frosty one of Thailand’s many independent brews before taking a table (150 baht—about $4.60). Three different bands play throughout the evening and it’s a great place to be outside listening to live music, feasting on a variety of foods.

Last stop before lights out, Adhere the 13th Blues Bar is just across the canal from the Khao San area, almost subterranean in Samsen 2 alley. The place gets stifling and usually the crowd spills out onto the sidewalks, but the drinks are cheap and the music is genuine. It closes at midnight, so make your way back to the hotel before your tuk tuk turns back into a pumpkin. I expect you’ll sleep well.

This itinerary ignores travel time for the most part. Bangkok is not a walking city; it’s too hot and sidewalks are all but useless. Canal and river boats are a great option and very cheap (about a dollar per trip). The same is true for the underground and the Skytrain.

I do believe every visitor should experience a tuk tuk but taxis are almost the same price, more comfortable, and safer. If time is of the essence take a mototaxi to get through traffic, but maybe close your eyes—they’re slightly terrifying.

Hotels can be had all over Bangkok for less than $50 a night (New Siam Riverside near Khao San Road is pleasant) but you can still get a decent guest house room for about $10 (River View Residence in Samphanthatwong, for example). I know there is a world of opinion about how great Thai street food is, but the truth is, mostly it isn’t. Mall food courts, though, have all the cuisine, without risking food poisoning.

Bangkok is a very safe city, but use common sense no matter how much someone smiles. If an offer sounds too good to be true, it is.