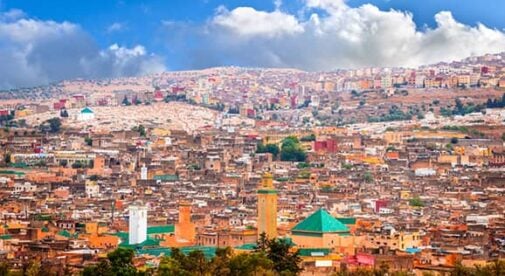 Sometimes you end up finding paradise in the unlikeliest of places.

That’s what happened to Karl Mangialardi, my recently recruited guide, while he was attending a trade show in Casablanca, Morocco almost eight years ago. Now a semi-retired stone and marble importer and exporter, Karl—known as the “Stone Hunter”—spent decades exploring the world, bouncing between continents to tour quarries and cultivate business clients. He never expected to find his utopia in this north African kingdom.

“This country just captured my heart and soul,” he said. “It wasn’t even my choice…Morocco picked me.”

A native of Pennsylvania, Karl became disillusioned by the political and social divide happening back in the U.S. He had grown frustrated by the endless red tape and bureaucratic hurdles of doing business there, and equally tired of submitting half of his hard-earned income to the taxman. He’d been craving a change and a more fulfilling life.

He found it, first in the seaport city of Casablanca, and later, Fez.

As a caveat, Karl’s a special breed of expat, identifying as more of an “import.” Although he promised to show us a side of Morocco much different than what we had seen so far—one with amenities more appealing to Western retirees—he preferred the elements that Beverley and I found…well, a bit challenging.

Resembling a slightly taller, pony-tailed Danny DeVito, with black-rimmed glasses, and the same style of cutting humor as his doppelganger, Karl was perfect for the assignment.

Taking Karl’s advice, Beverley and I shuffled from our modest room at the “dar”, in the old quarter of Fez el Bali, to the upscale Palais Medina hotel, located in the much more modern and urbanized Ville Nouvelle section of the city, founded during the French colonial era. For those seeking a more Western atmosphere, this area is much more conducive. The contrast between the ancient Medina, which seemed voluntarily frozen in medieval times, and the “New City” was stark.

The Palais Medina, marking the border between these two distinct zones, was a 5-star hotel that, despite lacking the Andalusian charms of the old town’s “dars”, provided the same luxuries of similar North American or European hotels. Our balcony overlooked the ancient Medina and Kasbah, backed beautifully by the majestic hillsides. The “calls to prayer” that echoed across the town five times per day added an enchanting “Lawrence of Arabia” flair to the almost surreal atmosphere.

Eager to explore Fez’s newfound modernity, Beverley and I hit the Borj Fez, a two-level modern mall packed with 120 stores, and about as many indoor palm trees, located right next to the hotel. Its food court had such familiar names as Pizza Hut, Burger King, and Dominos (not that we had a desire to eat there, but the familiarity was comforting!)—as well as retail stores selling familiar brands of clothing and shoes. The mall offers free Wi-Fi, and there’s a Moroccan version of Starbucks, Coffee Place, with tasty, frothy lattes for $2.30. Unlike the pestering vendors at the souk stalls, we were able to relax and shop around completely hassle-free.

Most surprising of all, we found a well-stocked liquor store (rivaling any in North America), adjacent to the mega-sized Carrefour supermarket. Although it has a separate entrance (and it’s forbidden to take liquor into the adjacent store), the busy outlet is run by the same grocery chain, and sells a wide selection of beer, wine, and spirits.  (We later discovered that, contrary to long-standing myths, booze is sold at similar venues across the country, including independently run “beverage” stores.)

The mall also featured a women’s lingerie store, sporting mannequins and advertising posters in the window. While we were a bit surprised at first, Beverley and I took note that many women were wearing skirts, spandex pants, and tight, ripped jeans around the mall. Young couples didn’t appear very restrained either, as many engaged in public displays of affection, oblivious to security guards and others around them. Another stereotype shattered.

As Karl would later explain to us, “things are changing, especially for the younger generations.”

We first met Karl in front of the Zanzibar Café, leaning against an elm tree next to the tiled outdoor patio crowded with tables at this ages-old corner coffee shop in the busy commercial district of the New City. He was anxious to rush us away to experience some authentic Moroccan street food, right around the corner.

The deep-fried potato balls, known as maakoudas, were served up by the curbside vendor piping hot, fresh from the pot. Beverley and I dipped them into “harissa,” a spicy, smoky chili sauce flavored with garlic, olive oil, and citrus juices, creating a crispy-on-the-outside, tender-and-juicy-on-the-inside, blissful foodie experience. At only five cents each, we barely mustered enough willpower to leave.

Walking the streets of New City, we were surrounded by tall, modern buildings, featuring new developments built of glass. The infrastructure was also contemporary, with clean, well-manicured green spaces blending seamlessly with freshly painted roads. Cascading fountains and towering palm trees decorated the centers of many roundabouts, surrounded by trendy cafes and alfresco restaurants. It felt like we were in South Beach—without the traffic….and pretension!

We soon arrived at the Tivoli Bar, one of Fez’s oldest traditional Moroccan-style tapas bars, serving locals—and adventurous expats—since sometime around the 1950s. Nobody seems to know exactly. After being greeted with welcoming smiles and high-fives by many of its staff and patrons, Karl escorted us to a dimly lit room at the back of the building. Several small, paper-covered tables, surrounded by wooden stools, crowded the tiny area—all facing an empty, ramshackle stage. With its red brick walls, brown pillars, and earth-tone décor, the room had a comfortable vibe, despite escaping updates for the past 50 or so years.

Karl advised us to be patient for the live music, as we ordered a round of drinks. Stubby bottles of Stork Pale Lager Beer, reminiscent of my youthful days—cost 50 cents apiece—including a plateful of freshly broiled, seasoned fish with each serving!

We finished off the first few bottles before a thin, elderly man wearing a long, loose-fitting robe, patterned with multi-colored vertical stripes running its full length (called a djellaba) climbed onto the stage clutching a wooden oud—a small, short-necked stringed Arabian instrument. Karl introduced him as Mohamed, a traditional Gnawa musician who performed there regularly. As Mohamed took a seat, the table chatter abated, and everyone focused their attention on the stage.

His music had an almost hypnotic effect as Mohamed chanted, strumming low-toned, rhythmic melodies on his oud, complemented by bouts of muted but repetitious handclapping. The soulful sounds, a mixture of classic Islamic and traditional African harmonies, seemed to lull his entire audience into a peaceful, trancelike state. It’s no wonder that practitioners of this music, who originate from sub-Saharan Africa, are also reputed to heal scorpion stings, cure psychological ailments and diseases, and cast away evil energy. (Our bill for three hours of drinking beer and eating fish, fresh fruit and olive salads, and other finger foods came to $25—for three of us!)

The following day, we embarked on a tour of recent—and continuing—residential condominium developments surrounding the eight-hectare Parc Champ de Course, near Chaaban in north-central Fez. As we strolled the cobblestone and tiled pathways of this urban park’s sprawling green space, children were playing on slides, seesaws, and climbing structures, and splashing in fountains as their parents relaxed, hiding from the scorching sun under the shade of tall trees. Teens passed us on skateboards, sweaty runners jogged by, men exercised on public outdoor gym equipment, and families tossed frisbees around. The meticulously landscaped botanical gardens billowed with beautiful flowers—red and white carnations, yellow daisies, and an array of multi-colored wildflowers. Palm trees, various cactuses, and towering old-fashioned street lamps lined the tranquil walking paths, and circled the man-made duck pond.

A myriad of high-rise residential buildings surrounded the park, trying to convince me we were in a cleaner, better-manicured version of Toronto, Boston, or Chicago.  Many buildings remain under construction, while those already built have plenty of units still available. Despite a 1,025-square-foot, two-bedroom, two-bath apartment with marble flooring, a beautiful traditional Moroccan living room, large terrace, air-conditioning, double-glazed windows, satellite dish, security system, parking, and a concierge, that’s close to all amenities, being listed at only $95,000—it’s still financially unattainable for most locals, who make, on average, $200 per month. Karl knows of expats who are teaching English locally, without knowing either Arabic or French, pulling in $2,000 to $3,000 per month, so a high standard of living is easily attainable for many Westerners.

Thanks to Karl, and his tour of the more charming and modernized sections of Fez, Beverley and I had gained a newfound fondness for this ancient capital city. We agreed that Morocco could be a viable retirement destination for some, but, for now, we decided to finish our tour of the country before deciding whether it could be for us.

No matter our final decision, I’d concur with that!

David Gibb is a retired private detective exploring the world in search of a personal retirement paradise with his wife, Beverly. This is part two of his trip to Morocco. You can read part one, here.

10 Things I Need in My “Overseas Paradise”

Is Morocco A Retirement Destination?