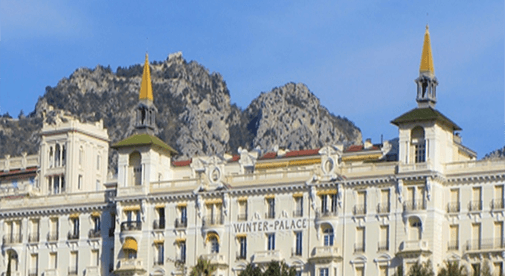 The Winter Palace with its yellow pinnacles is a landmark in Menton.

The city of Menton on France’s Côte d’Azur is said to have the best weather in France. Temperatures are always a couple of degrees warmer than neighbouring resorts on the Riviera.

Today, the glamorous period hotels of Menton, such as the Belle Époque Winter Palace, have been converted into elegant apartments set in lush gardens.

And as my senior research Margaret Summerfield discovered on a recent visit, you can make one of these ornate palaces your home if you’re willing to pay the price…

Discover what Margaret found below…

The Chic History of Menton, The Pearl of France

I’ve mentioned palace hotels in a couple of previous articles on Menton.

In the Belle Epoque period from 1880 to 1914, Menton was a playground for wealthy Europeans and Russians, along with aristocrats and royalty. They were “hivernants,” snowbirds exchanging cold winters back home for Riviera sun. To cater to these high-end clients, luxurious hotels were built.

Serious money was spent on bringing in top-notch architects, and creating opulent interiors using the finest materials. These palace hotels featured grand entrances. Rooms and suites were generous sizes, with sea-view balconies and terraces. Exotic gardens surrounded the hotels along with monogrammed fences and gates, preserving the privacy of guests. Managers were brought in from across Europe. One was the famous César Ritz, “king of hoteliers, and hotelier to kings.”

In World War I, many of these palace hotels were used as hospitals for soldiers. Post-war, the hotels boomed in the Roaring Twenties. Their decline started in the 1930s, when some went bankrupt. During World War II, they were requisitioned by German, Italian, and American troops.

From the 1930s through the 1950s, most were converted to apartment buildings. Twenty-one of these palace hotels now form part of “le Cercle des Palaces Retrouvés” (the Circle of Rediscovered Palaces), but only four remain as hotels. You can identify them by plaques like this at the entrance gates: 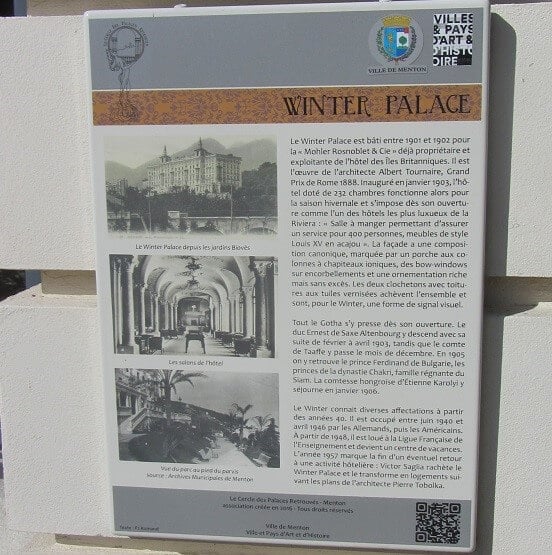 The Winter Palace is a local landmark with its distinctive pinnacles covered in yellow glazed tiles.

Construction began in 1901. The architect was Joseph-Albert Tournaire, who won the Grand Prix de Rome in 1888. When it opened it had 232 rooms and suites and the latest conveniences such as electricity, central heating, elevators, and en-suite bathrooms. The hotel had 60 staff, a high number when you consider that many of the guests would travel with their own personal servants. Archdukes, countesses, and the royal family of Siam (now Thailand) stayed in the Winter Palace.

In 1957, it was converted into 100 apartments. To buy one today, the start price is €230,000. That gets you a small one-bedroom apartment, of 495 square feet, with a kitchenette. It’s on the first floor of the building so you won’t get any views. There are large shared gardens around the building. Monthly condo fees are €150 ($178). There are no photos with this listing, so my guess is that it’s a gut job, needing a total overhaul.

The Grand Hotel National is another palace hotel, set high over the town, with impressive views. Built in 1880, its guests included Oscar II, King of Sweden; Baron Adolphe de Rothschild; and Grand Duchess Maria Alexandrovna, the daughter of Emperor Alexander II of Russia. The building still has some of its original glorious dining salon.

There’s a top floor corner apartment for sale in the Grand National with beautiful views and two balconies. It’s 1,500 square feet with three bedrooms and an open plan living area. It retains some original features like wood floors and a marble fireplace. It’s in good condition and priced at €690,000.

It’s a hike up a hill from Menton town center but with sweeping views.

Finally, the Imperial. This is just across the street from the beach and is in the heart of Menton. No hills to climb! It’s also set in nicely landscaped grounds. The building was designed by Danish architect Hans Georg Tersling. Construction began in 1911. Today, it’s a private condo complex.

Marie Curie, it’s claimed, tested radiographic equipment in the Imperial when it was an auxiliary hospital during World War I.

As I write, an apartment of 936 square feet is for sale in the Imperial. It’s on a high floor and has two bedrooms, a nice living room, and separate kitchen. There’s a small south facing balcony, with a sea view. It’s listed at €630,000.

These historic palace hotels aren’t to everyone’s taste. But they’re in good locations, often with landscaped grounds and privacy, yet close to everything Menton offers. Ideal for a private second home or if you plan to live full time in Menton. And, for visitors, they’re worth a look just to see how gorgeously lavish and huge they are—a real reminder of Menton’s glory days.

Barbara says: I am a subscriber to International Living magazine and many of these articles are from the perspective of Americans buying property overseas. I happen to have multiple passports, including British, and am interested in buying in Portugal. After Brexit, are rules different for Brits?

Ronan says: Hi Barbara. My question is, what are your other passports? If you hold an EU passport, then there are no restrictions on living in Portugal.

Since Brexit, a British passport alone no longer entitles you to the same rights to travel within Europe as it once did. As Britain is no longer part of the EU, you are limited to travel to Portugal for up to 90 days in any six-month period. So, if you want to live in Portugal full time, you need to apply for a visa, such as Portugal’s Golden Visa, D7 Residence Permit, or its Non-Habitual Residency (NHR).

Do This to Profit From Real Estate

What Kind of Real Estate is For You?