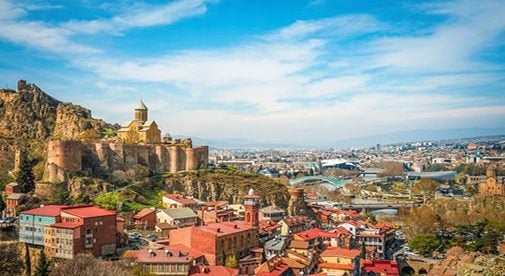 When people refer to Georgia, there’s often confusion about which continent this Caucasus country is on. In terms of geography, Georgia, which is bordered by the Black Sea, Turkey, Armenia, Russia, and Azerbaijan, is in Asia. However culturally, Georgians consider themselves European.

What’s more certain is that Georgia has one of the oldest—if not the oldest—winemaking traditions in the world. The country is also home to a cuisine that’s colorful, flavorful, and decidedly unique, thanks to Georgia’s position at the crossroads of East and West.

Archaeologists have discovered evidence to suggest that wine has been made in Georgia for at least 8,000 years. As a result, the country often refers to itself as the “cradle of winemaking.”

At certain times of the year, Georgian officials welcome tourists arriving at the airport with small bottles of Georgian wine. The message on these complimentary bottles greets travelers with the Georgian salutation of gamarjoba and invites visitors to accept the wine as a “sneak peek” of the hospitality that is yet to come during their visit.

Georgian wine is traditionally made in a qvevri, a massive clay vessel that’s buried in the ground. Reds like saperavi and tavkveri, as well as amber-whites such as rkatsiteli and kisi, are some of the country’s most popular varieties.

After the wine is fermented inside a qvevri for a few months, the remaining stems, seeds, and skins are distilled into chacha, a formidable pomace brandy that’s similar to Italian grappa. You’ll undoubtedly have the chance to enjoy copious amounts of chacha if you’re invited to a Georgian family’s home for a lively feast called a supra.

Non-alcoholic beverages like kompot (flavored with everything from stewed peaches to apricots) round out the list of popular Georgian drinks.

A Vibrant use of Fruits & Vegetables

Georgian food is fabulously flavorful—and colorful—thanks to the manner in which Georgian cooks incorporate fresh fruit, vegetables, and herbs into dishes.

Vegetable-based appetizers like nigvziani badrijani and phkaliare among the most popular you’ll see on Georgian menus or at a family feast. To make nigvziani badrijani, Georgian chefs fry long strips of eggplant, then coat them with a flavorful paste made with pureed walnuts, garlic, and vinegar, as well as spices like fenugreek. Once the chefs have filled and rolled all of the eggplant slices, they then garnish these bite-sized rolls with generous sprinkles of pomegranate seeds and chopped coriander. The result is a jewel-like dish that’s a feast for the eyes.

Like nigvziani badrijani, phkali is made using a walnut-garlic paste. What distinguishes the two dishes is that with phkali, cooks swap eggplant for chopped spinach, beets, or cabbage. They then mold this mixture into a round and plump, cookie-like shape that’s topped with pomegranate seeds.

There are several other common vegetable dishes, including a salad with walnut, tomato, and cucumber. Lobio, a kidney bean stew cooked in a clay pot with coriander and garlic, is frequently on the menu. Ajapsandali, a vegetable stew made with peppers, eggplants, and tomatoes, is also popular. It is similar to the ratatouille found in the south of France.

If you like doughy dishes, you’ll be spoiled for choice in Georgia. Khachapuri (cheese bread) and khinkali (dumplings) are, without a doubt, Georgia’s most famous comfort foods. These carbohydrate-rich dishes are so famous in Georgia that you’ll even find quirky socks and other souvenirs emblazoned with their playful likenesses.

Georgia has many types of khachapuri, but the most memorable is khachapuri adjaruli, a bread boat that’s filled with melted white cheese and topped with an egg, served sunny-side-up. Other types of khachapuri are egg-free and can be found in several different regions in Georgia. Their defining characteristic is the type of cheese used in the recipe.

While dumplings can be found throughout the world, Georgian khinkali have a unique shape that slightly resembles a pleated, white chef’s hat. Khinkali are usually filled with broth, as well as meat, cheese, or mushrooms. They’re traditionally eaten by holding on to the khinkali’s “knob,” and then biting into the body of the khinkali. It’s customary to leave the knobs uneaten.

The bread-centric dishes don’t end with khachapuri and khinkali. For something a bit different, try lobiani (bread filled with beans), mchadi (a gluten-free cornbread that often accompanies bean stew), or a basic white bread called shoti.

Watching Georgian bread being made is a treat in itself, as it requires the baker to have great skill and flexibility. Leaning into an above ground oven called a tone, which vaguely resembles a well, a baker slaps dough against the oven wall. After a few moments have passed, the baker retrieves the baked bread from the fiery oven by spearing it with a metal stick.

A Georgian feast is never complete without meaty offerings, a trait that’ll certainly please meat-lovers. Mtsvadi—skewers of pork, chicken, and mutton are well liked, as are stewed meat dishes like shkmeruli (chicken in a garlic-milk sauce).

Adjika, a spicy sauce made with hot peppers, garlic, and other herbs, is a common condiment. Other popular sauces include tkemali (a plum-based sauce) and satsivi, a cold, walnut-garlic gravy that often accompanies turkey.

Georgia’s fresh markets are chock-full with sweet treats bursting with color—and flavor. Churchkela, a snack shaped like a long candle, is made by stringing walnuts or hazelnuts onto a thread that’s at least a foot long. Georgians dip this string into a mixture of grape juice and flour, creating a long-lasting (if you can resist devouring it immediately!) snack that is slightly sweet.

Closely related to churchkela is pelamushi, a subtly-sweet treat that has a porridge or pudding consistency. Like churchkela, pelamushi is made with grape juice and flour. It’s often topped with a sprinkling of walnuts. Georgians make both churchkela and pelamushi during the autumn months, at the same time as the country’s grapes are being harvested.

Another sweet Georgian staple at Georgian markets is tklapi. This brightly colored “fruit leather” is made with a mixture of fig, peach, plum, or pomegranate juice. The mixture is thinly spread over a board and dried in the sun.

Georgia’s food and beverages offer something for every appetite. From sweet to savory, the country’s long and complex history has created a unique smorgasbord of different flavors. If you’re in search of new taste sensations, a trip to Georgia may be worth your while.