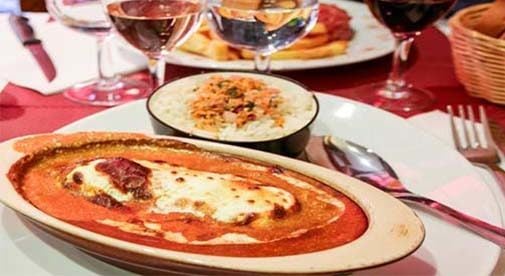 Lyon is the culinary capital of France and boasts plenty of local specialties. The original Michelin food critic, Curnonsky, called Lyon the gastronomic capital of the world back in 1935, and ever since the nickname has stuck.

Nestled in the East-central of France, Lyon is a stone’s throw away from the country’s most prestigious and prolific farmland and vineyards and has long been a center of culinary innovation.

Known as the gateway to the Alps, Lyon is home to some of the world’s finest cheeses and its East of the Auvergne region, which also produces many great cheeses. Just North of Provence and located at the intersection of two major waterways, Lyon has access to all of the best ingredients from throughout France.

Not to mention that Lyon is smack dab in the middle of serious wine country, with Beaujolais and the Rhône within minutes, and Burgundy very close by.

Home to an astounding number of Michelin starred restaurants; the home city of Paul Bocuse has plenty of traditional dishes to sample as well.

This fish dumpling main course is ubiquitous throughout the city. A demonstration of the chef’s patience and technique, this is a pike mousse dumpling bathed and baked in langoustine sauce. Plenty of mediocre versions abound, so make sure to order it at a place where doing so demands a 15 to 20 minute wait. The best versions will give you a light and airy dumpling with clean fish flavor in a decadent and rich sauce.

Andouillette is a strongly flavored sausage made from pig intestines and tripe. It’s often served with a mustard or red wine sauce. It has a pronounced aroma and those that love it will sing its praises from the rooftops. This chunky textured sausage is very particular, and not widely eaten throughout France. It’s not for the faint-hearted.

This almond tart is a local specialty. It’s a pastry shell with praline filling, made from sugared almonds, and a hefty dose of pink food coloring. Why pink? Nobody really knows the exact origin, but it certainly hails from the 19th Century, when the Industrial Revolution in Lyon was booming. You see these pink pralines all over the place, as candy, folded into baked brioches, on cookies, you name it. But the star of the show is always the tarte aux pralines.

This delightful starter is a green salad, often frisée, topped with crispy bacon lardons, a poached egg, and croutons. A sharp mustard dressing brings it together. This is probably one of the best, most decadent salads in the world, while still managing to truly be a simple green salad.

Cervelle de Canuts is a cheese spread, also known as “silk workers brains,” and consists of fresh cow’s cheese, fromage frais, mixed with herbs, shallots, olive oil, salt, and pepper. It’s a moreish dip for apéro hour or a crowd-pleasing starter. Named after the silk workers who (unsuccessfully) waged the very first workers’ rights movement in the early 1800s, this dish was something like what the impoverished workers would have eaten for breakfast. It was later picked up by the elite and named after the silk workers as an insult, implying that they were too poor to eat real lamb brains and had to make do with simple cheese.

These are the fanciest of the fancy French chickens and come from just north of Lyon. Blue-footed and gorgeous, these big, fluffy white birds have a protected regional status and enjoy true free-range living. They’re traditionally served in a morel mushroom cream sauce. The Poulets de Bresse must come farms from the small Bresse region, just Northeast of Lyon. They must be the specific, blue-footed breed, and they must be farmed according to specific regulations. They are pricey, but worth it for special occasions.

Invented by one of Lyon’s famous chocolatiers, Chocolat Voisin, the Coussin de Lyon is a small, green, pillow-shaped confection. Curaçao-flavored dark chocolate ganache is wrapped in turquoise marzipan and shaped like a tiny cushion. The shape is a reference to one of the city’s ancient catholic traditions, where there is a procession that involves a candle on a silk cushion.

This small, soft cheese will fit in the palm of your hand and comes from Isère, just southeast of Lyon. Made from raw cow’s milk, Saint Marcellin cheeses go from creamy to downright runny within a couple of weeks. When cured in white wine and covered in spent wine grapes, it is named Arômes de Lyon. These are very popular in Lyon, and are often eaten instead of dessert.

This classic Lyonnais dish is simply a fat, juicy pork sausage wrapped and baked in brioche. The soft, rich, and slightly sweet dough is beautiful with the salty sausage. Saucisson Brioché are typically made in the home, although you do see it in delis and restaurants from time to time.

What can I say, the Lyonnais love meat. Fromage du Tête, or headcheese, is an ancient peasant dish found across Europe but is particularly popular here. It’s a chunky terrine with plenty of meaty gelatin. It is made from cow’s head, but don’t worry, they clear the organs out first. It can be formed as either a cylinder or a rectangle and is served sliced.