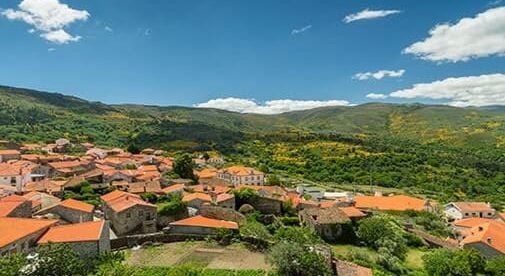 Where can you feel the freedom of countryside vistas and the cozy security of walled enclosures? Put your boots on a hiking trail and perch above it all? Taste Roman history as well as savory cuisine? That’s easy: Portugal’s Beira Interior region.

The Heart of Portugal

In 1991, the government initiated a program to restore and promote 10 historic villages, ancient settlements important to the country’s past. Two more were added in 2003, bringing the total to 12.

The relevance of the area lies in its location, close to the Spanish border, where the need for defense meant planting villages and castles to both populate and fortify the territory. Two major forces were Portugal’s first king, Dom Afonso Henriques, and Dom Dinis, the regent who signed the treaty establishing the final border with Spain.

Here’s a look at the villages, listed in order to facilitate a road trip.

This first is traditional in that like all these villages, it’s built of granite and schist. Yet it’s unique among the 12 because it lacks a castle. Perhaps that defense was unnecessary, because Piodão sits on a slope hidden in the wilds of Serra do Açor, near Serra da Estrela, the country’s highest mountain range. Be prepared for a long walk here—that’s the only way to pass through the narrow streets between the ancient homes.

This medieval village received its charter from the king in 1189. The castle at its center is strategically located to oversee the Mondego River, of Coimbra fame. Be sure to visit the Romanesque church with paintings on wood attributed to the grand master of the Portuguese Renaissance, Vasco Fernandes, better known as Grão Vasco (“The Great Vasco”).

Like these other settlements, Trancoso was a point of contention between Christians and Moors. In the 15th century, Jewish emigrants from Spain arrived, contributing to Trancoso’s cultural heritage. The idyllic village, with a population of about 3,000, features narrow stone streets, and notably, an entrance in the surrounding city wall honoring Dom Dinis, who married Isabel of Aragon here in 1288.

Tip: Sample a local specialty, sardinhas doces (sweet sardines), made of egg yolks, almonds, chocolate, sugar, olive oil, salt, and cinnamon. Their history dates to the late 17th century and the nuns of the Order of Santa Clara.

Although most of the buildings outside of the citadel here date from the 16th century, this beautiful medieval village has roots in Roman times. One arcane note: tradition has it that the more important a town was, the more steps its pillory had. The one in Marialva has an impressive eight.

Tip: Budget permitting, spend the night at Casa do Coro, for the superb food, wine, spa, and terrace views. (https://www.booking.com/hotel/pt/casas-do-coro.html)

Like all the villages, the perfectly restored hilltop village of Castelo Rodrigo is a place to experience on foot due to the narrowness of its streets. Explore the former fortress and enjoy the extraordinary views all the way to Spain.

This village takes its name from Arabic, al-Ma’ida meaning “the plateau.” But the Moors were latecomers, as this area has been settled since the Bronze and Iron Ages. In the 17th century, a fortress was built to protect the village, and one of the more interesting features is the star-shaped wall designs surrounding it.

A 20-minute drive from Almeida, large Iron Age statues guard the entrance to the castle here, where you can walk among ruins, tombs, and cisterns. The cozy medieval village was an important urban center because of its street markets and defensive position. Nowadays visitors are drawn to the annual medieval festival, which takes place in late March or April.

This medieval village’s castle, perched on a granite massif about 2,500 feet above sea level, has the distinction of being the oldest constructed Romanesque castle in the Beira Interior. Again, this is hilly, rocky, territory, and it’s fun to view both natural formations such as Cabeça da Velha, “Old Head,” or a charming resident we discovered, a granite elephant. A 14th century church, handicraft shop, and Restaurant Dom Sancho (ask if wild boar and chestnut stew is available), located at the Gothic gateway entrance, all combine to offer visitors a pleasant day.

Belmonte is quite a do-able, see-able town with several cozy cafés, antique stores, and souvenir shops. The castle offers more than simply ramparts, so be sure to visit the inside. Also of interest are the Jewish Museum and Museum of Discovery. Foodies may want to pop into the Museum of Olive Oil as well.

This castle, perched high on a hill, naturally offers panoramic views of the surrounding countryside. Visiting at certain times of the year yields other benefits, including festivals and concerts held at the lovely church at the base of the citadel. As you head back down to the main road—this village is just off the autostrada (A23)—on the right is a restaurant offering typical Portuguese food. On the left is a river beach, a popular local hangout during July and August.

Famous before being granted historical status in 1995, Monsanto was declared “The Most Portuguese Village in Portugal” in 1938. The oldest part is also the highest point, where Knights Templar constructed the keep. On the way up to the castle, you’ll pass a cave and the village oven. While here, you can see the original settlement built around the chapel of São Miguel, the ruins of Pião Tower rising above the village, and enormous rough stone boulders seemingly positioned by giants.

Tip: Casa da Tia Piedade (https://www.booking.com/hotel/pt/casa-da-tia-piedade.en-gb.html), is housed in a traditional stone structure, and less than nine miles from our final historic village.

Architecture buffs, you’ve come to the right place. Idanha-a-Velha is recognized as one of the oldest villages in the country, its heritage reflecting Celtic, Roman Classicist, Visigothic, Arabic, Medieval, and Portuguese Manueline influences. Another bonus: the 16th-century church holds the largest collection of Roman epigraphs in Europe.

Tip: As close to the border as this village is, it’s not surprising to find Spanish influence. At Casa da Velha Fonte na Casa da Amoreira, the owner—a former Lisboeta who traded city life for country charm—prepares superb paella. Call to order in advance.   (https://www.facebook.com/casadavelhafonteiav/