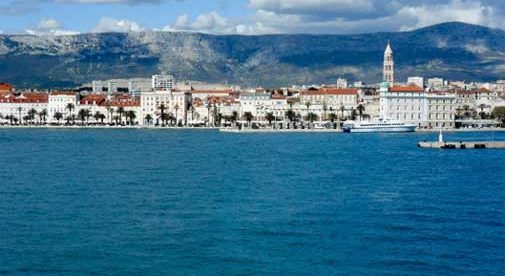 Sitting in a café next to the sparkling edge of the blue Adriatic, outside a palace built for a Roman emperor, I catch a glimpse of my ideal retirement lifestyle. With a rich, hot cup of coffee in my hands, golden sunshine filling my vision, and a stimulating conversation with other English-speaking expats, I can see what life should look like after a career.

The city of Split, nestled on a peninsula along Croatia’s rocky Dalmatian Coast, is the epicenter of a region filled with stunning sea views, ancient history, delicious wine, and welcoming people—many of whom speak English. Here, you can sip coffee at half the price of other Mediterranean destinations, without sacrificing sunlight or scenery.

In fact, many of Croatia’s fresh delights can be found at Split’s green market. Located just outside the 1,700-year-old walls of the Roman emperor Diocletian’s retirement palace, you’ll find dozens of stalls stuffed with locally-grown produce, artisanal honey, and lavender sachets.

Emperor Diocletian retired here in 305 AD. When envoys from Rome arrived at his palace and implored him to give up retirement and return to reestablish order in the “Eternal City”, he waved them off, citing his need to continue tending to his lush, sun-drenched garden.

Today, Rome is only an hour-long flight from Split, and the regional airport is only 30 minutes from Diocletian’s Palace. Other European cities are just a short flight away.

Split’s proximity to western European capitals is a distinct advantage. Croatia is the newest member of the European Union and is part of the North Atlantic Treaty Organization (NATO), offering the country geopolitical stability in an uncertain world.

Croatia’s international integration is most prominent along the coast. Ships of all flags and sizes can be seen entering and leaving Split. The most common are the daily Jadrolinija ferry lines shuttling residents and visitors to and from the Dalmatian islands.

Brač is one of the closest islands to Split. For just about $4, it can be reached in roughly 50 minutes.

Another attraction within easy reach from Split’s old town is the forested hill of Marjan. Just a few minutes’ walk from Diocletian’s Palace, my wife and I make frequent trips to Marjan. We treasure our evening strolls through the park while overlooking the islands and the sea.

Marjan’s trails are diverse, offering everything from leisurely walks, to vigorous running or cycling. It is the ideal backyard for a healthy and active retirement.

In search of the ideal retirement, an American couple, Terry Ruebush and Patrick Lickteig, were en-route to Thailand when they stopped for a month in Split.

“It was one jaw-dropping experience after another, and we fell instantly in love with Croatia,” says Terry. “At the end of the month, we both admitted that we didn’t want to leave.”

They flew back to the U.S., sold their house and belongings, and returned to Split.

Sitting underneath the palm trees, sipping a bold cup of coffee, watching the sun sparkle on the waters of Split’s harbor, and chatting with friends, it is easy to see why Terry and Patrick decided to make Split their new retirement home.

Cheapest Place to Live in the World

How to Retire on 1 Million

Where Should You Retire in Europe