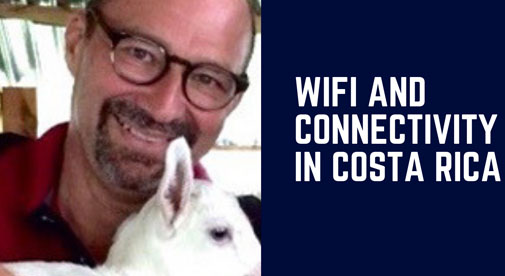 We’ve had a number of enquiries over the last year regarding connectivity in Costa Rica, internet, cell reception, that sort of thing.

Of course, people who want to move overseas want to know if the internet will be good enough to video chat their loved ones back in the U.S. or to send memes, videos etc. Maybe you’re also concerned about the ability to get DirecTV or other cable services like Netflix or Amazon Prime. I know I sure like to binge-watch my favorite shows. Well, the answer is that you can still have your home comforts and nightly routines even when you’re on an adventure in Costa Rica. So let me talk about some of these.

Is WiFi Good in Costa Rica?

Is the WiFi good enough in Costa Rica? Well, that’s like asking if it’s good enough in the U.S. Yes, sure. There are areas where it’s excellent. Before we moved to Costa Rica, in Dallas, we had about 75 megabytes, but only an hour and a half outside of Dallas at our lake house, we only had dial-up at 1 megabyte. So that is sort of the way it is here in Costa Rica.

Around San Jose in the most populous part of the Central Valley, you can get really high-speed strong internet. And in fact, Costa Rica is currently beginning to install fiber optic across the country. Now it’s only going to be in the Central Valley areas at first, before spreading out to the rest of the country. But even here out in the country where we live, out here on the slopes of Volcano Irazú, we have 10 megabytes.

We could pay for more. But we find that’s more than adequate for us to do anything that we want to do. There’s cable services available. In most remote areas, you may still have to use dial-up, and usually, you can get 3 or 4 megabytes with that. What we have at our house is an antenna that’s connected to an antenna on the top of the volcano across from us. It’s easy to get installed, and you can choose just about whatever package you want. Just so you know, the company that we use is called Boomerang Wireless, and we have a contract. The longer your contract, the better your prices. And yes, prices are a little higher than you might have in some places in the U.S., but we get 10 megabytes for about $55 a month, and it’s all that we really need. We do everything we want with that. No problems.

You may be wondering about cell reception. Well, I have an iPhone. Most ticos have smartphones. Everyone here has them. It’s not a big issue. And almost everywhere, you have 4G, or 3G in more remote areas. We have LTE most of the time with our cell phone coverage. There are three major carriers in Costa Rica, Movistar, Claro, and Kolbi, it depends on where you live. Just like in the U.S., it will depend on which carrier works best for you. For us, we found that Movistar is the best coverage everywhere we go. I don’t technically have unlimited coverage, but I never go over, and I use my smartphone not just for conversations, phone calls, and texting but downloading videos and using it like a small computer. I just paid the bill. It is currently, with the exchange rate we have now, just over $30 a month, and that includes calls all across the country.

My plan includes not just the high-speed internet through LTE, I get about 10 or 12 megabytes on downloads with my cell phone. And as part of my plan, I can use my phone in Panama, Mexico and several other areas around Central America.

You may be wondering, what about my U.S. phone? Well, if you change up the SIM card and it’s unlocked, you can use it here. T-Mobile now has a program that has an international plan. In fact, my husband, Michael, has his U.S. number, because he’s back and forth between the States and Costa Rica frequently. He uses his T-Mobile line here in Costa Rica with just the plan that he has in the U.S. and his complete coverage here in Costa Rica, as well, and doesn’t lose that connectivity to make calls to the United States.

Are you able to use Skype, WhatsApp and Facebook in Costa Rica?

The answer is yes, of course. Especially with the internet speeds that we have, you can pay for more than 10 megabytes, but we find that we can watch anything we want to watch on television, and we can talk to anybody without any trouble. Most Costa Ricans use WhatsApp for all of their phone messages and telephone usage, but if you are a fan of Skype or FaceTime, there is no problem. I talk to my kids all the time using these modalities, and when Michael is in the U.S., or wherever he is, we always use FaceTime. So that’s not going to be an issue for you.

Is Netflix and Amazon Prime Available in Costa Rica?

Netflix is available in Costa Rica, but it’s not exactly the same Netflix that you can get in the U.S., By that, I mean there’s some program changes, but it does not mean that it’s all in Spanish. There are a few more Spanish stations and Spanish movies, but still, almost all the rest of them are in English, and it’s the same kind of programming. If you just have to have Netflix from the States, then you can get that, too. There are some ways to have that done depending on how you connect your system. For example, we use an Apple Box and connect that way, and we don’t have any issues. Amazon Prime has geolocators, so they are a little trickier to try to pull in, but there are ways to do it. And in fact, we were watching just last night “The Marvelous Mrs. Maisel.” It’s our latest show that we like to watch on Amazon Prime. So yes, you can do that.

Can You Get U.S. Television Channels and Cable in Costa Rica?

The answer is, yes. But it’s not as easy as the other things we’ve talked about. There are a couple of things you can do. You can connect to what’s called Sky TV, that’s like DirecTV, but you don’t always get the same U.S. channels. We are actually connected to U.S. television through Ohio, believe it or not. We get all of our local channels through Ohio, but we have all the network channels and everything like that. Of course, we also use Hulu. You can pay for additional things like CBS, BBC, CNN, Fox, and whatever stations you like to watch.

So there you have it. That’s the breakdown on connectivity in Costa Rica. You’ll be fine. It’s not exactly the same as in the U.S. or Canada, but then if everything was exactly the same, where’s the sense of adventure?