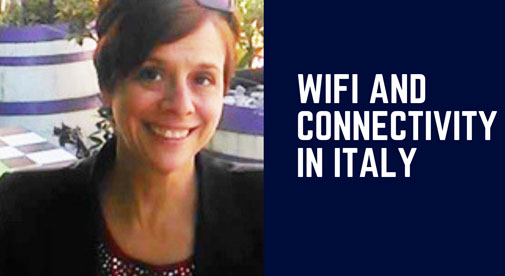 I’m Valerie Schneider, the Italy Correspondent for International Living. I wanted to take a few minutes to talk to you about connectivity, because this is a question I get asked frequently, both at the IL conferences and by email. People want to know what kind of cell phone plans they can expect and what kind of internet we have here in Italy. So let’s talk about cell phones first.

There’s a lot more options here in Italy for cell phone plans than we have in the U.S. You can swap out your SIM cards, because the phones are unlocked, so you can change plans whenever you want without being locked into a contract. I’ve changed a couple of times to take advantage of better offers. Right now, for example, I’m paying $13 a month. That includes unlimited calls within Italy, unlimited text messages, data, and 400 international minutes a month for $13. So there’s just a lot more flexibility and a lot more affordability in the type of cell phone plans that you can choose from here, and your number goes with you. So any time I change from, let’s say, Wind to Vodafone, I keep my phone number, and so that’s a really great benefit as well.

In terms of internet, of course, people want to know, “Can we be connected? What kind of internet do you have in Italy?” Well, this is, of course, a First-World European country, and it’s technologically advanced, so there’s really good internet no matter where you go. We live in a very tiny town, Basilicata, in the mountains in southern Italy, and we have high-speed DSL internet, and they just laid fiber optic cables even in our tiny village. So, we have very high-speed internet, and it’s very affordable. We pay $28 a month, and that’s a really good plan. And no matter where you go in the country, there’s either a DSL, there’s fiber, or there’s satellite internet available, and you’re never going to pay more than $56 a month for any type of these internet plans.

For example, right now they’re offering internet for $28. If you combine it with Sky, which is the satellite TV provider, they’ve got a promotion running that is $22 a month, so that’s a really great deal. Or there’s a phone, Sky, and internet plan through Fastweb. It’s $23 a month, and that’s for the first year. Then it goes up. That promotional rate goes to the regular rate, which is only $75 a month. So by contrast, my sister in Ohio said she’s paying $175 for internet and cable TV every month. So there’s some really great options to stay connected and to use the internet and combine it with these sort of bundles to take care of your technological needs.

Can You Get U.S. Television Channels and Cable in Italy?

Of course, we have satellite options. There’s Sky, which is the most common, especially among expats, because it brings in all of those channels they want to see from the U.S., but there are some other options as well through Mediaset or Infinity. And there’s a lot of streaming options as well, so whatever kind of shows you want to watch, you’re going to have those available to you.

Is Netflix and Amazon Prime Available in Italy?

Yes, there’s Netflix and Amazon Prime, here in Italy. There’s a lot of different kinds of satellite options that you can opt into, or you can buy a decoder and access different types of programs, too. So no matter where you go here in Italy, even in a tiny village like ours, you’re going to be well connected, and you’re going to not have any sacrificing of speed or connectivity.