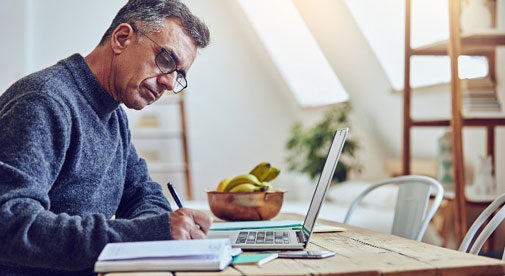 That’s not saying much, since I work from home every day. I’m a writer and editor, so I can work anywhere there is an internet connection. In the past 19 years I’ve called seven communities in four different Latin American countries home, and each one had internet. So working from home is the way I usually do things. I’m used to it.

But lately a lot of other people around the world are joining me.

Thanks to a global pandemic, they’re getting crash courses in tele-commuting—and tele-learning, and tele-shopping, and tele- just about anything else they can get done online instead of in crowds at workplaces, schools, stores, sports venues, etc.

“Social distancing” is the new normal—at least for a while—and anyone who can work while keeping their distance is being urged to do so.

I’m old enough to remember when tele-commuting first became a thing. The advent of the internet inspired predictions by futurists that it would spawn a whole new breed of “lone eagles”—wired-up workers plying their trades from cabins in the mountains or beachfront condos or in lofts over coffee shops in bucolic little Midwestern college towns.

Some of that actually happened, but the workplace where lots of people physically came together to cooperatively get their jobs done was never seriously threatened.

Personally, I don’t think it’s threatened now either. This too shall pass.

But the upside is that millions of people are suddenly getting crash courses on just what is actually doable online.

If you want or need a tele-commuting job, the world today is pretty much your oyster…if you’re willing to do a little paradigm shifting and retraining.

For example, I know a guy who built a business teaching people how to take what they’ve already learned in their regular careers and sell that knowledge online as a valuable information or consulting services. (More on him, here.)

I also know a guy who built a business traveling the world looking for real estate deals that he shares with a group of subscribers. They pool their buying power to get developers around the world to cut them exceptional terms on new developments in especially attractive markets.

As more people discover the many options they have for earning a living from home—and more businesses are compelled to facilitate tele-commuting—I think the face of the global workforce might finally move in a big way toward the vision of those first internet futurists.

It won’t be long before “social distancing” is no longer needed. Folks will go to stores, concerts, and sporting events just like before.

But more than a few shrewd folks won’t be going back to the office each day. They’ll be plying their trades from the comfort of their own homes, having learned how many income streams are amenable to tele-commuting.

And even more of them will realize what International Living subscribers have known for decades—that the home they work from can be almost anywhere on the planet. (If you’re not an IL magazine subscriber, you can pick up a subscription here.)

If there can be an upside to a pandemic that forces people to stay home for a while and rethink their options, I think this might be one.