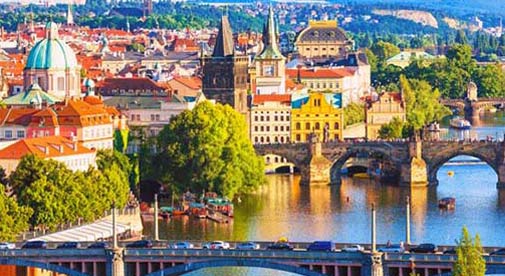 Few cities are as iconically European as Prague.

Because Hitler wanted to turn Prague into the cultural capital of a Pan-European Nazi empire, he spared the city from the ravages meted out on much of the rest of Europe. The result: Prague’s architecture and landmarks today largely exist as they always have and still reflect 1,200 years of Bohemian history.

And one of Prague’s greatest trait is that it’s so compact you can spend a day walking and see just about everything that makes this such a great city to visit (or live, as I do).

This is the iconic, pedestrian-only bridge crossing the Vltava River. The original bridge dates to the 1100s, though the version that exists today has been around since Bohemia’s King Charles IV. A Holy Roman Emperor, laid the first stone on July 9, 1357, at precisely 5:31 a.m. That specific time and date is, itself, a numerical bridge: 135797531—which Charles believed would strengthen the structure. No one, however, can prove that’s actually true.

The reason to arrive early: Because by about 9 a.m., the bridge is a mass of touristic humanity. Best to experience it as early as possible, when you’ll have the whole span pretty much to yourself.

After the bridge, head to…

The Guinness World Record holder for largest castle complex, Prague Castle opens at 6 a.m. and you can wander about freely. But exhibits inside the palaces and various churches open at 9 a.m., and you really want to see those. In fact, hire a guide, because its history is truly interesting. (For instance, the Thirty Years War, still one of the deadliest in history, began here in the early 15th century when Protestants threw three Catholics from a palace window.)

In particular, wander through St. Vitus Cathedral, the dual-spired church many wrongly assume is Prague Castle. (The entire complex is Prague Castle.) The gorgeous, ornate interior includes what is said to be the preserved tongue of a priest who, legend incorrectly asserts, was drowned by a king for not revealing the indiscretions of the queen.

Also, climb the 287 steps of the cathedral’s Great South Tower for an Instagram-worthy view of Prague.

We’re probably getting close to lunch at this point, so let’s head back toward Charles Bridge, through the absolutely beautiful, 600-year-old Mala Strana district, to a quintessentially Czech pub called…

Here, you can grab a traditional Czech pilsner from a 265-gallon tank, which you can see under the glass-fronted bar. These so-called tankovny pubs are common, since there’s very little storage space in buildings dating back several hundred years. The food menu, meanwhile, is classic Czech, with pork, duck, goulash, and lots of dumplings. Really tasty; really hearty.

Time to cross the Charles Bridge again… and you will now see why I suggested first seeing it early in the morning, before the crowds. We’re heading into…

The Astronomical Clock in Old Town Square is beautiful and you can walk to the top of the tower for a great view over the square. But, honestly, take your picture and move on. Watching the cuckoo-clock-like dance of figurines that happens is “meh” at best.

The Square itself, dating back more than 1,100 years, is one of the most picturesque spots in the city, with another dual-spired cathedral—the Gothic, 14th century Church of Our Lady Before Tyn. (If you’re here in the winter, this is where you’ll find Prague’s most-famous Christmas market.)

Wander through Old Town to the 15th century Powder Tower and you will pass along the Coronation Route that saw newly crowned Bohemian kings paraded through Prague on their way to Prague Castle. Pass beneath the tower and take a right and head toward Wenceslas Square, where in 1989, a quarter million Czechoslovaks gathered to bring down Communism.

Near the center of Wenceslas Square, a street—Vodičkova—cuts through perpendicularly. There, you want to hop on the number 9 tram at the Václavské náměsti stop. (Buy tickets at newsstands or hotels, among other places. An all-day pass is less than $5. Be sure to stamp your ticket in the machine inside the tram as you enter.)

Stay on the tram for five stops, exiting at Ujezd. Nearby, you’ll find a funicular (you can use your tram ticket) that will ferry you to the top of…

Petrin Hill was formerly part of King Chare’s vineyards. Today, it’s a leafy, hillside park covered in fruit trees (cherries, sour cherries, apples, pears, and plums) that you can pick in season. There are also pathways to the top of the hill, should you want to walk instead of taking the funicular.

At the top, you’ll find Petrin Tower, a miniature Eiffel Tower, with another great, bird’s eye-view over all of Prague.

But the main reason we’re here late is because there’s a small, outdoor beer garden—Petřínské Terasy—that offers a great place to relax, grab a famous Czech pilsner ($1.50 for a half liter), and spend a few minutes watching the day’s dying light bath the red-roofed city below in late-afternoon glow.

If, however, you’d rather spend your evening in pursuit of classic culture, check out…

In the heart of Old Town, this theater has been operating continuously since 1783, making it one of the oldest in Europe. It’s also where Mozart first premiered—and personally conducted—the opera Don Giovanni in October 1887. Today, the Estates regularly puts on a production of Don Giovanni, as well as other operas, just check the website first, since some days there are no performances.

7 Czech Towns You Should Visit Besides Prague