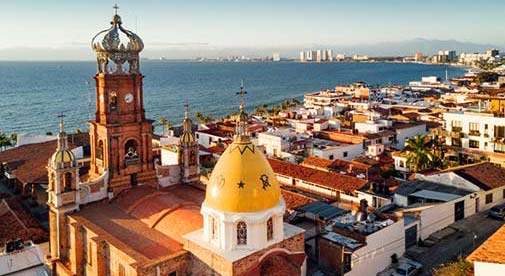 Florida has long been a mecca for retirees, but with that brings crowds and rising prices. If Florida is too hot, crowded, and expensive for you…then you need to check out these alternative retirement locations around the world. From Panama to Portugal, from the beaches to the mountains, we have seven great retirement destinations where a couple can live comfortably on a monthly budget of as little as $1,394.

Panama City, the nation’s capital, stands out as a true First World city in Central America. As well as offering top-rated healthcare and an active lifestyle by the ocean, it’s a city where high-speed internet and cell coverage are commonplace, making it a digital nomad’s paradise. And it boasts a much lower cost of living than similar cities in the U.S.

The cosmopolitan capital is like any modern city anywhere else in the world, with skyscrapers, new office buildings, condo complexes, and world class hotels with spectacular views of the Bay of Panama. It’s a major international commerce and banking hub–home to nearly 80 of the world’s largest banks, scores of international non-profits, and giant multi-nationals such as Federal Express, Dell, 3M, and many more.

International Living’s Panama Editor, Jessica Ramesch, is a great example of how moving here from the U.S. can lead to much more than a deeper suntan or a more active lifestyle. Jessica has been enjoying the city’s low cost of living, too.

“I’ve taken advantage of the good value, reliable hired help,” Jessica says. “When I lived in the green Clayton sector of Panama City, my gardener charged me just $15 for a full day’s work. I had him come by once every two weeks to help clear fallen mangos, cut the grass, and prune or weed as necessary. He even helped care for the delicate orchids.”

A couple can live well in Panama City on a monthly budget of between $1,753 and $2,900, depending on your lifestyle.

Expat Bob Normand, who lives in Quepos, says: “What I love most about living here is the small-town, laidback, friendly atmosphere. I can’t walk three blocks in Quepos without running into a tico (Costa Rican) or another expat and exchanging pleasantries. Friendliness is a well-known characteristic of Costa Ricans, and the Quepoans excel at it.”

Bob also enjoys the amenities and the low-cost transport options available to him.

“Local buses run less than a dollar a trip unless you are an official resident and 65-plus, in which case they are free. Rental cars typically go for $40 to $60 per day, inclusive of insurance. Longer range buses to towns one or two hours away cost less than $3. Direct (non-stop) buses to San José cost about $7 and medium range buses for both intermediate and long range are subject to a 25% discount for resident seniors.”

A couple can live well here on a monthly budget of less than $1,500.

Set on Mexico’s central Pacific coast, Puerto Vallarta first gained fame in the 1960s, when it served as the setting for the classic film, Night of the Iguana, starring Elizabeth Taylor and Richard Burton. In the decades since then this once quiet fishing village has grown exponentially into the world-class and world-famous vacation destination it is today, attracting travelers from around the world, as well as a large contingent of retirees and other expats—most from the U.S. and Canada.

Culturally rich, there’s always plenty of entertainment choices, as well as great dining options. With superb medical care and a large international airport offering plenty of direct flights from numerous cities in Canada and the U.S., the dynamic coastal town is an easy, attractive escape for retirees.

Bobby Blanchard and Nan Lippard sold everything they owned in the U.S. and came down on the bus with two suitcases to live together in Puerto Vallarta.

“We live on pesos; we’re conscious of costs,” says Bobby. “It happens all the time…people tell me how much something is, and I say, ‘Is that all?’”

Rent for their one-bedroom condo is $472 a month, which includes maid service and bottled water. There are also two swimming pools in their community. Because they don’t use air conditioning much, their electric bill is $7.87 a month. “We leave our doors and windows open 24/7,” says Bobby.

A couple can live well in Puerto Vallarta for less than $3,000 a month.

Cuenca, Ecuador’s third-largest city and the economic center of the southern sierra, has long been known for its rich intellectual, artistic, and philosophical tradition that matches its colonial architecture.

The city is famous for its colorful festivals, distinct food, and breathtaking scenery. Because of its history and state of preservation, Cuenca is one of Ecuador’s three UNESCO World Heritage Trust sites (the others are Quito and the Galapagos Islands).

It has been the fastest growing city in Ecuador since 2000, and now boasts a population of 580,000. Over 75% of the city’s residents live outside the historic center in what is called New Town. New Town features a mixture of the city’s first suburbs, plus many modern mid-rise condominiums. It also has four malls, numerous hospitals, grocery stores, cinemas, plus scores of restaurants serving a wide variety of international cuisines.

Florida native and IL Cuenca Correspondent, Donna Stiteler, moved to Cuenca in 2014. “Before I moved to Ecuador, I decided to run a spreadsheet to compare my expenses in Florida to Ecuador. I also wanted to make sure I could live off of my Social Security of $1,750. Now after living here for more than four years, this has turned out to be a great choice.”

Penang is a small tropical island off the west coast of Malaysia. It is a former British colony, so English is widely spoken. Its population is just over 700,000 with a majority of the people living in its capital, George Town. Penang is a multicultural island with about 60% of its inhabitants being Chinese, 32% Malays, and 7% Indian. Culturally it’s a mind-blowing place to live.

With a mix of these cultures, the food is touted to be the best in all of Southeast Asia. In 2014, Lonely Planet rated Penang as the top foodie destination to visit in the world. The most incredible food in Penang is not only found in high-end restaurants, but at  the many food stalls that dot the island, serving signature dishes that are often a family’s secret recipe passed down through generations.

Expat Bob Jackson, who lives in Penang with his wife, Patti thinks Penang’s greatest strength is its food. ““We have found the street food stalls to be very good and inexpensive,” Bob says. “Expect to pay no more than $5 per person to completely fill up. Slightly more expensive than the stalls are the numerous local restaurants where a great meal will only set you back $8 to $10 per person. Even the nicest restaurants will only cost around $25 per person.”

Located in the middle of Colombia, tucked into a valley surrounded by the Andes Mountains, is Medellín, Colombia´s second largest city. Known as the City of Flowers, Medellín is attracting more and more retirees who want to live an outdoor-based, active lifestyle in a city that has near-perfect weather, affordable healthcare, good-value real estate, and a lower cost of living than many cities in the U.S.

Medellín is strategically situated practically equidistant from Colombia´s other major cities of Bogotá, Cali, and Bucaramanga, making it an excellent hub for both commerce and tourism. Although the greater Medellín area has nearly 3 million people living there, the city really feels more like a lot of neighborhoods connected to each other by green spaces.  Accented with green parks, flowers that are always in bloom, gurgling brooks, and hundreds of birds in brilliant colors, Medellín feels smaller than the metropolis that it is.

Expat William Edwards, who lives in Medellín, says: “I think a person could live here comfortably for $1,500 a month. That would be your rent, groceries, entertainment, and eating out regularly. There are concerts and theater events that I go to that are not expensive at all. There are also a lot of free activities. I think the same lifestyle in my hometown in the U.S. would cost roughly double, or even more.”

Two hours north of Lisbon lies Portugal’s former capital, Coimbra, home to one of the oldest continually operating universities in Europe. Located in the building that housed Portuguese monarchs from the 12th to the 15th centuries, Coimbra University is the heartbeat of this vibrant city of culture.

Coimbra is Portugal’s version of Oxford. The Mondego River runs through this bustling city—in the Beira Litoral province in the center of the country.

Real estate prices in Coimbra are surprisingly affordable, given all that this magical place has to offer. For example, 10 minutes from the city center you can find a three-bedroom, fully furnished apartment on a one-year lease for as little as $1,000 a month.

IL Portugal Correspondent, Tricia Pimental, says: “As everywhere in Portugal, you can find breakfast at a café for a couple of dollars, lunch (soup, main dish, dessert, drink, and coffee) for about $11. At the highly rated (and hard to get into) Zé Manel dos Ossos on Beco do Forno 12, for instance, menu items run from $8 to $24.

A couple can live well in Coimbra on a monthly budget of $2,430.