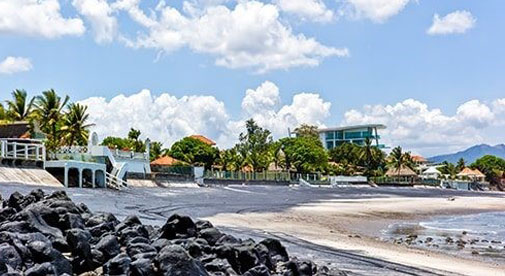 Sandy beaches on the Arco Seco coast of Panama stretch for miles along the Pacific. ©Hugo Ghiara

From the glittering lights of downtown Panama City, it’s an hour’s drive to the little beach hub of Coronado. In a matter of minutes, there’s a drastic change of view. Zip past the gleaming skyscrapers that line the half-moon of Panama Bay and over the historic Bridge of the Americas, and suddenly, you’re in the country.

The PanAmerican Highway snakes through the deep green hills of the Altos de Campana national park before taking you through one little beach town after another. They beckon with swaying palms and pristine sands…no crowds, no noise. Just the invigorating salt air and warm waters of the tropical Pacific.

It’s here that Judy Whaling and husband, Andy, have started a new life. Close to the cosmopolitan capital, with its sparkling nightlife. Mere minutes from the expansive beach. They can dine in the city’s gourmet restaurants anytime they like. And they can see the deep blue of the water from their apartment in Coronado. It’s a retirement lifestyle they couldn’t have afforded back in California…

A psychotherapist, registered nurse, and business/life coach, Judy was working hard back in 2011. The kids were in college, Andy had retired from his work (also as a psychotherapist), and she was just about ready to join him. Then she saw an episode of House Hunters International, which showcases people looking for homes outside the United States. It was an “Aha!” moment…the answer she didn’t know she’d been looking for.

“We knew we could not afford to stay in California,” she says. “So we thought, well…what about living someplace where you’d love to vacation? You could get up every morning and, instead of wishing you could stay on vacay, you could say, ‘I live here.’”

Judy and Andy had been to beautiful beaches in the Caribbean, but with no major city within easy striking distance, they just didn’t speak to her. She’d been spoiled for choice in California, where she could have any cuisine, and nearly any comfort or convenience. She didn’t want to give up too much in moving away.

“International Living was amazing because it rated different countries and explained the criteria,” says Judy. Panama checked a lot of boxes—in particular, she and Andy felt the country welcomed foreigners wanting to stay long-term. They visited four times and zeroed in on Coronado—a convenient beach town close to the bustling capital.

In Coronado, a couple can live well on $2,800 a month, including a nice apartment rental of $1,500 a month. It’s not the cheapest community here—there are folks living in Panama on less than $2,000 a month. But the location and climate are hard to beat.

This coastal region of Panama is known as the Arco Seco, or the dry arc. Rainfall is only 60-70 inches per year, compared to 100-120 in the mountains and on the Caribbean. Most every morning is sunny and bright, with average temperatures around 88 F during the day. As soon as the sun is gone, the air cools to about 78 F.

Ocean breezes entice residents to keep windows and balcony doors open…all the better to hear the sound of the waves. “I wanted to be able to hear the ocean. From the building we are in, I can hear it part of the year, and that’s perfect. That just feeds my heart,” says Judy.

Coronado has a bit of a hodgepodge look to it. The beach is white coral-based sand intercut with dashes and swirls of glittering black. And unlike Panama’s colonial towns, Coronado doesn’t have a main plaza set in the center of an orderly grid. Not all of the meandering lanes are well-paved, and houses run the gamut. You’ll see humble little cottages, mansions on grand fincas (large plots of land), and everything in between. There’s a security gate between the commercial and residential area, but most visitors’ cars are waved through with little ceremony.

Still, you shouldn’t be deceived by Coronado’s unassuming appearance. Many of Panama’s wealthy families have homes here, and the expat community is active and well-organized. “Golfers meet new people on and off the course, before and after games. And we are part of a church here,” says Judy, adding that the group has helped her meet people and get involved.

“Some of the ladies make blankets and collect clothing for the less fortunate. I joined a group that went into schools to help teach kids what to do with trash. There are also beach cleanups and Spay the Strays always needs volunteers…you can keep yourself very busy. There is an expat lady who hosts a lot of games. I play mahjong on Tuesdays, and others go for bridge or dominoes.” A local restaurant, Picasso, has become something of a community center in Coronado. “It helps the social life a lot,” Judy explains. “Lots of people go to their Tuesday morning market and Wednesday night happy hour—it’s great if you’re new.

“Now we have a couple pickleball groups and bocce at a community nearby. And another expat, Louise Belisle, provides a tremendous community service,” she adds. Louise is the president of CASA (the Coronado Area Social Association), which helps people network by hosting social activities and charitable events, and by posting informative newsletters. “She even tells us about local holidays and gives us little tips. You can plug into the Coronado expat community through CASA or All Things Coronado on Facebook, or see Playacommunity.com, and find out what’s going on—no need to ever sit home alone.”

Of course, no place is perfect, and there will always be new challenges, no matter where you move. “We’ve made friends, and we’ve seen friends leave,” says Judy, adding that it’s important to understand that expat communities are dynamic. “People are going to come, and people are going to go.”

Then there’s the—er, interesting way people drive in Latin America. “It’s frenetic. Or perhaps ‘spirited’ is the best word,” says Judy. “We do drive here, but we managed for our first seven months with no car, and it was fine. We would get the cellphone numbers of taxi drivers or private drivers and call when we needed them.

“Now we’re learning to take buses, and we prefer that. Coronado is a stop for big Greyhound-type buses to Panama City. We pay less than $5 each thanks to Panama’s retiree discounts. Instead of dealing with traffic ,we sit in air conditioning and enjoy more of the view, since on buses the seats are higher up.”

Judy remembers a time when Coronado wasn’t quite as convenient. Over the past 10 years, it has transformed. Much of what used to require a drive to the capital can now be accomplished right in Coronado. There are banks, shops, and even a new movie theater. One of Judy’s favorite additions is the Arrocha, a drugstore with sections for gifts, beauty products, kitchen and home décor items, and more. “I’m so happy,” she says. “There’s also a mall that’s very First World; I enjoy just walking through it, even if I don’t need to buy anything.”

Having an upscale Riba Smith supermarket is another plus—not too long ago these were only found in Panama City. “It’s helped because we missed places like Trader Joe’s and Whole Foods,” says Judy.

There are more restaurants in and around Coronado these days, too.“There’s a restaurant and resort in Ensenada that’s just beautiful, with views of the ocean.

They have two-for-one sushi on Wednesdays. A lot of the fast-food places around here deliver…Papa John’s Pizza, Subway… it’s very convenient,” she says.

For more impressive fare, however, there’s Panama City. “We are city people, and from Coronado we don’t have to get on a plane to get somewhere cosmopolitan— that’s so important,” says Judy. “There are amazing restaurants in Panama City that are not expensive. I can get Thai, Chinese, Argentinean, British—you name it.”

“We go once a month with a group we met through the American Society of Panama. Last time we went to a Scottish pub called The Wallace—the food and the décor were phenomenal. In Southern California we would’ve paid three times as much for lunch somewhere like that.” With the Panama City-Coronado region as their hub, Judy and Andy have also been able to indulge a love of travel. “There’s lots to see in Panama. We’ve been to Bocas del Toro, San Blas, Boquete…we’ve even driven to Costa Rica,” says Judy.

Travel to California is easy enough— there are direct flights to Los Angeles and San Francisco—but Judy and Andy prefer to bring their two sons down to Panama for visits. “Last year they were both here,” says Judy. “Our eldest stayed a month, and I think eventually he wants to move here. He was blown away by what $1,200 a month gets you in Panama City versus Bellevue, Washington.”

“We know that IL recommends renting before you buy, but we didn’t do that,” she laughs. “When we came out to Coronado and saw that we could get a view for less than a quarter of a million dollars, we said right away, ‘We’re in!’ It was like a dream come true.”

Being able to see and walk on the beach whenever she wants, Judy is content. “As a native Californian I remember a time when I could always get to the beach easily. I’d say ‘I want to study on the beach’ and be there in 15 minutes,” says Judy. Later, as traffic increased, that was no longer the case. “And I couldn’t afford a view in Southern California…not even for the weekend. Now, here I am in Coronado, looking out my bedroom window, and I see miles of shoreline, and mountains, too. This is gold to us…we struck gold.”

Pedasi is a Wonderful Place to Live for Ocean Lovers