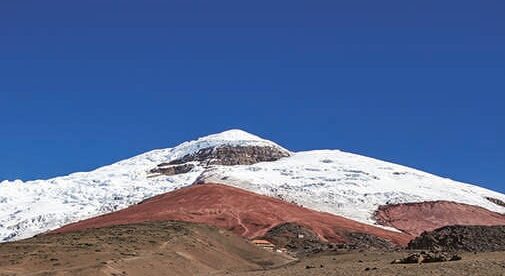 Cotopaxi is a formidable climb, with the added complication that it’s an active volcano. © Brotestudio/iStock

Steve Dow, 57, was ascending Ecuador’s Cotopaxi mountain. It was the final push—just one more 90-minute trudge to reach the summit. By then, he’d already been climbing for seven-and-a-half hours, and it all looked good until strong winds with gusts up to 40 knots sent him flying through the air.

Determination is natural in climbers though, and the mishap didn’t stop Steve or his three companions from trying to reach the summit. But the mountain had other plans. A second, and then a third gust of wind blew the roped-together mountaineers off their footing. Their ice axes were all that saved them from being cast off the mountain cliffs.

Just a few years earlier, Steve would never have attempted this; he would have been sitting behind his desk calculating taxes. He never imagined that he’d have the mental or physical ability to trek up 19,347 feet, through snow, to climb a mountain peak. But retirement in Ecuador has allowed him to pursue goals he never thought he could achieve—even if it might send him hurtling down one of the world’s highest mountains.

Steve had spent years thinking about retiring early from the long, strenuous hours he worked at his tax consulting business in Toronto, Canada. Realizing that he was sick of doing the same thing over and over again, every day, he started recruiting his wife to the notion of living abroad.

“We met on the dating website, Plenty of Fish,” says Kelly, who for 15 years was an intensive care nurse in Ontario. “I knew Steve was different than the other men I had met online when, instead of saying ‘let’s meet for coffee’ he took me to dinner and a play. He was a real gentleman,” she says.

Now married five years, the couple have already spent time exploring the delights of Europe. But merely traveling wasn’t enough. Their next step was finding a location to retire to, one that allowed for them to live comfortably and also pursue their love of adventure.

“When Steve started talking about retiring to Ecuador, I wasn’t sure I was up to it. We each have a child in Canada. I had just become a grandmother. And I wasn’t sure about moving to South America,” Kelly says. But you never know until you go, and the couple booked an exploratory trip, where Kelly admits she had a bit of difficulty adapting to the differences.

“I had lived only in the small town of Exeter, Ontario. Steve had more international experience. He’d been to Africa, where his parents were on a mission in Nigeria, so he had a different understanding of other languages and traditions. But after being in Ecuador for a short while, I fell in love with the people,” she adds.

Kelly’s “Aha!” moment came when she was walking down the street in central Cuenca. A young man leaned out of his car window and started talking to her. “I was a little afraid, because we’re in South America and I thought ‘Oh no’—just the regular concerns you have when you are a foreigner in a developing country. Then he said ‘I speak English. You look lost, can I help you?’ I knew right then and there that this was a kind community.”

That encounter was enough to start Kelly thinking seriously about retirement in Ecuador. Of course, she and Steve did more research, and it wasn’t a snap decision, but moments like that can spark deeper reflection. “One of my big pushes to try moving to Ecuador was that I didn’t want to do the same thing forever,” says Steve. “You go to college, get married, have children, get divorced. I wanted to do something different. I wanted to explore a different culture.”

By 2018, Steve and Kelly had settled into life in Cuenca, renting a modern, two-bedroom, two-bathroom condo for $500 a month in an Ecuadorian neighborhood, where they started to make friends with both expats and locals.

“When we first got here, it was like we were literally thrown off the cliff, especially because we didn’t know Spanish. We made friends with some expats who showed us the ropes, which helped us immensely in getting settled. It’s been a positive experience for us. It’s really relaxed here and there’s a high degree of acceptance.”

Their goal to have Ecuadorian friends came easily after they joined Cuenca Christian Church, whose 100-plus congregation is 70% Ecuadorian and 30% expats. “The service is in English and Spanish, and allowed us to make Ecuadorian friends and get immersed in their culture,” says Steve.

Because Cuenca is a good jumping-off point to explore South America, and because the cost of living in Ecuador is low enough that a couple can easily live off of $1,500 a month, Steve and Kelly have ample funds to travel. They’ve been to the Galápagos islands twice, where they snorkeled with barracudas, white-tipped sharks, and 500-pound greenback turtles. They’ve cruised down to Patagonia, where Steve walked on the Perito Moreno Glacier and hiked to the edge of Chile’s Torres del Paine National Park, known for its huge granite mountains and clear lakes.

In Cuenca, our health has improved substantially.

Besides travel, Kelly found that retirement gave her ample time to walk around downtown for hours, passing time in central Cuenca’s wide selection of shops and cafés, and exploring the Spanish colonial and French Republican architecture that earned the city its UNESCO World Heritage Site designation. She also took up watercolor painting and now takes private lessons from a Colombian artist, something she could not have afforded in the U.S.

Steve took up a different type of exploring—most notably hiking in the Cajas mountain range just north of Cuenca city. As a typical guy who had worked for decades behind a desk, Steve didn’t consider himself an athlete and had a few pounds to spare. “We started walking a lot here because we don’t have or need a car. I don’t want the stress of owning one. We can get around easily with taxis, catching buses, or hiring a driver for longer trips,” Steve says.

“Because we can get low-cost organic vegetables and fruits, and free-range meats, we both lost about 20 pounds,” says Kelly. “Our health has improved substantially. The year-round temperate weather allows Steve to do mountaineer training year-round and, on any day, I can get out and walk.”

When Steve caught the hiking bug, his health and stamina greatly improved. “I consider myself obsessive. When I set a goal, I can be OCD. I started slow at first going on local hikes with a guide, and taking long bike rides to get in shape.”

Steve now goes to the Cajas mountains, just 20 minutes from Cuenca, several times a week to train with friends. By the time he set Cotopaxi in his sight, he had already climbed 16,000 feet to summit Mount Carihuairazo, part of the Avenue of Volcanoes south of Ecuador’s capital, Quito.

His attempt to scale Cotopaxi was a goal he trained hard to achieve. “When we arrived at the landing lodge a few days before ascending to get acclimatized, we were the oldest ones there. All the rest were in their 20s and 30s and I’m sure they were thinking ‘What are these old guys doing here?’”

Timing is critial on a climb like this. It’s one thing to reach the summit, but it’s equally challenging to get back down safely. On this occasion, knowing that they’d need time for the four-hour descent, it meant a night start. Steve’s troupe began their journey at 11pm to reach the summit by sunrise.

“We put on our headlamps and started the ascent. It was so dark out so there, there wasn’t much we could see except for a few feet in front of us,” says Steve. To be safe, Steve walked in the snow footprints of his guide, putting one foot after another in the tracks, with his snow-covered hiking boots, weighty crampons, and 40-pound backpack challenging his pace.

With weather that could easily form icicles on your eyelashes in minutes, Steve wore two layers of gloves so his hands wouldn’t freeze to his ice axe, and bundled up in multiple layers of heavy coats, hats, scarfs, and face masks.

“We drank hot tea, which our guides fixed us and poured down our throats before it could freeze, because we couldn’t use our hands.”

Although he fell short of getting to the summit, Steve is determined to make it next time. “What drives me is the reward when you get to the summit and have these beautiful views. But I’m not disappointed that we didn’t make it to the summit of Cotopaxi. The walk down was beautiful. There were beautiful ice caves, glaciers to walk over, and inspiring views.”

It’s far from the typical rocking chair retirement, but it’s all part of the expanded horizons that so many expat retirees report when they consider their new lives overseas. It’s hard to get stuck in a rut when you change the very country you live in, and those changes that come with a new location often go deeper than simply eating more healthily or watching less TV.

“Mountaineering tests your fortitude,” says Steve. “At first, I thought about trying Cotopaxi again, but thought ‘Why would I want to put myself through that?’ But now I’ve had time to think about it, I’m going to get back on that damn mountain and do it.

“Just because I tried and failed doesn’t discourage me, it gives me more reason to try again. As Michael Jordan says, ‘I succeed because I am willing to fail over and over.’” Reflecting on his move to Ecuador, Steve says, “You only live once. I knew I needed a radical lifestyle change plus I wanted to explore another culture. But most of all, I needed a reason to get off my ass and do something new. I needed to get off the treadmill. And that’s what I did.”