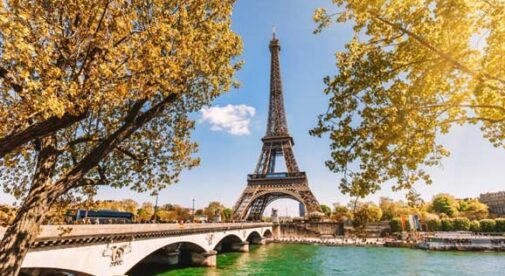 Nicole fell in love with France on her first trip. ©iStock/Nikada

The first time I visited France was over a decade ago. I walked hand-in-hand with my husband under a full moon paled by a thin fog floating across the river Seine, while we strolled to our charming hotel after a dinner in Montparnasse of duck and frites and an other-worldly fig tart.

It was a delayed honeymoon, as in, several years delayed. We renovated our first house instead. But there we were, better late than never, and like most visitors to the City of Light (and love), I was swept off my feet.

After reluctantly returning home, I could think of nothing but France.

The inevitable priorities of work and life meant we couldn’t return until some years later. We rented a car and drove to Normandy to visit the D-Day beaches and explore France outside of the confines of its most famous city.

My starry-eyed infatuation for Paris was quickly replaced by a heart so full of love for the French countryside, it felt close to bursting. It was somewhere between the gnarled old orchards and wind-swept bay of Mont Saint Michel that the idea of “someday” living here was planted. And like the seed of a tree that will someday bear fruit, the idea grew slowly but surely over the years.

We returned to France whenever time and work and finances allowed but each year that passed without putting our feet on French soil felt like a failed opportunity to discover more about a country we hoped to call home. So, each subsequent trip abroad was treated as a chance to experience everyday French life.

“Someday” was hard to put on the calendar when we still had so many working years ahead of us. Most people move abroad in retirement or, if they’re lucky, find employment overseas. Neither situation applied at the time but other aspects of our lives made us good candidates… We had no children to consider and my husband had spoken French since youth… We were both entrepreneurs and had supportive families…

But we also had all the usual reservations about an international move, so we put it on the backburner of our lives.

Someday, it seemed, would be a long way off.

So how did we finally make the move?

Like the simultaneous blooming of blossoms in spring, rather suddenly! We found ourselves between houses and jobs and unencumbered by any commitments except to our own lives, so “someday” had arrived.

All it really took was finally saying yes to the idea, to committing to the process…which moved rather quickly. Turns out, it was easier than renovating a house! A handful of months later, we found ourselves on a plane, not as tourists but as expats, full of nervous energy and looking forward to the future.

When we first arrived, we lived near the city of Rodez in the Aveyron. Then we spent some time near Biarritz in the Basque Country. Today, home is a small village between Bergerac and Sarlat in the Perigord.

We live in a small house on a quiet hill within walking distance to the center of the village. It’s roughly 1,110 square feet with the same amount of space below in a walk-out basement which we use as our business. We pay $690 a month for rent, with another $63 a month for water, trash, and electricity.

Our retired neighbor is our landlord and she asked for a simple, handwritten lease and one month’s rent as a deposit. Her husband keeps chickens and tends bees and we grow peppers and tomatoes in the summer, all of which get traded between us.

Before we moved to France, I remember brainstorming ways to live for around €2,000 ($2,244) a month and having friends and family tell me that was impossible. Compared to the cost of living in the States, I can see why they felt that way. But here we can comfortably live for €2,000 a month, sometimes less, and the money we save is put into savings or splurged on a vacation from time to time.

While my husband had a head-start in the language, I am just happy to be able to converse in a basic way with my neighbors. My biggest fear was not knowing French but I make some progress every day and benefit greatly from the kindness of my community. Old fears are slowly fading and have been happily replaced by the learning of a new culture.

Ten years ago, we could not even imagine when or how or even if we’d actually move abroad. France seemed like a faraway dream. Ten years later, we cannot imagine living anywhere else. France finally feels like home.