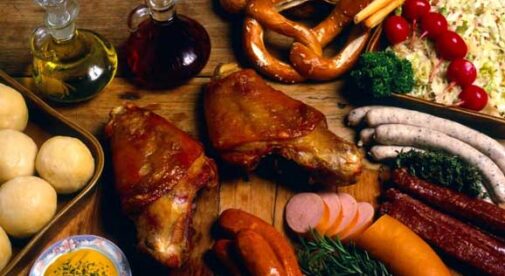 When you think of German food, you probably think of steaks, sausage, and beer. Yes, this is a part of the tradition, but there’s so much more.

The most interesting thing I’ve found here is that a lot of the foods below will only be cooked/baked and eaten at certain times of the year. While in the U.S., you can buy most things when you want them, here they tend to follow the seasons more and focus on eating foods in season rather than out. This means often more local foods and also much fresher foods as if you just picked it yourself from your own field.

In this overview of German food culture, I’ve picked out a few foods and traditions that are quite special.

Let me start with my favorite. When people ask me why I love living in Germany, this is usually my first (tongue-in-cheek) answer.

The weekend (usually Sunday) tradition of sitting for hours over a cup of coffee and one or more pieces of delicious cake or torte is wonderfully luxurious. In almost every town you visit, you will find an old-style café serving delicious cakes and pastries. My favorites, though you might have others, are anything with apple, anything with poppy seeds, or Schwarzwälderkirschtorte (Black Forest cherry cake).

I have never seen a people obsess more about a vegetable. When it is in season here (end of April-June) every supermarket plans a huge amount of Spargel, which customers fight for, particularly if the stock is low at a particular time.

Companies I worked for also always had this vegetable on the menu in the cafeteria during this time. People would get very upset if the cafeteria posted a sign sometimes that as they weren’t able to get enough for that day it would not be on the menu. Geez people, take a chill pill.

And restaurant upon restaurant will have a special Spargel menu during this time.

To be honest, I really can’t stand Spargel, so I’ve given many a wait staff a mini heart attack when I told them that no, I did not want to see the special Spargel menu.

Another very popular food is strawberries. When they are in season here (May-August), you may see people with their entire shopping cart filled with strawberries. Strawberry cake and pie are everywhere, you just can’t get away from them. And every food magazine will be gushing over the latest strawberry recipes.

I do like strawberries, but unfortunately, I’m allergic. C’est la vie!

As John F Kennedy said, Ich bin ein Berliner (I am a Berliner). As every German pedant will tell you, he actually said “I am a jelly doughnut”. That “ein” in the sentence is the problem, but this isn’t a German lesson today. A Berliner (or Krapfen in southern Germany or a Fasnachtsküchle in Switzerland, well the latter is more or less the same) is the food of choice at Carnival time. If you go to a bakery during Carnival, you may not be able to buy anything else (I’m only partially joking). If someone has say a birthday and wants to bring something in for colleagues, they’ll probably get Berliner, if it’s that time of the year.

Around Christmas time, German stores are replete with Lebkuchen (gingerbread) and special cookies called Weihnachtsplätzchen. It seems like every grandmother in the country has been sent their list of the required number of cookies to bake. This usually means at least 20 different kinds and at least 10 dozen of each. Well, maybe I’m exaggerating a tad.

I once spent nine hours with a friend baking six kinds. They were delicious, but we were exhausted when we were finally done at midnight. People will often give them to each other as gifts and many houses will have a plate of them at the ready when guests arrive during the holiday season.

Every region (and often individual towns and cities) have traditional dishes. Some are regional variations of well-known dishes, others are quite unique.

In northern Germany, these tend to be with some form of fish as the region is close to the North Sea and the Baltic Sea.

As you get further south, you get more and more meat-focused. They also tend to get heavier and heavier. As the world considers the impact of eating meat, many restaurants are offering lighter, more modern versions. But you can still get the heavy, traditional ones in places.

Traditional dishes tend to have a main meat component, a vegetable component, and a dumpling or similar component.

A couple of examples are:

Dessert as a Main Course

I first discovered in Germany that some foods that I would consider solely dessert can be offered as a main dish.

This can be something like the chopped-up pancake Kaiserschmarrn, typically found in southern Germany and Austria. It is usually served with vanilla sauce, apple sauce, or ice cream. Kaiser is German for emperor and apparently, the dish is named after the next-to-last Austrian Emperor Franz Josef I, who lived 1830 to 1916.

Another example is Dampfnudeln, large steamed dumplings served with all different kinds of fruits and sauces, depending on where you are in Germany.

Beer is one of, if not the oldest, beverage known to man. In central Europe, traces three thousand years old have been found.

Germany, or rather Bavaria (since Germany as a country didn’t exist until 1871), has the oldest beer purity law from 1516. In Bavaria today, most beer labels mention the “Bavarian Purity Law” while beers in the rest of Germany tend to refer to the “German Purity Law.”

Just like the foods, there is a huge regional variety of beer. Many people will (if possible) only drink the beer from their region. And there are many regional rivalries about this.

Of course, everyone claims the beer from their town, city, or region is the “best.”

Germany has a long wine tradition dating back to Roman times two thousand years ago. An old Roman wine-making villa has been found in southwestern Germany, where the main wine-making regions are today.

One of my favorites is the Palatinate with some wonderful Riesling white wines and also some astounding red wines that can rival the best. Other examples of wine-making areas in Germany are Rheinhessen and Rheingau.