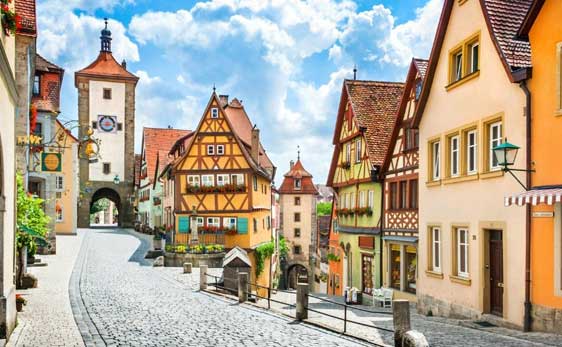 Germany is located pretty much in the center of Europe making it a crossroads north-south and east-west. From north to south it’s about 625-miles long, east to west about 450-miles wide. It borders nine other countries so if you live near one of them, there is a lot to see beyond just Germany in just a short drive. From the north going clockwise, there are Denmark, Poland, Czech Republic, Austria, Switzerland, France, Luxembourg, Belgium, and The Netherlands.

Germany has expansive coastlines and islands along the North Sea and Baltic Sea in the north and the large Lake Constance in the south. There are also several lake regions, such as in Bavaria and the state of Mecklenburg-Vorpommern.

In the southern part of the state of Bavaria, the Alps begin, so that makes the region quite mountainous.

Overall, there are many different regions and geography throughout the country. It is particularly spectacular if you love outdoor activities, such as hiking, biking, or skiing with trails throughout the country for every age and fitness level. The views along these trails are often breathtaking.

Close to 140,000 square miles, Germany is slightly smaller than the state of Montana in size though with a lot more people. While the population of Montana is around 580,000, Germany has over 83 million in the same space.

Divided into 16 states, the most populous are in the western part of the country. The highest population density is in the industrial Ruhr region, with many large cities, such as Düsseldorf, Dortmund, and Essen.

The capital, Berlin, is located in the far eastern part of the country not too far from Poland, and has the highest population of any city, at 3.7 million. The second highest is Hamburg in the north with 1.8 million people. Munich in the south comes in third at 1.5 million.

There are cities and larger towns spread throughout the country, but the country also includes several sparsely populated areas, such as the area north of Berlin to the Baltic Sea and parts of Bavaria.

How to Get to Germany 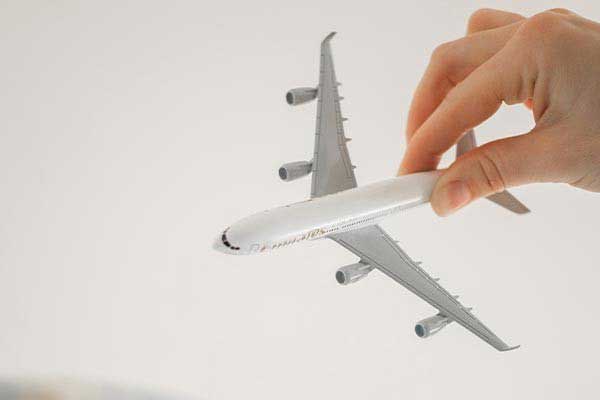 When thinking of Germany, most people probably think of Munich’s Oktoberfest or Medieval Heidelberg or just beer, but there’s so much more to see and do. And due to its central location and easy access to so many other countries, it’s a great place to start your tour of Europe.

Frankfurt/Main International Airport (FRA) in the western part of Germany, not too far from the French, Belgian, and Luxembourg borders, is one of the largest airports in the world. You can fly directly to Frankfurt from almost anywhere you want. As the main airport in Germany, numerous airlines fly there. The German airline Lufthansa flies direct from many North American destinations and elsewhere.

Munich also has an international airport and many airlines fly directly there from the U.S. as well. There are fewer direct flights from the U.S. to one of the Berlin airports, though this can vary with time of year.

Germany has a great, and extensive, train system (Deutsche Bahn), which can whisk you from the airport to many places around the country and elsewhere in Europe. One tip: the trains to smaller towns tend to be a challenge (meaning you will usually have to change several times to get there).

If you want to travel to many different places in Germany or to other countries, your best bet is to rent a car. A good option is Europcar, but others like Hertz are also available. When driving, note that some of the German Autobahn highway network still has no speed limit. It’s advisable to stick to the right-hand lane if possible as cars can go speeding by on the left at speeds well in excess of 100 mph.

Within cities, there are plenty of other travel options, like buses, subways, trams, or taxis (Uber is currently no longer permitted to run in Germany, though this could change).

Terrain and Climate in Germany

From windy seas and islands to miles of gorgeous hills and farmland to the mountains in the south, there’s not one climate or terrain.

If you love wine-growing regions, head to the southwest (in particular the beautiful Palatinate region).

Many rivers run through Germany, such as the Rhine, Danube, Neckar, and the Elbe and there are numerous lakes of varying sizes, so wherever you live there is bound to be at least some water nearby.

In general, you will find the weather is fairly mild with the four seasons sometimes seeming like one. Summers rarely get too hot (though west and southwest Germany can get over 100 F from time to time), winters tend to be fairly mild (rarely below 30 F) except in the mountains in the far south. It does tend to rain more than you might expect, no matter where you live. The weather can often change suddenly as well. One day it is 90 F and sunny, the next it is 65 F and pouring.

Germany (officially known as the Federal Republic of Germany) is a parliamentary republic with multiple parties. The head of state is the President (mainly a ceremonial role). The country is run by the Chancellor, who is also a member of Parliament as is the rest of the cabinet.

The main party since the founding of the country in 1949 has been the center-right Christian Democratic Union (CDU) with its sister party the more conservative Christian Social Union (CSU) in Bavaria. Currently, this party governs along with the more liberal Social Democratic Party (SPD). The balance of power has shifted over the years and the next federal election this September may see a new coalition take over.

The Judiciary is independent as in the U.S.

The official language of Germany is German. Throughout the country you will hear many different dialects, some of which could be considered separate languages, but they’re all still some form of German. The language spoken in the north around the city of Hanover is considered the “best” standard of German.

Many people in Germany speak English, so in most places you can get away with English. Though to really soak up the culture and understand the country, I would suggest learning at least some basics. And the locals will definitely appreciate that.

It will be particularly useful if you take a course before you travel or move, or try one of the many language apps, such as Babbel, Drops, or Duolingo. If you are moving here, many cities offer language schools for you to learn German or many other languages.

The north is known for its islands, lakes, and maritime culture. It is also very flat with most of the area close to or at sea level.

Places to see (or live) include:

If you want large cities, in particular ones that sprawl into each other, then check out one of the following:

There are many wine-growing regions in Germany, but the ones best known (and in my opinion producing the best German wine) are in the western/southwestern/southern part of the country, including:

The highest region in Germany is in the south along the Austrian border with the largest German mountain, the Zugspitze, topping out at almost 10,000 feet. The large city of Munich is fairly close to this region.

Well-known places to visit here are:

While many cities in Germany were completely destroyed during World War II, some weren’t or have been rebuilt to their old glory. Even larger cities tend to be very livable with walking and biking to shops, cafés, and restaurants the norm. And there are beautiful castles, churches, and medieval buildings still standing throughout the country.

The best examples of these and some lovely larger towns include: