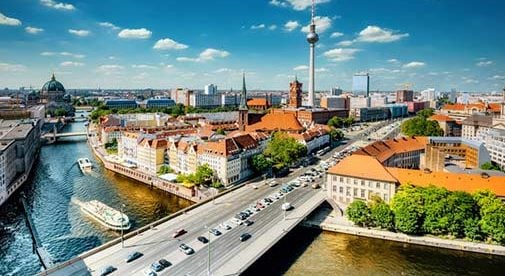 Here’s the thing about Berlin: It’s not Europe’s most elegant city. Where Vienna, Prague, Krakow, Paris, Budapest – pick a place – look like Old Europe, Berlin… well, not so much. It looks like it was built between the 1960s and early 2000s.

That’s not a knock against the German capital. It’s a knock against Nazis and Communists. Because they imposed on this city two events no other city has ever experienced.

First: 68,000 tons of Allied bombs leveled fully 80% of Berlin in the final months of World War II. The centuries old, classically beautiful architecture that once had Berlin looking almost Parisian was turned to rubble. And, second: For 40 years a wall rung the city, separating rapid economic development in the capitalist West from economic lethargy in the socialist East. When that wall came down, two wildly disparate halves of city had to be reunited.

The result of those two events defines Berlin today: An ancient city dating back nearly 1,000 years but which, incongruously, looks too young to be European. And that makes Berlin a truly unique city to visit. So, I say we begin our 24 hours in Berlin at…

The Topography of Terror

Not that anyone wants terror for breakfast, but this free museum is worth the fear factor.

In a previous life, the large patch of land on which this museum was home to the Reich Main Security Office, the Nazi arm that ran the two most-feared agencies in the Third Reich—the SS (the Nazi intelligence service) and the Gestapo (the secret police). From here, Heinrich Himmler and his goons plotted, planned, and executed the torture and extermination of political opponents. And it was where Adolf Eichmann designed and executed the Final Solution that saw two-thirds of Europe’s Jews murdered.

Outside the museum, a large number of displays in the bombed out remains of the basement of that former Nazi building offer glimpses of, and explain the torture and pain that occurred in the building on an almost-daily basis.

Inside the museum is a top-notch, sad, shocking, sometimes-infuriating collection of displays, artifacts, newspaper clippings and the like that document the horrors of life at that time. To anyone who relishes what history can teach about modern times, this is one of the best museums in Berlin for understanding what really happened in Germany in the 1930s and 40s.

For those who want a picture in front of what is one of the great icons of the “Cold War,” this is your place: Checkpoint Charlie—the U.S. Army checkpoint separating Western freedoms from a paranoid, Communist police state in East Berlin. It’s just a four- or five-minute walk from the Topography of Terror.

The checkpoint—one of four that once existed—was President John F. Kennedy’s response to the Berlin Wall, which arose surprisingly and literally overnight on August 13, 1961.

The bookend to the Topography of Terror—the Holocaust Memorial, one of the most unique memorials you’ll ever experience.

The 4.5-acre memorial specifically aims to disorient visitors as a way of dramatizing the disorientation Jews felt at having their everyday life upended in Nazi Germany. The memorial is a collection of more than 2,700 stele or concrete slabs that range from about ankle height to just over 15 feet tall. Some are straight, some lean, and the narrow pathways between them undulate. Moreover, amid the taller stele you never know if you’ll unsuspectingly come upon someone else walking in another direction. Again, it’s all designed to disorient.

Underground, you’ll find the “Place of Information” that mimics the pathways and pillars above and is meant to invoke a feeling of walking through graves.

The Brandenburg Gate is just a five- or six-minute walk from the Holocaust Memorial. And it’s one of the limited number of sites that has a real past, given that the gate dates to the 1700s.

This is the symbol of a modern, unified Berlin. But before the Wall came down, the gate was in East Berlin, within the Death Strip, a wide swath of land that separated East from West.

Over the centuries, the gate has hosted its fair share of famous/infamous figures, including Napoleon and Hitler. But the gate’s most-famous moment occurred on June 12, 1987, when U.S. President Ronald Reagan, standing behind the gate on the West German side of the Wall, aimed his famous line at Mikhail Gorbachev, leader of the Soviet Union at the time: “Mr. Gorbachev, tear down this wall!” It’s widely believed that marked the beginning of the end of communism, the Soviet Union, and the Eastern Bloc.

Just down the street from the Brandenburg Gate is the Reichstag Building— home to the German federal government. It dates to the mid-1890s and was designed to reflect Memorial Hall in Philadelphia.

The Reichstag is most famous for a fire—the infamous Reichstag Fire—that Hitler and the Nazis blamed on communist agitators and then used as pretext for the mass arrest of communists, including those in parliament. That move gave Nazis control over parliament and allowed Hitler to consolidate power quickly. As such, the fire has been viewed as a “false flag” operation designed explicitly to elevate the Nazi party to absolute supremacy.

Before you go, however, register online here and you can visit the beautiful glass dome. Inside the dome, there’s a walkway that spirals around the glass, giving you fabulous, bird’s-eye views over Berlin. If you want, plan your visit for the evening, a beautiful, nighttime view of the city. The dome is open until midnight.

Finally, you have to visit the DDR Museum—an interactive collection of artifacts and experiences designed to give you a real taste of daily life inside the Deutsche Democratic Republic, i.e. East Germany.

The museum offers exhibits on everything from a simulator where you can drive an old Trabant (the tin-box East German car), to a five-room, life-size walk-through display of an apartment in a typical, Soviet-era high-rise concrete block.