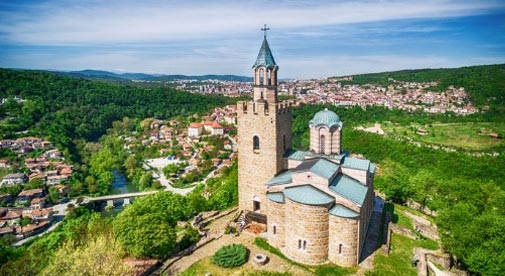 Do you want to hike among soaring peaks in a remote national park this summer? Maybe you want to explore the same crooked cobblestone streets that ancient kings walked before you. Or, maybe, you just want to relax, floating on a shimmering blue lake while your worries float away along with you.

Mountains, medieval towns, lakes, and so much more are just waiting for you to discover them in Eastern Europe this summer. If you’re ready to get off the beaten path on your vacation, consider traveling to this less visited but no less beautiful half of the European continent. Not only will you enjoy fewer crowds at these destinations (especially during the peak travel season), but you’ll also be able to save money and stretch your budget further.

Whether you want to hike for miles or relax on the water, get swept up in the excitement of a major city or soak up some ancient history, this list of the top summer vacation destinations in Albania, Macedonia, Bulgaria, Croatia, Hungary, and Ukraine has you covered.

Theth National Park is a hiker’s paradise. If you’ve always dreamed of hiking through the Swiss Alps but don’t have the budget to make it happen, consider spending your summer vacation exploring the Albanian Alps instead.

Theth is a small town nestled into the Prokletije mountain range, which is also known as the Albanian Alps or the Accursed Mountains. Legend has it that three brothers went out hunting here and met a beautiful fairy. They killed each other in a battle for her love, and their mother, in her despair, cursed the mountains forever.

Now, modern-day Theth is a two-hour van or jeep ride from the nearby city of Shkoder (which itself is a two-hour bus ride from the capital city of Tirana) but there’s just one catch: there’s only one dirt road leading in and out of this mountain town. This makes for a bumpy and somewhat nerve-racking first impression, but your stresses will melt away as soon as the soaring peaks come into view. With no tour groups, guides, paragliding flights, white water rafting trips, or other such excursions in Theth you’re guaranteed some peace and quiet on the trails, the most popular of which are the trek to the Blue Eye of Theth, a shimmering blue-green waterfall and swimming hole, and the 12-mile round-trip climb to Valbona Peak.

There isn’t a single restaurant or bar in town, but the family running your guest house will keep you stuffed with traditional Albanian foods like home-cooked bread, fried pork, roasted lamb, stuffed peppers, and fresh vegetables sourced from the farms and gardens in the valley. A four-day, three-night stay with transportation, food, and accommodation will only cost about $250 to $350 for two, making a trip to Theth even more tempting as one of the cheapest destinations on this list.

Lake Ohrid is a great summer vacation destination for travelers looking for both culture and relaxation. The 138-square-mile lake was named a UNESCO natural site in 1979 and the lovely Old Town followed in its footsteps to become a UNESCO cultural site just one year later.

Lake Ohrid is located just three hours by bus from Skopje, the capital city of Macedonia, and straddles the country’s border with Albania. Once you arrive at the water, it’s time to decompress. Reserve beach chairs at the Cuba Libre Beach Bar and just keep the beers coming. If you’re feeling more adventurous, take a boat trip across the lake to the St. Naum Monastery, founded by St. Naum of Ohrid in 905 AD, where you can marvel at frescoes, take photos of the peacocks wandering the grounds, and even get a peek at the nearby freshwater springs feeding the lake.

There’s also plenty to see without leaving Ohrid’s Old Town. Some claim that the city used to have 365 churches (one for every day of the year), and though they don’t all still remain the architecture and history of the city is breathtaking nonetheless. So, spend a day wandering the winding cobblestone streets, popping into the shops, museums, and cafes that catch your eye, and catching a sunset at the Church of St. John, a picturesque chapel perched high on the cliffs above the water.

What about the food at Lake Ohrid? Here, of course, seafood reigns supreme, and you can’t go wrong with dishes made with freshly caught fish from the lake. Start your day with an energizing fruit smoothie at Fruit Box in the city center and finish it with trout, homemade pasta, a mojito (or three), and expansive lakeside views at Kaneo Restaurant on the water.

Veliko Tarnovo is a small medieval town in central Bulgaria. It was the capital of the Second Bulgarian Empire and home to ancient kings, but its history goes back even further than that—archeological excavations have found human settlements in the area dating back 5,000 years.

Getting to Veliko Tarnovo will require a quick three-hour bus ride from the capital city of Sofia, Bulgaria. Once you arrive, plan to spend some time simply marveling at the town’s unique beauty—the red-roofed houses cascading down the cliffside and the winding river lined with lush green trees are just begging to be photographed.

Afterward, it’s time to dive deeper into the city’s past. Visit the Tsarevet’s Fortress where you can walk along the sprawling walls and admire modernist frescoes inside the small but memorable Ascension Cathedral. Then, browse the shops on Samovodskata Charshia Street and end your day watching the sunset at Asen’s Monument, which commemorates the first four kings of the Asen Dynasty and boasts some of the best views of the city.

If you have a car and an itch to explore more, it’s possible to reach the old communist Buzludzha Monument on a half-day trip from Veliko Tarnovo. Entrance is forbidden, but the eerie abandoned UFO-shaped building perched high on Bulgaria’s rolling hills still makes for some spectacularly unique photos. The Krushuna waterfall and Devetashka Cave are only 1.5 hours away from the city as well.

Plitvice Lakes National Park is one of the most beautiful natural places in Eastern Europe, famous for its ethereal landscape of 16 stunningly blue lakes interconnected with cascading waterfalls.

It’s the oldest national park in Croatia, designated in 1949, and one of the most popular. Although it stretches across an impressive 114 square miles, the lakes themselves make up only a small portion of the park and can be visited in a single day. Multiple routes run through them based on the length of the trek you want to take, so grab a map at the front office and spend a few minutes talking to the staff to decide which one is best for you before you set off to explore. Whichever route you decide on, your ticket will include a free shuttle and boat ride to help you complete the circuit.

Entrance fees at the Plitvice Lakes change seasonally and tickets are the most expensive in the summer, so expect to shell out $38 per person for a day pass to the lakes (from open to 4 pm) if you visit between July 1st and August 31st. If you can, spend the night at a hotel nearby and wake up early to beat the crowds for the best experience.

Plitvice Lakes National Park is conveniently located between the capital city of Zagreb and tourist destinations like Split and Dubrovnik on the coast, so whether you travel through the country by bus or by car it’s easy to add a memorable day at this park to your Croatia itinerary.

Budapest is one of the most popular tourist destinations in Hungary, and for a good reason: this city has something for everyone.

For foodies, the culinary scene is spectacular with six Michelin-starred restaurants. (The cheapest of which, Borkonyha Winekitchen, serves entrees for only $21 to $27 each.) History buffs can fill their time with trips to the Fisherman’s Bastion, the Buda Castle, the Hungarian Parliament, Heroes’ Square, and St. Stephen’s Basilica among many other sites. Even nature lovers will find respite in this concrete jungle with a stroll through Margaret Island or a scenic ride on the Janos Hill Chairlift.

Budapest is also a leading summer vacation destination in Eastern Europe because the season is packed full of festivals and special events. Some of the most popular are the Formula 1 Hungarian Grand Prix in August, which draws a crowd of 100,000 people, and the Sziget Festival, which boasts more than 1,000 musical and cultural performances during its weeklong run.

Simply put, there’s always something happening in Budapest. Whether you’re catching a show at the Hungarian State Opera House, browsing the stalls at the Central Market Hall, or slowing down to enjoy a drink at the quirky Szimpla Kert ruin bar, one thing is for sure: it’s impossible to be bored in a city as vibrant as this.

Lviv is a bit of a newcomer on the Eastern European tourist circuit. But, it’s one of the best places in the region to visit this summer because budget airlines like Ryanair and WizzAir have recently added new routes to the city, making it easier and cheaper to reach than ever before.

Lviv is a charming city of 700,000 people with stand-out architecture in a colorful Austro-Hungarian style—after all, this city was part of the empire, and then Poland, before borders were redrawn after World War II. If Ukraine has been on your radar, there are many reasons add Lviv to your vacation itinerary this summer.

First, the city is incredibly walkable, with multiple blocks of the historic center closed off to traffic for pedestrians only. In addition to this, the cost of living is almost absurdly affordable at times: meals typically run between $3 and $6 per person, and you can add on a pint of craft beer for only $2 more. The city is home to multiple craft beer breweries, so plan to spend an evening sampling the latest concoctions from Pravda, one of the biggest in Ukraine, at their three-story beer theater (with a live orchestra) in the central Rynok Square.

The culinary scene in Lviv is also notable. Themed restaurants are scattered throughout the city like Lviv Coffee Manufacture, a mining-themed cafe where waiters with blowtorches light your coffee on fire, and Kryivka Pub, a military-themed bar built into a World War II bunker.

Which Eastern European Destination is Right For You?

With all of these amazing options, how will you ever choose the best one for your Eastern European vacation this summer?

Let’s break it down a little more simply. Theth National Park is the perfect place for nature lovers looking for an exciting mountain adventure on a budget while a few days at Lake Ohrid, though just as easy on the wallet as Theth, will be much more relaxing.

Plitvice Lakes National Park is the most expensive experience on this list but also so unique and beautiful that it would be remiss to leave it off your Croatia itinerary this summer. Veliko Tarnovo, Bulgaria, will leave every traveler in awe of the millennia of human history that’s taken place in the Medieval town.

Finally, Budapest, Hungary, and Lviv, Ukraine are the perfect destinations for city-dwellers, foodies, and culture-lovers alike looking to get off the beaten path and discover the charm that Eastern Europe is just waiting to reveal.

No matter what kind of experience you’re searching for, the diversity of Albania, Macedonia, Bulgaria, Croatia, Hungary, and Ukraine can provide it. These six vacation destinations in Eastern Europe truly have something for everyone and are just waiting for you to come and discover them.