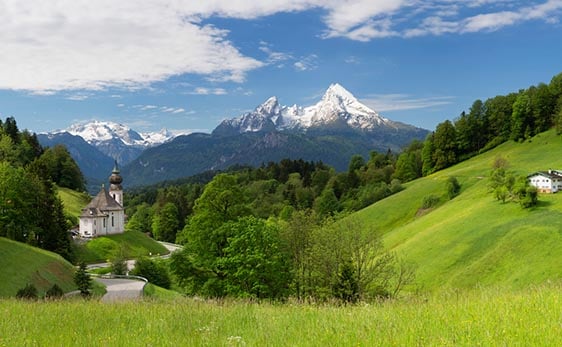 By Tricia A. Mitchell

If you’re thinking of moving to Germany, you probably already know that the country is a little shorter on sunshine hours and warmer temperatures than the Mediterranean coast. Simply put, Germany’s weather tends to be wetter, cloudier, and more unpredictable.

However, all that extra moisture has an upside. The German landscape is filled with dense forests, verdant meadows, and rolling green hills.

You’ll also find Germany’s climate to be a good fit if you want to be in a place with four distinct seasons. These fluctuations in weather offer a wide range of activities throughout the year.

In addition to four seasons, Germany can be divided into four separate climate zones: northwestern, northeastern, southeastern, and southwestern.

Each zone has its own variations and characteristics. Here is an overview of each region.

The southwestern region is comprised of the states of Baden-Württemberg, Hessen, Rheinland-Pfalz, and Saarland. This region has arguably the most favorable climatic conditions.

Home to cities like Karlsruhe, Heidelberg, and Freiburg, Germany’s southwest is the warmest part of the country.

The Pfalz (Palatinate) region is one of the mildest and sunniest climates in the country. Historically, this area has seen upwards of 1,800 to 2,000 hours of sunshine. These traits have earned the Pfalz the nickname, “the Tuscany of Germany.”

The German Wine Route weaves through the landscape of the Pfalz, with white and red grapes being cultivated here. Unusually—at least for Germany—fig trees and lemons can even be grown in parts of the Pfalz.

Within this region, you’ll find environmental differences ranging from a coastal maritime climate along the North Sea coast, to temperate continental climates in the Rhineland.

Average temperatures during the months of July in the northwestern region have a high around 73 F and a low around 55 F. In January, temperatures range between 41 F and 32 F.

The cities in the lower half of the northwestern region will experience more dramatic swings in temperature due to their distance from the sea. Cities in the northern half will see greater seasonal swings in sunshine hours.

The northwestern region is also the most densely populated area of Germany, resulting in less green space and more concrete. This will result in hotter summer temperatures in concentrated urban areas.

These states make up the former country of East Germany that dissolved at the end of the Cold War. However, while political tensions may have thawed, this region remains physically cold.

The temperatures along the Baltic Sea coast are more moderate. However, the rest of the region can become quite frosty due to Siberian cold fronts. Occasionally, they will become incredibly powerful, resulting in the nickname “The Beast From The East.”

Bavaria is the state that makes up the southeastern region. Average high temperatures in Munich, the capital of Bavaria, range from 73 F in July to 39 F in January.

Bavaria is also home to the foothills of the Alps. Snowfall and inclement weather will increase dramatically in these higher elevations.

An Activity for Every Season

In the warmer months, Germany offers an abundance of outdoor pursuits. Across the country, you can enjoy activities such as hiking, cycling, kayaking, swimming, and paragliding.

Also during the summer, swimmers flock to the beaches of the North and Baltic Seas. They also visit Germany’s crystalline alpine lakes and the country’s many outdoor swimming pools (Schwimmbäder).

The spring and fall months offer a wide selection of outdoor concerts and theatrical performances. They also feature food and drink celebrations such as Munich’s Oktoberfest, asparagus festivals, and wine grape harvests.

As parts of Germany dip below freezing, you can partake in downhill skiing, cross-country skiing, and sledding. Many of Germany’s winter resorts are in the Alps, with Garmisch-Partenkirchen being one of the country’s most famous.

The Harz Mountains in northern Germany and the Black Forestin Germany’s southwest are other spots where you can enjoy winter sports. And if you fancy swimming year-round, don’t despair, for many communities offer indoor swimming pools.

Chilly temperatures certainly don’t keep Germans from celebrating outside. As a result, Germany is well known for its Christmas markets.

From Berlin to Nuremberg, people huddle together with friends or family among twinkly lights, enormous Christmas pyramids, chalet-style huts, and ice-skating rinks. Glühwein (mulled wine), rum-spiked hot cocoa, and fried fest food are bound to warm you up and get you into the festive spirit.

In Munich, hundreds of costume balls even take place.

Unfortunately, the effects of a changing climate have already begun to be felt in Germany. Experts are predicting more heat waves and precipitation, and less frost in the decades to come. While this may be beneficial to winegrowers in the Pfalz, it could have a significantly negative impact on ecosystems and agriculture.

As a result of the variable effects of global warming, it is important to consider how a changing impact will affect the region you are thinking about living in or visiting.