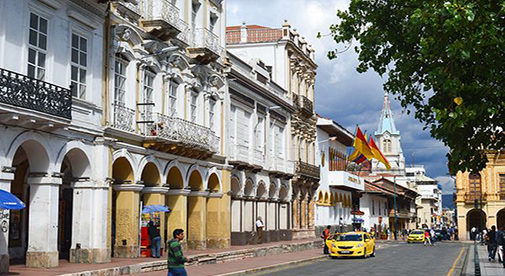 Typical colonial style buildings in the center of Cuenca.

With a pastor father who used music to inspire, an actress mother who was a stand-in for Joanne Woodward and sang in the theater, and a brother who founded folk-punk favorite Violent Femmes, Glenn Gano’s DNA has music running through it. “My brother and I loved to sit around and listen to my father play,” says Glenn. And now, after moving to Cuenca, Ecuador, Glenn has the time to reclaim his dormant talents.

“Being retired gives you the time to do things that maybe you had lost the time to do while working. When you do something that you did when you were younger, it does bring you back in time, it makes you feel young. There’s a nostalgia element to it. It’s like being on summer break again. You can get busy doing fun things.

“My upbringing was right out of the sitcom That ’70s Show, about teens spending time in the basement with friends, listening to Bob Dylan,” Glenn says. He started earnestly strumming his guitar in high school. But after majoring in music and theater in college, Glenn started thinking twice about making his living from playing in a band, especially after traveling with his brother Gordon’s band and going on the road for a year. “I was in charge of the group’s fan club and selling t-shirts, but I saw firsthand what that life was like and it was not for me. I felt if I had to be relying on theater or music to make a living, it would become strictly work. I wanted to keep music as something I enjoyed.”

Glenn put away his musical ambitions and focused on raising a family and building his career in computer technology. He and his wife, Mara, went on to have two children. When the kids moved out to start their own lives, the Ganos decided to restart their own lives, too, and began thinking of retiring early. They started researching places, centering their search on locations that didn’t require shoveling snow.

After reading about Ecuador in International Living and taking an exploratory trip, they decided on Cuenca. That’s because, as Glenn says, “Guayaquil was too hot… Cotacachi was too small…but Cuenca was just right.”

Cuenca’s location in the Andes satisfied their love of mountains, and they appreciated its spring-like weather. The city’s 15th- and 16th-century Spanish-colonial and French Republican architecture give it a cosmopolitan feel. And as the de facto “cultural city of Ecuador,” it always offers a choice of music and theater.

More than 7,000 expats call Cuenca home, so the Ganos made close friends and started getting involved with the music and theater scene. After a little while living there, they discovered that they didn’t need to have a car, because public transportation is inexpensive ($3 taxi rides or 30-cent buses), and they didn’t need air conditioning or heating, because the climate is temperate.

Real estate in Cuenca costs a fraction of what you’d expect to pay in North America: A typical price for a two-bedroom, two-bathroom condo in an upscale part of town is around $120,000, and renting something similar costs around $750 a month. Ecuador gives a 50% discount on transport to seniors, and fresh fruits and vegetables from the daily market come direct from the producer, so they cost just $5 for a large bagful. Expats moving to Cuenca regularly report losing weight just by being outdoors and more active. And many medications that would need a prescription in the U.S. are available over the counter in Ecuador. With healthcare costs roughly 80% lower than in the U. S., Cuenca is definitely economical. For the Ganos, it’s also filled with creative opportunities.

“After moving to Cuenca, I had more time on my hands. I discovered YouTube tutorials on how to play all these songs I had learned by ear or sheet music. The tutorials taught alternative tuning and fingering to go with these songs, which made them sound more like the originals. I enjoyed relearning songs, but then I thought, ‘No one gets to hear them but me.’ When I saw an open mic at a restaurant, I thought I’d try it out. I was well received, and I enjoyed playing for them. Now I play there once a month but recently expanded to other venues, as well, just because I enjoy doing it.”

Although he plays for fun, Glenn does bring business to the restaurants. So he now receives some proceeds, as well as tips from the audience. “I work for guitars,” Glenn says, because although he came to Cuenca with no guitars, he now has six. He uses the money to support his growing hobby.

“Performing feels great. I don’t do a song unless it means something to me. If I play a song that is poignant or funny and share it with people, I can tell by their eye contact that they are enjoying it—that’s why I do it.”