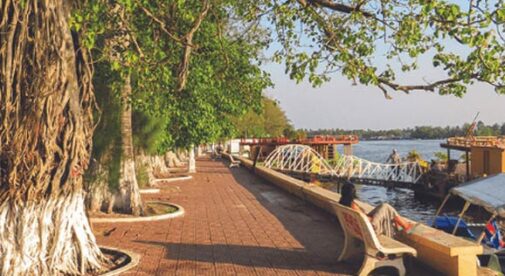 This southern Cambodian city is famous for its French colonial past and high-quality pepper. ©Eoin Bassett/International Living.

I can’t imagine a better standard of living,” says Matt Mancini, waving a hand to encompass the city of Kampot, Cambodia. It’s a riverside town in the south of the country that has historically been a refuge from the Southeast Asian hot season. A place that grows almost visibly week to week, and yet it still seems somehow embedded in the past.

Kampot wasn’t Matt’s first destination as an expat. After retiring from his career in the army, he spent time living in Rochester, New York, developing a career in logistics, which gave him the opportunity to travel. He spent a couple of years living in the Philippines, and then in Thailand, before he ever came to Cambodia. “I have two main interests,” he says. “Off-road motorcycling and history. Thailand had enough of both to satisfy me for a while, but Cambodia has a lot more.”

Slow traveling around Cambodia for a year, Matt spent time in the capital— Phnom Penh—as well as in expat hubs like Siam Reap and Sihanoukville. With his exploration done, he chose to settle in the decidedly sleepy Kampot. “I was looking for a slower pace, but with enough active expats to have a good social life,” he says.

At first, Matt rented a two-bedroom place in a block of six apartments with a shared pool, for $500 a month, furnished. “My utilities were another hundred bucks, and I spent $400 to $500 a month on everything else.”

Living on roughly $1,100 a month, Matt spent his first few months in town exploring the riverside and the nearby highlands on his motorcycle. He mapped the town, finding his favorite restaurants, both local and international, and making new friends.

“I’d lived in Thailand for a couple of years and was used to cheap living, but some things here, like local food, are hard to believe. Prices like a dollar for a full meal. Steak dinners for about $3, and a dollar a beer.” It’s not all street food stalls and basic diners, though. There are plenty of more exclusive restaurants along the river that serve meals for special occasions.

After six months, Matt decided to sink his roots a little deeper and rent a house somewhere that was a bit quieter, with more privacy. He found the place he was looking for upriver, a couple miles out of town on a private piece of land. As an added bonus, it cost even less than the townhouse, and his utility fees dropped by half.

“The house was built by a local contractor for a Cambodian family who, in the end, decided to rent it out,” says Matt. “I’m the first foreigner to live in it and I think the family enjoys that. It has four bedrooms and two bathrooms, with a Western kitchen. Outside, it comes with nice fruit trees, good shade, and I have a little workshop to keep busy in. It’s all bigger than I need, but manual labor prices here are very low. I pay my cleaner $5 a week. She comes in three times a week and takes away my laundry for another $5.”

I don’t need to spend a lot of money to enjoy myself.

Though Kampot is a relatively undiscovered expat destination, it’s been a much-loved getaway for many hundreds of years. When Cambodia was governed by the French, the Kampot area was the choice spot for officials to get away from the capital. Its proximity to the sea regulates the heat, and the highlands nearby experience some of the lowest temperatures in the country.

There were pepper plantations along the river and French-style castles in the highlands were home to high-ranking government officials, living alongside the Cambodian royal family, who had been coming to their riverside palace for generations. In the 1960s, the area attracted monarchs and heads of state from around the world and glamorous icons such as Jackie Kennedy. That’s not Matt’s scene, though.

“I don’t need to spend a lot of money to enjoy myself,” says Matt. “I mostly eat out with friends at international places where a meal costs a few dollars and the beers are cheap. I might spend $50 a week on food. My internet and phone cost about $20 a month, the only other expense I really have is insurance for my bike, which is $35 a year.

“I’ve explored a lot of the country by motorcycle with like-minded friends who are up for a bit of adventure. We get out and see the real countryside. I like to explore old temples, and there’s no shortage of undiscovered ones all over the country. Because I’m on a motorcycle so much, I do think about medical emergencies. I have good yearly insurance from the U.S. That covers me here and in Thailand, which is where I would go if I had a major medical problem. So far, my visits to the doctor have involved bumps and bruises and I’ve paid in cash. No visit has ever cost me more than $20.”

And with such low day-to-day expenses, Matt gets to treat himself to the activities he wants. “If I want to travel locally or abroad, I don’t even have to think about it, considering what I spend in a month. I may not stay here for the rest of my life,” he says, “but right now, I can’t see myself being anywhere else.”

Why Expats are Moving to Cambodia