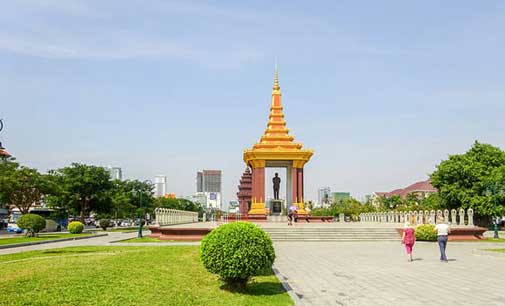 Cambodia is known as the Kingdom of Wonder thanks to its rich culture and ancient temples. It is a charming country that’s not only popular with tourists but with a growing number of expats as well. If you are considering moving to Southeast Asia you should put this country on your radar.

Cambodia is a country which offers an affordable cost of living. A monthly budget ranging from $1,500 to $2,000 is enough to cover all the basics and even leave room for plenty of creature comforts and social activities.

You’ll find a variety of local and international restaurants. The cost of a dinner for two can start from $10 to $20 including drinks, or if you’re looking for something fancier then $40 to $50 will be enough for a couple to indulge themselves at a top tier restaurant.

It’s important to note that the era of war is long over and the country is considered a safe destination for foreign tourists and expats. The government and the police consider the security of its foreign guests a high priority and take any reports of crime seriously.

Cambodia has also embraced modern technology, with mobile and internet infrastructure easy to access and of a high quality. There are several different mobile operators who offer great deals on international calls to the U.S. for as low as a few cents per minute. Mobile internet packages are some of the most affordable in the world too, with 10GB of 4G LTE data costing as little as $1.

Why Expats are Moving to Cambodia

Some expats move to Cambodia because of the low cost of living, others because of the open and welcoming visa regulations, while many are also drawn to the country’s burgeoning business opportunities.

Both young and older expats have found it possible to reinvent their lives and careers in Cambodia due to the high demand for Western skills and international work experience.

Cambodia has three international airports with many connecting regional and international flights, making flying to the country easy and inexpensive. A return flight from the U.S. via South Korea or Taiwan can be bought from a number of major airlines for between $800 to $1,000 depending on the time of year.

Becoming a Cambodian resident is as easy as applying and receiving a visa either online or when you arrive in the airport. All you need to get your visa is to fill out a short form, present a passport with at least six months’ validity, provide two passport photos and pay a small processing fee.

The country actively encourages foreign retirees and small business investors by offering an accessible long-term visa extension system with very few restrictions compared to other countries in the region. There are no age or income requirements nor any complicated paperwork or extensive documentation needed.

A 12-month visa extension costs $285 and can be processed in as little as three days by using the services of almost any travel agent.

Moving to Cambodia is both straightforward and inexpensive which may well be the reason why it is rapidly growing into one of Southeast Asia’s most popular expat destinations.

Learn more about Southeast Asia and other countries in our daily postcard e-letter.