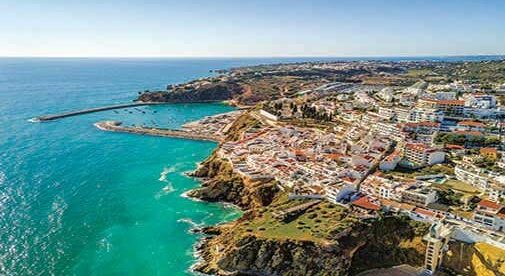 I’m on Portugal’s Algarve coast, in the town of Albufeira. It’s my first time in Portugal. I don’t speak the language. I don’t have friends or family here. I’m technically homeless. After years of living in Panama, I’m in search of a new base in southern Europe. It’s an adventure and a voyage of discovery rolled into one.

From a distance, Albufeira looks like a traditional whitewashed village sitting on steep hills that slope down to a golden beach. There are so many hills and slopes, that Albufeira offers multiple ways to get to the beach. Tunnels, elevators, stairs, even escalators. In the 20th century, Albufeira was a fishing village. From 1930 to 1960, factories and businesses in the town closed, and the population fell by half.

Then, in the 1960s, with the advent of cheap jet travel, Portugal’s Algarve became attractive to vacationers. Northern Europeans in particular flocked to its sun-drenched coast. Albufeira went from fishing village to tourist destination almost overnight. Its market isn’t fancy or high end. In season, Old Town and The Strip are normally packed with partying tourists. Not the kind of tourist I’d want to party with, either. They’re a younger crowd, looking for fun…but fun that’s not too foreign.

Irish and British folks often say it’s cheaper to spend a month in places like Portugal in the winter than paying the heating bill back home. Old Town is awash with cheap bars and “English” breakfasts for €5 (about $6). Menus in English are for French fries and pizza, chicken wings, and kebabs. The menus in Portuguese, on the other hand, offer traditional favorites like cataplana (a fish stew), bifana (pork sandwich) and fresh, grilled sardines.

I’m not staying in Old Town or The Strip. Instead, I’m in a small condo complex on the crest of Cerro Grande. The position means incredible views of the ocean. It also means a killer climb when returning from Old Town, the marina, or the beach (they’re all a 10-minute walk from here).

Cerro Grande shows another side to Albufeira. There are a couple of condo complexes, and lots of very large single-family homes on big plots. The homes have swimming pools and gardeners trimming the pomegranate, lemon, and orange trees.

They’re a world apart from The Strip’s tacky bars and tattoo parlors. Swing a left from the marina and you can see some condos under construction. These are large and luxurious, with ocean views, and serious price tags. Amenities include landscaped gardens, pools, a spa, and jacuzzis.

A three-bedroom condo will set you back more than a million euros.

Would I put my hard-earned cash into any of these? I think not. I can’t see where your future gains would come…whether on the capital front or rental returns.

They’re lifestyle buys, when you’re buying for personal use and any gains are gravy.

I can’t picture the lifestyle buyer who’ll shell out more than a million for a condo in Albufeira, either. It’s got a reputation for cheap vacations and must be crazy in the summer when it’s packed with people. It definitely doesn’t scream high-end or luxurious—or million-dollar condos.

Nevertheless, the condos look swank, high-end, with huge expanses of glass facing the ocean. Every day, workers swarm over the site. But you don’t have to look too far to find a ghost of the past.

Not so far away, there’s a huge abandoned project. It’s fenced off, the lettering on the fence faded away. A billboard, barely legible, promises ocean-view homes. The website and phone numbers listed are no longer active.

The project looks like it dates back to the last great economic crisis of 2008. It’s the worst kind of failure—only partly built. The kind of project that few want to buy. Unlike finished homes, you can’t sell each unit individually. You need an investor or developer. And, sensible developers don’t want to take on foundations and walls done by someone else, or foundations and walls exposed to the weather for more than a decade. Any problems would be their responsibility to put right.

This failed project flags up one of the basics of buying pre-construction property: Know your developer.

One of the basics: Know your developer.

I’ve come across countless wannabe developers in my 15 years doing this job. In fast-moving markets, when real estate prices skyrocket, everyone wants a slice of the pie. People with no background in construction, engineering, or project management decide to become real estate developers. I’ve met folks who have built a couple of single-family homes back in the U.S. and think it qualifies them to do a high-rise block in Latin America. I’ve met others who have run from failures in other countries and are raking in cash from a fresh round of naïve buyers who don’t do their research.

There are no guarantees in real estate, but you can cut the risk. One way is to go with an established developer, with a strong track record of delivering quality product, and a slew of happy customers.

My search for a base continues. Albufeira, the wild card, doesn’t make the cut. Will anywhere on the Algarve fit the bill? I’m off to Lagos next, a much more tempting prospect. Time will tell…