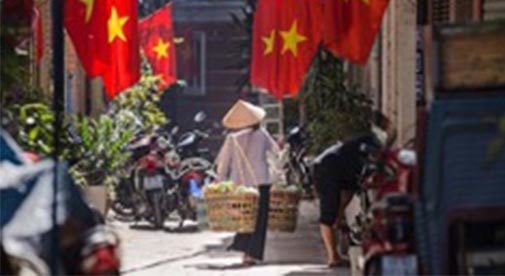 The tantalizing aroma of steaming bowls of beef noodle soup and freshly baked baguettes wafting from food stalls lining the bustling sidewalks. The cacophony of thousands of scooters ferrying passengers to every corner of the city and beyond. Old men repairing brightly colored clothes on ancient Singer sewing machines. These memories stayed with him long after the war.

Originally from New York State, Michael revisited Vietnam in 2003, 2005, and 2006 and found the country even more enchanting than his wartime memories.

When he retired from a successful career as a professional photographer, he decided to make Vietnam his home, returning to Saigon, now known as Ho Chi Minh City (HCMC)—the city that had captured his heart and imagination all those years ago.

Michael is now settled in District 1 in HCMC, at the end of a long alley in a Vietnamese neighborhood. “This was a deliberate choice on my part. I wanted to integrate with Vietnamese society,” he explains.

Today, the number of English speakers is on the rise, but Michael is keen to learn the language of his new homeland. “I’m at the stage where when I talk to Vietnamese people, they pretty much understand me, which leads them to think that I know more than I actually do, so they start talking back to me rather quickly,” he says. “As a last resort I use one of the translation apps on my phone.”

There’s no doubt Vietnam has an abundance of charm, but there were other, more pressing factors that propelled him there. “Simple economics for one,” says Michael. “I’m priced out of living anywhere decent in the U.S.,” he says. “I’m living quite comfortably here on a quarter of what it cost me when I left southern California.”

“Here, I have a fully-furnished, 350-square-foot, one-bedroom penthouse apartment in a small, new, nine-unit building,” he says. “Rent works out to about $600 a month, including electricity.”

Food is cheap and delicious in Vietnam’s largest city. “Weekdays I either order in or go to a local restaurant. I spend about $5 to $8 per day, but on weekends I tend to splurge and go out to more upscale places, spending $20 to $30.”

Getting around is also pretty easy for expats. “I primarily use a motorbike taxi unless it’s raining, it’s a long trip, or I’m carrying my camera bag or luggage. It’s quite cheap. For example, the two-and-a-half-mile trip from my apartment to the gym on a motorbike is about $1.25.”

Michael also enjoys several entertainment and leisure activities. “A theater ticket at Salon Saigon (a small contemporary art space) can be as little as $8,” he says. “I attend a lot of gallery openings, which are free, and I’m constantly on the lookout for venues to display my work.”

Vietnamese people have a reputation as being friendly and welcoming and having a cheeky sense of humor. “I’ve been able to integrate myself into society fairly seamlessly and don’t feel like an outsider at all,” he says. “At this stage, I’ve been living here for two years and nine months and feel quite comfortable and safe. I’ve found that if you treat people respectfully they’ll almost always reciprocate.”

Getting ill is part and parcel of getting older for anyone of retirement age. “Fortunately, I’m very health-conscious and take good care of myself,” Michael says. “I’ve only had one doctor’s visit since moving here, so I pay out of pocket. Based on my own experiences and those related to me by my friends, healthcare is quite good in HCMC. There are a number of clinics staffed by Western-trained personnel, and there are many other places offering traditional Eastern therapies,” he explains.

I have much more disposable income.

“Many medications that are prescription-only in the U.S., such as antibiotics, are available over-the-counter here. If I have a minor ailment, I can go online to check my symptoms and treat myself accordingly,” Michael explains. “I have much more disposable income and much less stress having left the daily grind of working behind. I’m more relaxed now than at any other point in my life.”

Michael continues to exhibit and sell his photographs to help fund his retirement. “I have also been doing slide presentations at various venues around the city and have been approached by a few galleries, so I’ll be doing print exhibitions in the coming year.”

Nowadays, he espouses the benefits of retiring in Vietnam to anyone who’ll listen. “The people are friendly and helpful. The infrastructure is pretty good, so it’s easy to get around, and the food is delicious, plentiful, and cheap,” he says, giving a nod to Vietnam’s world-famous cuisine. “Vietnam’s close proximity to the rest of Asia, Australia, and New Zealand is an added benefit. And personally, as a photographer, this is a very rich visual environment.”

Expat Diary: What is Life Like in Vietnam During Lockdown?