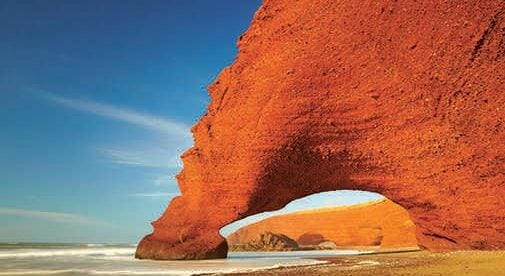 Where the Sahara meets the sea—David’s journey will take him to Morocco, and onward from there. ©SilverJohn/iStock

“So, what do you do?” It was a question I heard often as I traveled solo around Europe at the tender age of 19, many moons ago.

“I’m a security guard, but I plan to become a private investigator soon,” I’d explain, enthusiastically.

My response was most often met with puzzled, “that’s-not-what-I-asked,” expressions. I gradually learned that the locals couldn’t care less about what job I took to pay the bills. They wanted to know what brought me joy, what I did for fun, what really cranked my chain.

“I climb mountains,” proclaimed one. “I hit the slopes in the winter, and race my bike in the summer,” said another. “I wrestle alligators,” explained a fellow adventurer. (Well, not really, but it helps deliver the point.)

That simple, awkward question taught me a valuable lesson about life, very early on: What you do to make a living matters a lot less than the fun you’re having along the way.

Bit by the Travel Bug

I caught the travel bug early, inspired by both my father, who was a scholarly, conservative travel agent, and my uncle, who was a globetrotting, philandering hippie. They were as different as night and day, but the two brothers shared a passion nonetheless. I was lucky to inherit it.

After graduating from college, still a teenager, I backpacked through Ireland, France, Holland, Luxembourg, Italy, Greece, Belgium, and England. Hitchhiking, riding the rails, bicycling, and hopping on ferries.

I learned a lot about art, and history, even more about life, and forged many friendships. I realized that the world was a big and beautiful place, its people incredibly diverse and interesting, and that there was still so much to explore and discover.

Yet what did I do? Like most, I returned home, launched my career, got married, signed a mortgage, had two kids, and so on and so forth. You know, the quintessential brass ring affectionately referred to by society’s brainwashed masses as the American Dream.

Don’t get me wrong, I love my kids and family with all my heart. But, inevitably, my new circumstances blasted like a shot of Raid at the travel bug that once consumed me.

My investigation agency took off. I became a much sought-after detective, cracking many high-profile cases. I found over 6,000 missing people, many of them abducted children; planted myself undercover in religious cults and biker gangs; exposed organized crime rings; foiled countless frauds and fake insurance claims, and even caught a few wayward spouses during my three decades in the trenches.

I wrote a couple of bestselling true crime books. Although well-reviewed, rather than continue to write about serial killers and psychopaths, I wanted to focus on more uplifting and inspiring topics. Like travel.

It was as I approached the 15th round of a grueling four-year custody battle back in 2013, that destiny walked through my door. Well, not actually my door. It was the door of my local bagel shop, where I had started my day for almost 15 years.

Her name was Beverley. Although much younger than I, her expressive eyes and hypnotizing smile both bedazzled and captivated me—almost as much as her youthful vigor and zest for life. She brought out the adventurous little boy in me that had gone missing in action sometime before.

Through our frequent coffee shop “dates,” I learned that Beverley had a passion for travel and adventure that rivaled my own. After our first official date, mountain biking through a national park, I realized I had found my true soulmate.

Beverley and I fell madly in love. A few years later I proposed to her in front of the bagel shop where we had first met, which had since sadly gone out of business.

For eight years, she joined me in raising my son into a great young man. All the while we dreamt of exploring the world together some day, abandoning all remaining responsibilities, and living a healthier life.

We fantasized of somewhere tropical, where we didn’t have to battle winter six months a year. No more lawn mowing, leaf raking, and endless snow shoveling. Scrap the fast food lifestyle and get back to sit down, home-cooked meals. Maybe get off my blood pressure meds, and break my addiction to ZzzQuil too.

Like you, maybe, we said we’d start the search “some day soon.” But, unfortunately, “some day” and “one day” are highly subjective goals. They often translate to “never.” Last year, on April 24, 2020 to be exact, that fact became clear as spring water.

My “Hit by a Car” Moment—Literally

As I crossed the street on a green light, a speeding car careened around the corner and struck me. I was put into an induced coma and awoke a week later, after several life-saving surgeries. All in the middle of a global pandemic.

Thirty years of tracking and fighting criminals as a private investigator with countless pursuits and engagements, and I was almost snuffed out by a distracted teenage driver while crossing the road.

I left the hospital a month later, 70 pounds less than the strapping 230 pounds I weighed before. It would take months of physical therapy, home nursing, workouts, and yet another operation to return to my former glory.

I promised myself—and Beverley—not to wait any longer to start searching for that better life. I had been given another chance to pursue my dreams.

Beverley and I began planning our launch. I had prepared over the years by creating alternative streams of passive income— developing online training courses, maintaining Florida rental properties, and doing freelance writing on sites such as Upwork—but we’d still need to budget our money carefully to live a comfortable roving retirement. We could housesit, said my wife. Offer home exchanges. Teach online English courses. Whatever it took to satisfy our wanderlust and find our personal paradise…wherever it happened to be.

That’s when destiny struck again. Except this time it didn’t walk through the door. It arrived in the mail.

We were reading the March issue of International Living over our morning coffee when an ad seeking a new writer—a “Gumshoe in Paradise,” no less—jumped from its pages.

The opportunity couldn’t have been more serendipitous. So here I am, dear reader, your new “Gumshoe in Paradise.” I invite you to join us as we wander the world in search of Shangri-La, using my detective skills to find fun and adventure, along with the perfect place to live.

I’ll use the critical thinking and problem-solving skills I’ve acquired over the years, along with my investigator’s sixth sense—the ability to act as a natural born lie detector.

I’ll enjoy trading serial killers for boa constrictors…I hope! Maybe you’ll catch me lurking in the corner of some tropical bar, sporting my leather fedora and typing on my beat-up laptop.

At least now, when I look in the rearview mirror, I have a perfect answer to that introspective question that Europeans so often posed to me as a youth.

“I travel the world in search of adventure, greater knowledge, and my own personal paradise—with the woman of my dreams at my side.” That’s what I do!

Follow David and Beverley’s adventures here. Get David’s tips and tricks for doing scouting trips on a budget. With his detective’s eye, he’ll show you how to make the most out of every location you visit, when you’re looking for your own retirement paradise. Stay tuned.

Countries with the Best Healthcare in the World