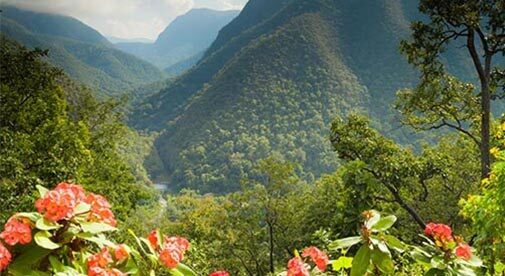 There’s more to Thailand than tropical beaches. Its mountains and forests are heavenly too. © Edenexposed/iStock

“I had to learn to work with bamboo, which is incredible stuff. But when you come from the Western construction world, you have to shift your practices and expectations. Bamboo takes a lot of patience,” says Felix Bourdouxe, looking out at the deep-green mountains stretching to the horizon—the view from his home in northwestern Thailand.

On any given weekend the five acres of Tong Pa Pum Kids Camp are busy with a horde of children building, baking, digging, and, in general, running amok as Felix and his partner, Ruan Chatanaran, stand by all smiles.

“This is what we work for,” Felix says, taking a break from the bamboo and gesturing to the kids who range in age from 8 to 12. The children are all members of hill tribe families who live mostly along the borders of Thailand. Most are stateless and considered at risk. “Many of these kids live in UN-managed refugee camps that have been in existence for three or four generations. They don’t have many opportunities to get out and just have some fun.”

Felix and Ruan have run their own camp for almost 10 years. They bought the land and built almost everything on it themselves, including the massive open-air kitchen where kids learn to bake bread and pizza in a brick oven and pedal stationary bikes that generate electricity. “Our goal is for the kids to come here, have fun, but also learn. We have little stations to do small projects like tie-dye shirts, but also team building days when the kids build bamboo rafts and take them down the river,” Ruan says.

Bamboo lean-tos are pitched around the property with tents set up in them for the almost 50 kids and eight volunteers who visit over the weekend. Felix and Ruan live in a suite of lofted rooms above the open-air kitchen, a high vantage point that looks over the property, with a clear view of the mountains which make up the border with Myanmar in the distance.

Felix, originally from Quebec, Canada, met Ruan about 14 years ago when he was on break from working on an oil rig and she was traveling with a troupe of performers. “I had always changed jobs, being kind of a jack of all trades; I like to think I can build and or fix just about anything. When Ruan and I got together she told me about her plan to start a camp for kids, and I thought it sounded like fun, and a good cause, but of course, a lot of work, too,” Felix says.

Born and raised in Bangkok, Ruan was a graduate of one of the top universities in Thailand and was on track to becoming a lawyer when she decided to take a year off and travel with a group of performers as a fire juggler. “We performed for tourists in order to make money so we could perform for children in poor areas. I soon knew that working with kids is what I want to do for the rest of my life. I met Felix and could see that he and I could make the camp happen,” Ruan says.

They bought the property for about 1.5 million baht (about $46,000) with money they pooled together from their own savings, augmented by the first charitable donations to the organization they set up to fund the camp. They also bought a 16-passenger mini-van that serves the dual purpose of transporting guests and volunteers as well as materials and supplies for the camp.

It took Ruan two years to get the camp and organization up and running. In the meantime, Felix continued to work on rigs, doing four weeks on-rig and four weeks off, when he would work on the camp property. “There was a lot of bush to clear out, planting to be done, buildings to go up. It takes patience.”

“The organization’s finances are complicated; we have an accountant that I work with to handle it. But our personal finances are very simple. We make very little and spend half of that,” Ruan says with a smile. In fact, Felix makes nothing. On the organization’s charter he is listed as a volunteer, which helps with his visa status in Thailand.

Figuring out Felix and Ruan’s exact cost of living in Thailand is complicated, as their lives are so tangled up with the camp. They pay no rent, and all upkeep for the property, the van, and their motorbikes is paid for by the organization. Ruan and Felix’s own budget is, basically, what they spend on food and entertainment.

In this part of Thailand there’s no need for central heating, and their open-air, outdoor lifestyle doesn’t call for air conditioning. As both of them are vegetarians and maintain a large and lush vegetable garden, they buy very little from the small town nearby. Felix and Ruan reckon that, between them, they spend a couple hundred dollars on themselves per month.

“About once a month we go into Bangkok and stock up on things like canned goods and supplies for baking or building. We usually spend the night and have a good meal. Four months ago we went to see a movie. Nightlife here is star gazing,” says Felix. “…and Netflix,” adds Ruan.

The Dos and Don’ts of Visiting Temples in Thailand

Rayong: One of Thailand’s Most Affluent Provinces