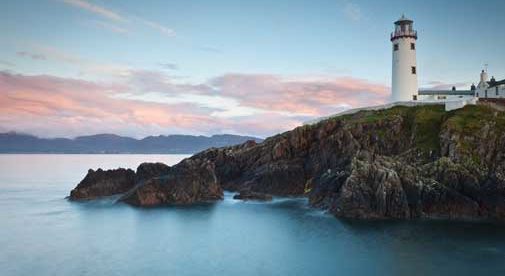 Having just arrived in Dublin, Ireland from the States, my husband, Jeff, and I had yet to figure out how to place a call. We asked an airport lounge employee for help, and she agreed with a welcoming Irish smile.

“Where are you calling?” she asked.

When she shared a laugh with a co-worker, we knew our adventure had begun.

Only a half-dozen communities in Ireland are known as Gaeltacht, where most of the people speak the Irish language daily. Everyone speaks English, but the schools teach in Irish, and place an emphasis on keeping traditional Irish music, dance, language, and culture alive. These small enclaves include only 2% of the country’s population, and County Donegal possesses the largest.

When we arrived in June, the locals welcomed a pair of overweight, over-aged Pennsylvanians as brave explorers. We are not of Irish descent and had never visited the island in the past. Not many North American visitors leave the south, and County Donegal fills the northwest corner of Ireland. Sharing more border with Northern Ireland, than land connection to the rest of the country, the area is geographically isolated.

The people in Ireland are famously social. They gather to watch Gaelic football on television, to chat, to wander, and to drink. Our first night in Donegal, locals invited us to a whiskey tasting party. A new distillery had opened and they wished our opinion (spoiler alert: it packs a punch). Evenings bring shared pints at the pub, conversations with a famous local author, nightly music, and our embarrassing attempts at traditional Irish dancing, encouraged by lifelong high-steppers.

Most days involve a light rain, which bothers us less than we imagined it might. The climate here avoids extremes. Summer temperatures rarely break 70 F in the afternoon, and winter is mild compared to the U.S., with snow seen only on mountaintops. We celebrate sunny days for the blessings they are.

A two-bedroom apartment costs from $590 a month in the center of Donegal town. A family can rent a three-bedroom home for that in more rural areas.

Groceries and utilities run 10 to 15% lower than we were accustomed to paying in the States, and buying local products brings the final tally lower. $2,500 a month provides a comfortable life that involves numerous nights out on the town.

Most recreation remains free. People here love hillwalking, and are capable of clambering around for multiple hours at the end of a long day for relaxation. Ireland also possesses some of the most beautiful beaches in the world. The water is too cold for swimming, but the views can arrest a person for hours. The imposing peak of Donegal’s Mount Errigal can be seen for miles around on a clear day, and off-shore islands lie along the horizon like sleeping giants.

There are no trains that come further North than Sligo, but Donegal boasts a small airport. Buses run every day and provide a scenic journey up from the cities of the south. The taxi driver will give you his cell number, but we recommend a car for daily life in this beautiful remote area.

When contemplating a relocation to Ireland, consider a visit to overlooked County Donegal. The prices here are lower than in the more populous southern counties, and the lack of tourism has preserved traditional culture and a way of life that locals are anxious to share.