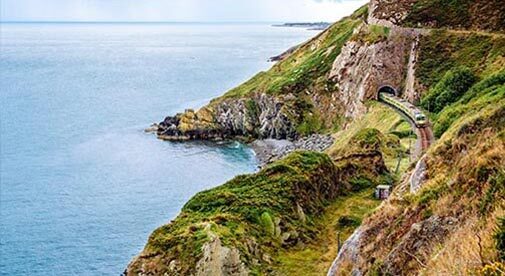 Miles of single-track railway burrow through and along the coastal cliffs of Wicklow. ©David Kalisinski/Dreamstime.com.

There’s something exciting about a railway line running along a seashore that takes me back to my childhood. It reminds me of long summer holidays in seaside towns, wide beaches, exciting novelty stalls, pink and white candyfloss, musical ice cream vans, washed-out sea shells, and knee-deep waves crashing onto the shore.

The 85-mile journey from Rosslare—a seaport linking Ireland to Britain and mainland Europe—to Bray, just south of Dublin, takes about three hours. That the train is described as an “express” is a delightful irony. But never mind the time involved, the journey itself on a warm cloudless day is a pleasing vision of constantly changing panoramas: small country towns, numinous woods and rolling pastures, towering church spires and ancient bridges, lazily flowing rivers, and wide sandy estuaries.

Five minutes after leaving the harbor bang on schedule, the train makes its first stop at Rosslare Strand, a small seaside village in “The Sunny South East” which enjoys 300 hours more sunshine than anywhere else in Ireland. It’s also home to Kelly’s Resort Hotel & Spa, a busy 4-star establishment that has catered to families and holidaymakers for well over a century. Its friendly staff more than fulfill the traditional Irish greeting, céad míle fáilte—a hundred thousand welcomes.

Traveling on another eight miles, the train arrives at Wexford Harbour, which lies at the mouth of the River Slaney. Now I understand why the journey takes so long. The train glides to a halt on the quayside alongside heaped fishing nets, lobster pots, and mussel trawlers. This is a busy working dock, and the pungent smell of fresh-caught fish hangs heavily in the air as we roll alongside at a safe, slow rate.

Then it’s on again to Gorey. Hugging the coast, I look out across the Irish sea toward north Wales. Its highest mountain, Snowdon, lies just out of sight over the horizon, though sometimes, its lofty peak can be seen. A small inland market town, Gorey has a smattering of shops, two small hotels, along with restaurants and coffee shops. Courtown, a small holiday village well worth a visit, lies on the coast almost four miles to the east.

Twenty minutes later, we arrive at Arklow. This is a medium-sized town standing on the banks of the River Avoca. Once one of the busiest ports in Ireland, a small fleet of fishing boats is tied up at the quay. The town used to be a major center for the boat-building industry, but all that is gone now. Instead, the town offers coffee shops, a lavender farm, a leisure center, restaurants, and an authentic Victorian tea room.

Next is the busy town of Wicklow, a commercial fishing port standing on the River Vartry. On Thursdays and Saturdays, a thriving and lively fish market operates on the quayside. Of particular interest, if you have time, is a visit to Wicklow’s historic jail. Described as “Ireland’s best interactive jail museum,” it provides an unforgettable journey through the original prison building telling the stories of the men, women, and children imprisoned here under British rule. It’s a must-see.

Leaving Wicklow town, the train heads back to the coast. The pebbled beach and grey-green sea are on the right; on the left, an open section of marshland that constitutes the East Coast Wetlands and Nature Reserve. Here, depending on the season, an assortment of different birds can be spotted: little egrets, kingfishers, Greenland white-fronted geese, and whooper swans among them.

Away to the west across the marshland, the rolling green hills of County Wicklow fill the horizon. To the north stand the twin peaks of the Great Sugarloaf Mountain and the Little Sugarloaf—gateposts to Wicklow, The Garden of Ireland.

Then it’s on to Greystones, looking out across the Irish Sea. Named after the half-mile stretch of grey stones between its two beaches, the town has its own harbor, several delightful coffee shops, and excellent restaurants.

But the jewel in the crown lies in the next, and final, section of the journey: Greystones to Bray. The line is cut into the side of the almost 800-foot-high Bray Head cliff—three-and-a-half miles of single track. For much of the trip, the track runs right along the rock edge. This has to be one of the most beautiful railway journeys on earth.

Looking down sheer cliffs to the coves, perhaps 100 feet below, I watch grey seals playing and cavorting in translucent blue water; surf crashing on the stony shore; gulls wheeling, diving, and calling each other among the craggy rocks. But in a moment the scene vanishes as we rush headlong into the inky darkness of a tunnel. Moments later we emerge into blinding sunlight, and another cove appears, this one even more impressive than the last. It is covered down to the sea by swathes of flowering yellow gorse and shoulder-high ferns. Again, the train runs into a pitch-black tunnel only to explode into blinding daylight and another spectacular view.

All too quickly the train descends from its rocky voyage leaning into a left-hand curve. This brings Bray and its long sweeping bay into panoramic view. My final destination. This was not just a pleasant journey, but a wonderful experience in a beautiful part of the world that I would happily repeat.

Things to do in Wicklow, Ireland

Things To Do In Belfast, Northern Ireland