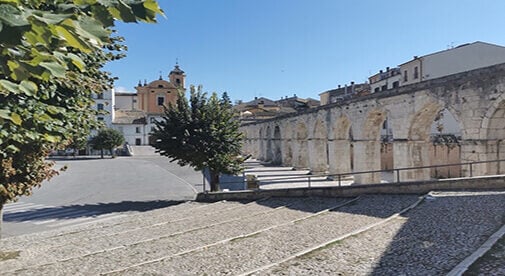 Crossing the Apennines about two hours east of Rome, I arrive in the town of Sulmona.

Digging deep into a real estate market takes boots on the ground and rubber on the road.

It’s a philosophy I live by. And one that I’ve imparted to my team.

As General George S. Patton said, “No good decision was ever made in a swivel chair.”

That’s why me and my scouts have been on the road for the last few months, traveling hundreds of miles and looking at countless numbers of properties across Italy.

Some looked good on paper but didn’t stack up in person. Others turned out to be killer overlooked opportunities…rare finds we would have missed if cooped up in an office.

My scout Paul has ditched his desk and is currently scouting Europe for bargains. He recently made his way up the Apennines in Italy, that vast mountain range that gives the Italian peninsula its spine.

The Art of the Hunt

Is this the place where it all went wrong for Italy?

I’m standing in a piazza in the town of Sulmona in Abruzzo. Around me are buildings the color of latté, with low pitched roofs and shallow balconies. A Gothic church tower peeks into view on one end of the square. And in the center stands a single statue. A man who perhaps holds more responsibility for the fall of the Roman Empire than anyone else.

He’s not an emperor or a general…

He’s the great Latin poet, Ovid. The man who turned Italy from a nation of empire builders into a nation of lovers.

He literally wrote the handbook on how to seduce, deceive, and make love. And so threatening were his ideas, the first Roman emperor, Caesar Augustus, banished him to live out his days in an obscure outpost in modern day Romania.

However, the damage had already been done. And it began here in Sulmona in the region of Abruzzo, Ovid’s birthplace.

In this small historic city, high up in the Apennines, his legacy lives on.

The flaneurs and loungers Ovid brought to life in his collection of poems, The Art of Love, still cruise the streets. They gather in the taverns, the pizzerias, the cafés, the trattorias. They’re the teenagers dressed all in black on the church steps. They’re the old couple strolling back and forth across the piazza in link arm, like a private search party that found what they were looking for long ago.

Ovid invented the Italian art of pleasurable pursuits, but in Sulmona the artform has slowed and matured.

This is a very different place to the Italian capital, where I set out from just two hours before. Up here, life moves at a snail’s pace.

Upon arrival, the town was virtually empty, with the exception of a couple of bewildered French tourists and me. If it weren’t for some radio music seeping out from a high window, I could have been convinced that everyone had just up and left. I subsequently learned that it was lunch time and for two hours all the locals had gone home to eat and nap.

The perfect time to whip out the smartphone and Italy’s real estate apps and see what kind of bargains I could find.

Right away I strike gold…

The best view in town is for sale. It’s overlooking the large town square, Piazza Garibaldi, with stunning views of the Apennine mountains beyond.

This is a special place to live. During the Middle Ages, while ruled by Neapolitan kings, it was the cultural, economic, and social center of the region. To this day, the square holds a jousting festival each summer. And every Wednesday and Saturday, there’s a large open-air market.

The two-bedroom apartment is large at about 1,399 square feet and has three balconies open out to the square. Prime Airbnb location—though I wouldn’t expect high occupancy in a third-tier Italian city. (I paid about €70 a night for a one-bed apartment without any view.)

There’s a 13th-century aqueduct built by the German emperor Frederick II right in front. And it’s just steps from where George Clooney shot an iconic scene in the film The American in 2010.

Italian banks will lend 60% of the value of a property to an American, at fixed rates of around 1.4%. So, you could own this piazza apartment for about $400 a month.

Abruzzo is known as “the green lung of Italy” and it’s one of the greenest regions in Europe, with almost half of its territory designated as national parks and nature reserves. The surrounding mountains are home to wolves, golden eagles, and brown bears.

It’s a place for nature lovers and outdoor sports enthusiasts. Hiking trails crisscross the mountains, often finishing at abandoned churches. The roads are busy with cyclists. In winter, there are a number of ski resorts to enjoy. And from Sulmona you can be on the beaches of the Adriatic in just 50 minutes.

Because of the altitude (Sulmona is at about 1,300 feet), it’s a lot cooler than the coast, or indeed Rome. Winters get snow, but it very rarely causes any access issues. This time of year, temperatures can still be in the 80s F.

Sulmona was built on the bed of dried lake, so the historic center is remarkably flat and easy to get around. Only residents can drive in this area, so it’s semi-pedestrianized too.

Right at the edge of the historic center I came across a three-bedroom apartment for €65,000 that looks in pretty good shape. It offers a balcony, as well as a cellar and a terrace with a wood oven and comes move-in ready.

I meet a local real estate agent to show me more. We hop in her convertible and drive five minutes from town.

She brings me to a two-bedroom villa with stunning mountain views. Right from the back of the house you make out a 13th-century hermitage etched into the mountainside. It was once the dwelling of a monk named Pietro Angelerio, who later became Pope Celestine V.

The owner shows me around. There’s half an acre of land where she used to raise goats. A small orchard of plums, pomegranates, and apples. She tells me the vines overhanging the lean-to are ripe and ready to harvest (she makes her own wine).

The reason she’s selling is because her husband has passed on and she’s moving back to her family in the U.K. The property is going for €260,000, but she made it clear she’d consider all offers.

VIDEO: Get Paid to Live in This Italian Village