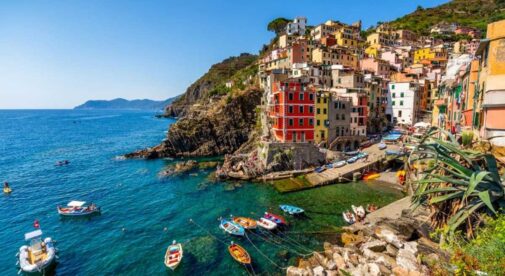 The village of Riomaggiore. ©iStock/Eloi_Omella

For centuries, the Cinque Terre (five lands) were five fishing villages clinging to the rugged Ligurian coast of northwest Italy. Documents from the 11th century mention the Cinque Terre, with Monterosso and Vernazza being the first two established villages. Corniglia, Manarolo, and Riomaggiore followed, and the five towns grew under the rule of the Republic of Genoa until Italian unification in the 19th century.

Because of their cliffside location, the villages were always difficult to access. The Italian government built a rail line to connect Genoa and Rome, and it passed through the villages allowing access to them. A high coastal road exists and offers great views of the sea; note, though, that driving in most of the towns is not possible.

In the 1970s, a travel writer mentioned his love of the villages in one of his books, and travelers have been flocking to the towns in increasing numbers since then. In 1997, the Cinque Terre became a UNESCO World Heritage Site. The founding of the Cinque Terre National Park two years later has helped the area maintain its environmental beauty and protect its marine life. The park adheres to the European Charter of Sustainable Tourism which prioritizes land management and the historical identity of each of the villages and their inhabitants.

1. Getting to Cinque Terre

Driving to the Cinque Terre in your own car is difficult as you cannot drive into most of the villages. The best option is to park your car in one of the larger towns nearby and take the train. It will save you a headache and a large fine if you drive into one of the limited traffic areas.

Traveling by train between the villages is your best option. From Genoa, take the train towards La Spezia and hop off at one of the villages. From La Spezia, take the Cinque Terre Express. The trains run frequently, and it takes an average of five minutes to travel from one village to the next one.

Once you get to the Cinque Terre, there are many things to occupy your day in each village and the park. If your time there is limited, plan your day accordingly.

2. Hike Between the Towns

There are more than 75-miles of trails in the Cinque Terre National Park. Most of the 48 trails are free to hike, but should you want to go from Monterosso to Vernazza or Vernazza to Corniglia, you will need the Cinque Terre Card. The paths may include stairways, stone bridges, and a variety of vegetation. Some will take you through vineyards, orchards, olive groves, and meadows full of flowers, while all offer a spectacular view over the Mediterranean Sea.

A landslide forced the closing of one of the hiking paths, Via Dell’Amore (Lovers’ Lane), a few years ago. The popular path which connects Riomaggiore to Manarolo should reopen in 2022. The 1.5-kilometer stretch winds along the coast in a path excavated from rock during the building of the railway. Even though this part of the path is closed, you can still walk between the towns on a steeper (and higher) path.

My favorite way to travel between four of the towns is to take the ferry. (Note: The ferries do not stop at Corniglia as it is the only town without sea access.) You have the option of buying a ticket for just the Cinque Terre or for a ferry that will connect you also with Portovenere to the south and Levanto to the north. Tickets are valid only for one day, but they include hop-on, hop-off access. Keep in mind that the ferries do not run in bad weather and that the time schedule changes in some seasons.

Even more fun and personal than the ferry is a boat tour from one of the villages. There are several companies offering charters and tours, so be sure to check one out if you are interested in a more intimate experience on the water.

Cinque Terre dal Mare offers several types of boats with drivers, and they have both private and group tours. In addition, they offer a three-hour photography course which will take you to spots not usually accessible by other boats. You can also plan a custom experience with them.

4. Rent a Kayak Boat or Canoe

If you’re really adventurous and want to get right down to sea level, you can rent a kayak along the coast. You can rent single and double kayaks, boats, or canoes in most of the towns along the water. You can also reserve a kayak online if you’re so inclined. If you’d rather not go out on your own, check out the companies such as Viator and Airbnb, which offer guided kayak tours from the towns.

5. Dive into the Sea

While the crystal blue waters of the sea entice water lovers to the Cinque Terre coast, Monterosso al Mare is the only village that has a real beach. The public beach at Monterosso is free, but to get a prime spot, plop your towel down early. Should you want a little shade, you can splurge on a chair and umbrella at any of the bathing establishments on the beach.

The fact that the other towns don’t have sandy beaches doesn’t stop swimmers from indulging on their rocky coasts. Should you be adventurous, you can dive from the coastal rocks near Vernazza, Manarolo, and Riomaggiore. Or, you can join the dozens of others who spread towels on the huge boulders and sunbathe.

There were castles in the towns of the Cinque Terre, and today some of the ruins still exist. Built for defensive purposes in the 13th century, the castle near Riomaggiore is today a conference center. Also built around that time was the castle in Manarolo, but only ruins remain between the colorful houses of the town. In Monterosso, the Genovese-built Aurora Tower divides the old and new town. It is a private house and part restaurant today.

In Venazza, you’ll find Castello Doria on a promontory above the town and sea. I’m not going to lie and tell you the climb up there is easy. If you trek up the town’s streets, though, the views of the Mediterranean and surrounding countryside are a great reward. If your legs can take a few more steps, pay two euros and climb the tower.

7. Walk the Streets of Cinque Terre

There is nothing I like more than walking the narrow streets of the five towns and just enjoying the atmosphere. Again, I’m not going to lie and say that the walks are easy. The streets in the main part of town are often crowded with tourists, and the side streets consist of stairs (many of which are made of stones).

Once you are out of the area where most tourists congregate, you’ll be able to listen to the chatter and clatter of the people who call Vernazza or Manarolo or one other the other towns home. You might even smell someone’s lunch cooking or find a hidden gallery or store.

There is no doubt that the restaurants of the Cinque Terre are geared towards tourists. That doesn’t mean that the food is all bad, though. I’ve been to the Cinque Terre four or five times, and I’ve not had a bad meal yet.

If you’re looking for lunch (or dinner) with a fantastic view, Ristorante Belforte in Venazza is a good place to start. Located on several levels with different views of the sea, Belforte specializes in dishes made from fresh fish. For those who do not like fish (yours truly), the 50-plus-year-old restaurant offers pastas and fresh vegetables grown locally.

Nessun Dorma, located in Manarolo, is famous for its view over the sea. You’re not going to find pasta and pizza at Nessun Dorma, but you can enjoy good wine, great meats and cheese platters, Italian Bruschetta, and handmade pesto. You can even learn how to make pesto from them. Be sure to visit their wine cellar that dates back to the 9th century.

There are dozens of restaurants spread between the five towns, so it is always best to look around to see which offers something you want.

Before I left for the Cinque Terre on my second visit there, my friend and sommelier Giovanni told me to be sure to check out the local wine, Sciacchetrà. “It’s expensive,” he advised me, “but very good.” He was right.

Sciacchetrà is a dessert wine that pairs well with spicy cheeses and hardy desserts. Its production is limited because the Bosco, Vermentino, and Albarola grapes that make it wither on shaded vines to concentrate the sugars. The longer it ages—and it can stay up to 25 years—the better it gets.

The colorful towns of the Cinque Terre are magical and worth a visit. If you are planning to go for just one day, don’t try to rush through all five towns. Check out the official Cinque Terre website and decide what you want to see and do most. Choose one or two of the towns and spend the day there.

The Cinque Terre site also includes up-to-date information on closures and events, bus schedules, park guides and maps, and more. You can also find a lot of information on weather, boat tours, beaches, hotels, hiking trails, the trains, and more through the EU’s Cinque Terre site. That site also has webcams in all five of the towns, so you can enjoy the beauty of each vicariously while home.