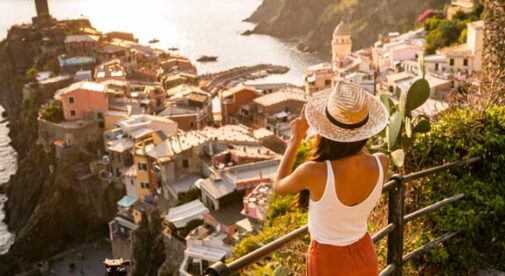 According to the U.N. and Global Peace Index, Italy is ranked 30th to 35th safest country in the world, well ahead of the U.S.

There are multiple expat communities in Italy from Rome (Lazio) to Milan, Florence, Apulia, Sicily, Tuscany, and Abruzzo, to name a few. In many of these places, additional expat services exist to make assimilating into life in Italy easier.

Expats can feel safe in Italy, especially in the smaller towns and the multiple expat communities in the larger, internationally known tourist areas.

Is it Safe to Travel in Italy Right Now?

It is very safe to travel in Italy right now. Travel is picking up significantly after COVID-19. Italy does not require a Green Pass, vaccination certificate, or negative swab to enter the country and there are no quarantine restrictions at this time. Restaurants, public transportation, bars, and clubs no longer require the use of masks.

Note: Hospitals and care facilities do require you to wear a face mask. If you are visiting a friend in a hospital or a care facility you may be asked for a 48-hour rapid COVID-19 test.

Italy sees few muggings, and never with a weapon. According to the national statistics agency, in 2019 Italy had 315 homicides, that’s the same for an average American city.

Areas to Avoid in Italy

As a general rule, Italy is considered one of the safest countries in the world to travel in. The city with the highest crime rate in Italy is Milan. The tourist spots in larger cities are carefully patrolled, but petty crime, (pickpockets, purse snatching, etc.) can be a problem—like in any big city.  Keep your hand on your purse, wear the strap over your head and shoulder and keep your wallet in your front pocket, in a money belt, or in a fanny pack worn in front.

Don’t make a flashy show of jewelry, watches, or money any more than you would while traveling in any strange place. Use common sense, stay in tourist areas, with tour groups, or in smaller towns and you will be fine.

Precautions for Women Travelers in Italy

With an excellent public transport system and plenty of world-class attractions, Italy is a safe destination for women traveling alone or in groups.

As with any tourist destination, keep your hands on your bag and over your shoulder, or keep your valuables elsewhere on your person. Be careful of your valuables in train stations, bus depots, or crowded markets, and always at night. Make sure you have a phone with an international SIM card and that you know the local emergency numbers. Using group tours private or public is a wonderful way to see the sights and stay safe.

Italy is a safe place for single women to travel. Italian men are known to be flirtatious. It is not uncommon for a lady to hear “Ciao Bella”(Hello Beautiful). Just ignore the comment and walk on.  Again, using common sense, staying in tourist areas or with tours is not only a good way to see the places you want to see, but also a great way to meet other travelers, many of whom will speak English.

Incidents of violent crime are much lower in Italy than in the U.S, but petty theft is common.  Again, common sense will solve most of your concerns: stay in groups, stay in tourist areas, ask the locals what areas are safe, and which are not! (You will be surprised at how many Italians speak some or even a lot of English.) The concierge at your hotel will often be able to give you pointers on where to go and what to do safely.

Always know the phone number and address of the local police, and the U.S. Consulate or Embassy.

Italy has more crime at night, and more crime of a non-violent nature than in the U.S. Pickpockets, boosters, purse snatchings and the like tend to occur when individuals don’t take ordinary precautions to protect themselves.

Many cities including Rome, Florence, and Venice have nighttime walking tours along lighted streets where you will find police patrols on a regular basis. From personal experience walking in Venice and Rome in the early, early morning has never been a problem.  We make a concerted effort not to dress, or act like tourists.

Italy has an excellent public railway and bus system. These systems are generally easy to use. In many places, announcements are in English and Italian. However, there is one quirk you need to be aware of. When you have gotten your paper ticket, make sure you get it validated (punched and time stamped) before you get on the train or bus. There are multiple time stamping machines (validation machines), available at bus and train stations. Failure to do this doubles the cost of the ticket which must then be repurchased in transit and can produce an additional fine.

According to Italian driving laws you can use an international license as long as you are a tourist (90 days or less). You are supposed to get an Italian driver’s permit within one year of your arrival in Italy. It took me three-and-a-half years to get my Italian license, but I had no trouble using my valid international driver’s license during that time.

Car insurance is mandatory in Italy. If you are renting a car in Italy, it is wise to buy the best insurance cover you can afford.

All the road signs used in Italy are used throughout the EU. There are 153 signs particular to the EU which need to be learned to drive safely throughout Italy and the EU.

Electronic speed traps are common throughout Italy. Pay attention to speed rules. You can get a ticket up to two years after a violation.

There is no agreement for reciprocal recognition of drivers’ licenses between the U.S. and Italy. The exam (two parts, theoretical and practical) for your Italian license is in Italian and may not be taken in any other language.

Italy has an efficient, modern highway system that can easily be used throughout the entire country.

Is Drug Use Allowed in Italy?

The production, distribution, and sale of the following substances are illegal in Italy: heroin, cannabis derivatives (hashish and marijuana), cocaine, hallucinogens, ecstasy, and similar products. Bringing these substances into the country is a no-no (6 to 20 years in jail and a large fine.) However, some substances purchased in the country are ok for personal use especially if prescribed. Recreational use of marijuana is permitted, and you can buy the plants (up to three) in many garden stores in the spring. Cannabis is sold in most Tobaccherias throughout the country specifically for personal use.

Is Prostitution Legal in Italy?

Prostitution in Italy is legal. It is defined as the exchange of sexual acts for money. Organized prostitution (brothels), controlled by third parties are illegal, though.

The Mediterranean Sea is considered one of the safest seas in the world. With calmer waters and weaker currents “The Med” is much more amenable and safer for relaxed bathing than either the Atlantic around Portugal, France’s west coast, or the Pacific beaches of Costa Rica.

Some of the clearest water and most beautiful beaches in the world can be found in southern Italy on the Adriatic and Mediterranean coast or in Sicily and Sardinia.

Most public beaches fly flags to warn people of dangerous conditions but do not have lifeguards.

Same-sex civil unions were legalized in 2016, gay people serve in the military, and Italy was the third nation to recognize one’s right to change gender, back in 1982. Same-sex activity was legalized in 1890. Gay rights groups and public campaigns have raised awareness and tolerance, and more pride marches are organized every year, even in smaller provincial cities. Data shows public opinion has continually grown more positive in the past decade.

Italians are generally accepting and friendly and welcoming. There are some instances of anti-gay sentiment, and there have been a few violent episodes, but those are not widespread. Especially gay-friendly cities include Milan, Bologna, Rome, Naples, and Bari, though many smaller cities are accepting and tolerant, as well.  Puglia has a robust gay scene, especially Bari and Gallipoli. As with anything, stay aware of the situation and surroundings and call the authorities if you encounter threatening or potentially dangerous behavior. Gay rights groups will assist and intervene in the event of discrimination.