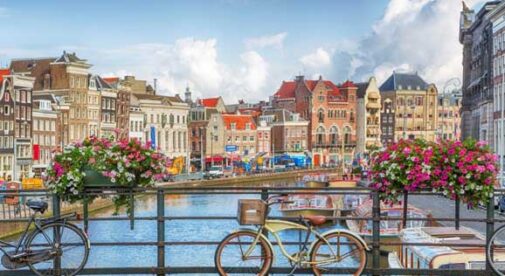 Called “Venice of the North” and known for its bike culture, Amsterdam is the capital of the Netherlands, a country of over 17 million people bordering Germany and Belgium. The city is a major airline hub, and if you are booking a trip to a European or Asian destination, you’ll often have the option to pass through Amsterdam. With its blend of bike paths, famous canals, world-class museums, and rich history, it’s a city worth exploring. Here are 10 things to see and do if you are lucky enough to visit Amsterdam.

1. Sail Down the Canals

It’s a little-known fact that Amsterdam is named for its canals but “Aeme Stelle Redamme” is medieval Dutch for “Dam in a Watery Area.” The city is actually built below sea level, and without its canals, it would be entirely submerged. With over 62 miles of canals and more than 1,500 bridges, these waterways are mesmerizing, and no trip to Amsterdam is complete without a canal ride down the UNESCO-recognized Canal District. You’ll have lots of sailing options with open and closed top boats, day and evening cruises, and some barges offering electric engines for a more peaceful journey. If a cruise feels too touristy, you can also hop on a ferry for a free experience to ride like a local.

Appeltaart (apple pie) is a thing in Amsterdam, so don’t leave without sampling this delicious dessert. With flaky crusts, whipped cream, and a sweet, tangy filling, you’ll see appeltaart on the menu in lots of cafes, bakeries, and restaurants throughout the city. Winkel 43 is a popular choice that offers great people watching in the Jordaan district, but my favorite apple pie can be found at Cafe Papeneiland, a charming brown cafe dating back to 1692.

3. Pedal Along the Bike Paths

With over 248 miles of bike paths, one of the first things you will notice in Amsterdam is that there are bikes everywhere. From grandmothers to toddlers, and from business people to artists, you’ll find all of the city pedaling along the paths. It’s tempting to imagine this is because the city is geographically small and flat, but if you read the history, you’ll find that car accidents in the 1970s re-ignited the bike culture. Today, there are as many bicycles as residents, so while visiting Amsterdam make sure to take a bike tour to have a local experience. The Yellow Bike Tour company is the most well-known, but you will find lots of options.

If you want to do some stylish shopping in quirky concept stores and elegant boutiques, wander over to De 9 Straatjes district in the center of Amsterdam. Located in the middle of the famous Canal Belt, De 9 Straatjes encompasses the four main canals (Singel, Herengracht, Keizersgracht, and Prinsengracht) and nine little streets in between. Here you’ll find a wide variety of shops, restaurants, bars, cafes, and art galleries. You can easily spend an afternoon exploring the stores, and with shops named All The Luck in the World, Pretty Things, and Things I Like I Love, you are sure to leave in a good mood.

5. Stroll Through the Red Light District

Prostitution is legal in the Netherlands, and De Wallen, also known as Amsterdam’s Red Light District, takes the world’s oldest profession to a whole new level by offering window brothels. Framed with signature red neon lights, there are over 200 window brothels situated along 17 alleys and streets. The Red Light District has become a tourist attraction in its own right and makes for an interesting stroll (but be warned, it is considered disrespectful to take pictures of the workers, so don’t do that!). The best way to see the Red Light District is on foot, and if you want an insider’s guide to this colorful neighborhood, the Prostitution Information Center (PIC) offers guided walking tours on specific days for anyone who wants to learn about the Red Light District from the perspective of a sex worker. Take this tour, and you will have cocktail party ice breakers for the next year.

With over 70 museums, Amsterdam has something for everyone. Art lovers will appreciate Museumplein, the Museum Quarter housing the Rijksmuseum (art featuring Dutch masters), Stedelijk Museum (modern art), and the Van Gogh Museum, all world-class galleries in their own right. If history is your thing, head to the Resistance Museum featuring Dutch resistance during World War II, and the Amsterdam Historical Museum. And for those seeking something a little quirkier, check out the Tulip Museum or the Cheese Museum complete with numerous free cheese samples.

The author of The Diary of Anne Frank hid from the Nazis during World War II in a location now called the Anne Frank House. Over a million visitors come each year to explore the Secret Annex and exhibitions like “A Room Full of Dreams” and “Reflections on Anne Frank.” Both emotionally powerful and educational, the site does a good job of illustrating individual lives and the sobering world events at the time. Located on the Prinsengracht canal in the center of Amsterdam, a visit takes between one and two hours. Be sure to get your tickets well in advance as this museum is often sold out.

Dating back to 1905 and home to over 260 stalls, the Albert Cuyp Markt in Amsterdam’s Latin Quarter (“de Pijp”) is one of the biggest open-air markets in Europe. Open from 9:30 a.m. to 5 p.m. Monday to Saturday, you’ll have lots of chances to take a stroll through this marketplace featuring fresh produce, specialty foods, clothing, accessories, and more.

Another open-air market is the Westerstraat market (also called the Noordermarkt), found in the Jordaan district every Monday from 9 a.m. to 2 p.m. With over 170 stands, this market has an emphasis on textiles and clothing and offers interesting shopping at competitive prices. If flea markets are your preference, head to the Waterlooplein Market near the Amstel river. Over 100 years old, this is the oldest flea market in the Netherlands and features second-hand and vintage clothing and trinkets, as well as a wide array of international food stands. This market is open Monday through Saturday from 9:30 a.m. to 6 p.m.

9. Place an Order at a Coffee Shop

Amsterdam has a worldwide reputation for its “coffee shops”—alcohol-free establishments where you can legally purchase cannabis. While cannabis might not be your thing, it is worth a trip to a coffee shop just to see what everyone is talking about. With its well-dressed and highly knowledgeable staff, Boerejongens aims to give a premium coffee shop experience, and you’ll often find a line of customers out the door waiting for their turn. Barney’s and Dampkring are also popular choices where you’ll get all the help you need to place your first order or just sip coffee and people watch.

Amsterdam has a conscience, and if you want to do good deeds, you’ll have lots of opportunities. Visit Crafted Stories in the Jordaan district, where all the products are fair trade and contribute to the independence and freedom of people from all around the world. From beach towels to bottles, and clothing to coffee, you’ll find something you love. A short walk down the street and you’ll find the LENA Fashion Library. Here you can explore a new angle on sustainability where you rent clothes instead of buying them. Inspired by old-school book libraries, this colorful shop with a cool vibe offers high-end brands and vintage clothing. And if supporting local musicians is your goal, head over to Dam Square for a wide array of buskers and street performers. If you see a performance you like, you can donate directly to these independent artists.

As you can see, the city of Amsterdam is complex—edgy and elegant, traditional and progressive, practical but visionary too. You’ll find a lot to love, and what might start as a layover could easily blossom into an extended holiday. But don’t believe me, come and visit for yourself!