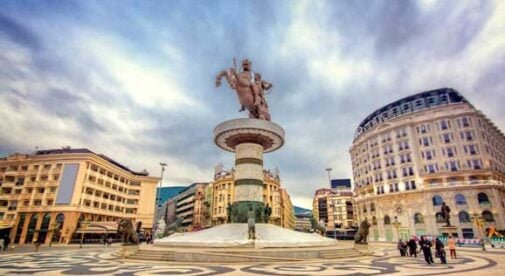 If you’re looking for a place that’s a bit off-the-beaten-track, where you are unlikely to run into large tour groups, consider a trip to Skopje (pronounced scope-ee-ah). One of the low-cost capitals in Europe, this quirky city offers visitors a wide range of attractions, from the Kale Fortress to the Mother Teresa Memorial House and from the Millennium Cross to the imposing “Warrior on a Horse” statue in the center of Macedonia Square.

An Overview of Skopje

Skopje is the capital city of the Republic of North Macedonia. The country was called FYROM (the former Yugoslav Republic of Macedonia) until the Prespa Agreement of 2018. It shares borders with Albania, Greece, Kosovo, Bulgaria, and Serbia.

It is one of the 11 countries in the Balkan peninsula, and with a total population of just over two million people, North Macedonian is striking in its diversity. About half of the population are ethnic Eastern Orthodox Macedonians, followed by ethnic Albanians and Turks, who follow the Muslim religion. You’ll see a mix of churches and mosques, shisha bars, and kafanas (traditional restaurants) side by side.

Skopje has an international airport (airport code SKP) offering flights from many major European countries. Train travel is another option, with the Skopje train station situated about a 15-minute walk from Macedonia Square in the center of the capital. Trains connect Skopje to Belgrade, Thessaloniki, Athens, and Ljubljana. Buses connect Skopje to other capital cities including Sofia, Tirana, Pristina, and Belgrade, to name a few.

Where to Stay in Skopje

There is a wide range of accommodation in Skopje, and you’ll have a choice between classic hotel chains, locally run Airbnbs, and pensions. For those who want the familiar, there’s a Marriott Hotel in the center of Macedonia Square. Skopje Apartments are lovely apartments run by a husband-wife team offering hospitality and comfortable accommodation. And this Airbnb is probably the coolest one in Skopje, run by Mirce and Yasmina, the owners of The Dude Specialty Coffee downstairs. You can have quality accommodation and amazing coffee all in one.

Be sure to stay at least a few days because Skopje has lots to offer. Below we offer nine things to see and do.

1. Count the Sculptures in the City Center

Skopje is the city of sculptures, and everywhere you turn, you’ll find interesting representations of people and animals scattered throughout the downtown. The backstory is that from 2010 to 2014, the government sponsored a project “Skopje 2014,” an initiative that included the installation of over 100 statues and sculptures throughout the city. The goal was to give the city an identity and help boost tourism. The project itself was quite controversial as the investment was hundreds of millions of dollars in a country where the median household salary is less than the equivalent of $2,500 per year. It’s difficult to gauge if the project was a success, but the outcome adds to the quirkiness of the city. A few popular statues to look out for include The Tree Man, The Roaring Lions, and The Bull. But by far the most famous is Warrior on a Horse.

2. Pay Homage to the Warrior on a Horse in Macedonia Square

The heart of Skopje is Macedonia Square and at the center of the square is a massive, eight-story-tall statue called “Warrior on a Horse.” Built in 2011 as part of the Skopje 2014 project, the statue is by far the biggest and most recognizable work of the initiative.

The square itself is a strange mix of old and modern, with digital billboards blasting mobile carrier ads alongside neoclassical-style architecture. The Skopje Marriott sits right on the square and the colorful lights of the hotel, and the surrounding national buildings, give it a festive, almost Las Vegas-type vibe. Make sure to visit at night to get the full effect. Some people find the square a bit too flashy and even kitsch, but personally, I find it entertaining and festive.

“Kale” means fortress in Turkish, and the Kale Fortress that sits over Skopje’s city center is a reminder that the Ottoman Empire occupied the country from the mid-14th century to 1912. The fortress itself offers little in the way of explanation, but tour guides are available at the entrance if you would like a curated tour. The fortress is an exposed structure, so early morning or late afternoon visits will help you avoid the beating sun. And if you can make it for sunset, you’ll be rewarded with a striking view of the Skopje cityscape.

4. Shop in the Old Bazaar

Another reminder of the diversity you’ll find in Skopje is the Old Bazaar, a colorful area with narrow, winding streets lined with shisha bars, tea houses, restaurants, bars, cafes, and street food stands. The Old Bazaar dates back to the 16th century when it was a trading center for the region. These days you’ll find rug shops, clothing stores, and souvenir shops. It’s characteristic of the country’s blend of east and west and well worth a visit.

5. Say a Prayer at the Mother Teresa Memorial House

It’s a little-known fact that Mother Teresa is from Skopje! The famous Catholic nun (1910-1997) has ethnic Albanian roots, but she was born in Skopje and lived there until she was 18 before going to Ireland and emigrating to India. The memorial house is built on the former Sacred Heart of Jesus Cathedral, where she was baptized as a child, and offers free admission to a photographic exhibition of her life. You can see everything in about 20 minutes, and it’s a nice homage to the nun who went on to become a saint. The building itself is an attraction and is part of why Skopje is sometimes described as kitsch. The official architectural style falls under the category of “eclecticism,” and words don’t do it justice. You’ll have to come and see for yourself.

6. Stroll Over the Art Bridge

There are lots of bridges in the center of Skopje, and one you don’t want to miss is the Art Bridge, a pedestrian bridge just off Macedonia Square that takes you across the Vardar River. With 29 statutes lining the walkway, the bridge is a tribute to famous Macedonian artists and musicians, including Lazar Ličenoski, one of the first Slavic impressionist painters, and Nikola Martinoski, one of the founders of contemporary Macedonian art. A stroll in the early evening is the perfect time to take in the romantic setting.

7. Take a Dip in Lake Ohrid

While the Republic of North Macedonia is a land-locked country, don’t think that you should leave your bathing suit at home. Dating back over four million years, Lake Ohrid is one of the oldest lakes in the world and lies 75 miles from Skopje. You can make the two-and-a-half-hour trip by bus or by private car. Once there, you’ll be rewarded with clean, fresh lake water, watersports, beach clubs, a charming old town with an international vibe, and lots of restaurants, cafes, and galleries. The town of Ohrid was declared a UNESCO World Heritage Site in 1980 and is one of the oldest human settlements in Europe. A dip in the lake and a stroll through the town make for a wonderful afternoon.

8. Have a Traditional Meal and Take in Live Music in the Bohemian District

Macedonian food is a fusion of Mediterranean and Middle Eastern cuisine, and the country is known for its tasty and full-flavored fruits and vegetables. Steer away from the tourist areas of Macedonia Square and take a 15-minute stroll to the Bohemian District in Debar Maalo. Here you’ll find a lively street offering amazing food in one of the many kafanas (traditional restaurants). Try Idadija M for one of the oldest kafanas in Skopje, or head to Skopski Merak for a more upscale kafana featuring live music.

9. Take a Cable Car to the Millennium Cross

When you look up at the Skopje skyline at night, you might be surprised to see a large, illuminated cross in the background. Built in 2002, the Millennium Cross stands 217 feet tall and is located at the top of Vodno Mountain. Originally built to be a symbol of Christianity and a memorial, it has also become a tourist destination because it is one of the best observation points in the area, offering a panoramic view of the city. A cable car, built in 2011, includes 30 gondolas to take you up to the mountain on a ride that takes less than 10 minutes. If you want a panoramic view of Skopje, the Millennium Cross is the place to go.

As you can see, there is plenty to keep you entertained in Skopje. Beyond being one of the lowest-cost capitals in Europe, you’ll find amazing food, natural beauty, a fascinating history, and a one-of-a-kind quirky capital city. Let the masses go to Paris, Rome, Madrid, and Stockholm—if you want a change of pace, head to Skopje. You will find a lot there to charm you.