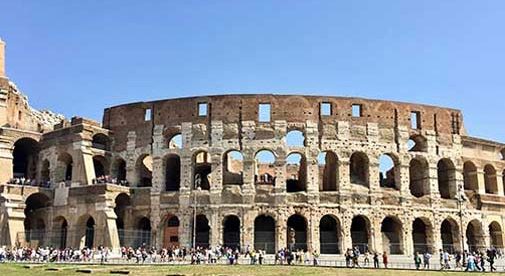 As rain fell on Rome’s Via della Conciliazione, the drops clung to the umbrella over our heads like translucent beads of light reflecting the dim street bulbs outside St. Peter’s Square.

Normally a bustling, street-side market during the day, where baristas purvey coffee and gelato to busied tourists, Caffe’ San Pietro was quiet in this waning hour. My wife and I chatted as the damp loosened the city streets from the grips of long-gone pedestrians, and soon we felt Rome emptied. All to ourselves. Only then did we realize this is how Rome should be experienced.

However, Rome shouldn’t be seen like this. Instead of running from one tourist sight to another…take your time getting from one place to another. Of course you should visit the landmarks which are synonymous with the city, but look out for everything in between those sights too. Rome’s history is evident in the structures, sounds, sights, and smells of this city.

Rome is a large city with a small, familiar feeling. Extremely walkable, you’ll do yourself a great favor by staying on the east bank of the Ponte Sant’Angelo, the iconic bridge that connects Rome’s Vatican Square district to the more historical districts of east Rome. This area, administratively, is known as the 22 Rioni (regions), and make up the collective center of Rome.
This area is idyllic not only in its beauty along the Tiber River, but in the convenience of the location. Equidistant from the Vatican, Piazza Navona, Fountain of the Four Rivers, Museo Roma, Trevi Fountain, and the Pantheon, the area gives you the ideal opportunity to see much without overstressing about how to get there.

And, this is an area that’s highly affordable given the location. The small blocks and tight streets make it a less attractive area for chains or luxury hotels, giving way to smaller, local boutique hotels such as the Residenza Ave Roma and The Wesley Hotel. There’s an element of personal attention in these establishments, all at a price of under $141 per night.

Day 1: A Stroll Through Rioni I and V

The walkability of Rome will be evident upon your arrival, especially if you’re staying along the area discussed near the Ponte Sant’Angelo. This Rione of Rome is also known as Rione Ponte due to its proximity to Sant’Angelo as well as several other vital, historical bridges in Rome. On day one, you’ll be exploring this as well as Rione V, located just east/southeast, and the continuance of more of the Old World Rome that you came to see.

Walking east from the Tiber toward Piazza Navona, you’ll begin to understand how Rome sneaks up on you one marvelous structure at a time. The architecture is microcosmic of the city itself, as the blends of new, old, and ancient form a sliding-doors prismal experience. Walking these streets and alleys in Rome gives you the feeling of viewing the past from present day, while also doing the same in reverse. Crumbling ruins exist beside blocks of burgeoning new hotels, as children, tourists, locals, and Vespas sprawl neatly across the streets.

Piazza Novona is the ideal kicking-off point for day one, as here you’ll find the Fountain of the Four Rivers, Museo Roma, and Sant’Agnese in Agone—the 17th-century baroque cathedral that dominates much of Piazza Navona’s perimeter. This is a great area to stroll, sit in small cafes watching street performers, passers-by, tourists, and even catch a carriage for a romantic buggy-ride through the city.

You can spend hours strolling around Piazza Navona. In fact, within a thousand feet radius you’ll find gorgeous mid-century cathedrals, including Santa Maria della Pace, numerous museums, piazzas, and ancient structures such as the Pantheon and Hadrian’s Temple, built in the 2nd century AD.

From here you can continue east toward the famed Trevi Fountain. While the Trevi is certainly a masterpiece and something you’ll want to absorb and photograph, the true wonder of Rome lies in the “in between” places. You’ll find that the real treasures are found when you’re walking between the destinations in your guide book. For us, one of these was the Cappella della Madonna dell’Archetto, the small but ornate chapel located near the Trevi Foundatin, but often overlooked by tourists despite its brilliance.

Rome isn’t just all about thousand-year-old temples and artwork, however. In fact, the city has a number of pristine parks within its rioni, including Giardini di Montecavallo, an ornate garden complex located near Piazza Venezia. Heading this direction is ideal, as in Piazza Venezia you’ll find the Alter of the Fatherland, the 19th-century building from which Mussolini delivered his most important speeches in the lead-up to WWII.

The end of day one leads you beyond the Altar of the Fatherland to two of the structues you’ll want to make a point of seeing—the Colosseum and the Roman Forum. Located directly across from each other, if the Colosseum and the Roman Forum represent “too much to chew” on a first day full of leisurely strolling and site-seeing, you’ll have no problem returning on day two—the day of the Vatican.

Your second day in Rome takes you into a completely different country, Vatican City. One major piece of advice, when visiting the world’s smallest country, and administrative site of the Roman Catholic Church, start your day with an early-entry pass into the Vatican Museums, which can be obtained from numerous excursion vendors online for just $4 extra. And, be prepared for a very early start to your day, as you will need to meet your guide around 7 a.m. But rest assured this early entry is worth every missed minute of slumber.

As you spend hours in the Vatican Museum prior to actual public entry, you’ll be glad you paid the extra money for the early entry pass, as what you’ll receive is a very personal and private experience of the innermost workings of the center of Christendom. Taking your time in the Vatican Museum, you’ll exit to the immediate shock of the entry queue you avoided, which quickly wraps around the block.

For art lovers, the density of brilliance in the halls of the Vatican Museum is intoxicating. Gilded hallways lead to corridors containing genius works such as The School of Athens and Michelangelo’s The Last Judgment. Perhaps the crowned jewel of these museums is the Sistine Chapel. Michelangelo’s 15th-century masterpiece is among one of the great artistic accomplishments in human history, and is just as compelling today as it was in Michelangelo’s day.

The hours you saved avoiding the morning lines at the Vatican will give you additional time at St. Peter’s Basilica, strolling St. Peter’s Square, and enjoying the peaceful serenity as street musicians and performers serenade your view of the rolling Tiber River. This area, outside Castel Sant’Angelo, is an ideal location for photophiles, couples in love, or simply those who want to slow down and watch the Roman day pass them by.

If you want to revisit anything you missed on day one, a $18 taxi ride will take you back to the Roman Forum and the Colosseum, where you can enjoy a nightcap enjoying some of Rome’s best evening views and food that can’t be found anywhere else. During off-season, make sure to visit the Collusem before 3 p.m. for guaranteed entry.

Day 3: An Open Canvas in the Outer Rioni

By the end of two days in Rome, you’ll have seen all the major sites in the center of the city. Day three is the day to look to the outer rioni, where you’ll find everything from the mystery of catacombs and famous mausoleums to the beauty and elegance of one of Rome’s most beautiful parks.

Heading north down the Tiber from Ponte Sant’Angelo, you’ll enter Municipio II, Rome’s second largest administrative district. This is perhaps one of the oldest areas of the city outside of the main tourist districts.

A great place to start your day is at the Villa Borghese Gardens. This serene park is built in the style of the English nature reserves of the early 17th century, and has impressive museums, manicured natural scenery, and even a replica of Shakespeare’s Globe Theatre in London. Perhaps the most extensive gardens built in Rome since antiquity, the garden is a place to reflect in the presence of a nearly untouched wonder.

Near the Borghese Gardens, Rome’s story becomes a little darker. The Catacombs of Priscilla, ancient burial tombs used for Christians between the 2nd and 4th centuries, somehow have a feeling of being older than Rome, itself. Some of the earliest martyrs are buried here, as well as two 3rd-century popes—Marcellinus and Marcellus I. Take your time here to explore not only the catacombs, but the presence of some of the earliest Christian artwork in the form of wall frescoes depicting early Christian tales.

Delve deeper into Rome’s past at the Mausoleo di Santa Costanza, a 4th-century church and mausoleum believed to be the burial site of an early virgin-saint, Saint Agnes. The church was built as the resting place for Constantina, the daughter of Constantine I. Here you can see the integration of the early Christian church with pagan influences that Constantine merged together during his reign in the 4th century.

We end our time in Rome, as we always do, by calling back to the area we’ve centered on. You’ll want to take another stroll through a famous Roman piazza near the Tiber, or perhaps have a crisp Merlot as the moon sets over your final day in this timeless treasure.